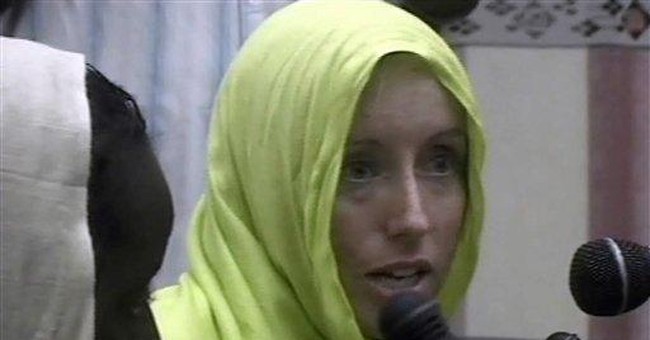 The genocide in Darfur is no longer a trendy, breathless global cause. But the women of Darfur haven't gotten the message.

On May 15, a woman near the Al Hamadiya Camp in Zalingei was collecting firewood. Three armed men in khaki uniforms raped her, stabbed her in the leg, inflicted genital injuries and left her bleeding. She spent 45 days in the hospital. In 2003, the same woman had been raped and shot while fleeing her village.

Her story is contained in a recent, exhaustive, chilling report on Sudan, written by a panel of experts at the United Nations. A U.N. official told me, "We have not talked to a single woman (in Darfur) who has not stated that sexual violence is their first concern." The panel documented sexual assault against pregnant women and 12-year-old girls. Prosecutions are nonexistent. Local officials are indifferent.

The Darfur revealed in the report is a heavily armed state of nature. Uniformed troops, Janjaweed militias and rebel groups all abuse civilians. The Sudanese government routinely violates the Darfur arms embargo imposed by the U.N. Security Council in 2004, unloading weapons, according to the U.N. official, "openly, in front of you." Arms and ammunition manufactured by Chinese companies can be found everywhere. Child soldiers are recruited. Political dissent is repressed.

This is not, at present, the active phase of Darfur's genocide, involving mass attacks on civilians. Instead, it is the evidence of a genocide that has already succeeded. The Sudanese regime achieved its policy aims -- targeting disfavored ethnic groups, destroying their way of life and forcing millions into camps. And now it is threatening to forcibly relocate these victims in 2010 -- a plan of Stalinist scale and brutality.

Global attention has been diverted by the complexity of the conflict, the unsympathetic nature of Darfur's fractious rebels, and the threat of renewed war between Sudan's north and south -- a war that would overwhelm the region.

But the suffering in Darfur is also being actively hidden from view. In March, the Sudanese regime expelled several international relief organizations, including those dealing with sexual violence. This cut an important pipeline of humanitarian information to the outside world -- which was precisely the goal. Sudan's regime is pulling a curtain across Darfur, which may also be a shroud.

The Obama administration's lengthy review of American Sudan policy culminated in October with more of a whimper than a bang. The administration presented Sudan with a choice between two roads: one path of cooperation, engagement and incentives; the other of defiance, isolation and disincentives. But neither carrots nor sticks were specified. And the administration seems internally divided on how the engagement of Sudan -- lifting sanctions, moving toward more normal relations -- should proceed. U.N. Ambassador Susan Rice wants such benefits to follow major concessions by Sudan's government. Scott Gration, the special envoy to Sudan, would distribute carrots liberally and pre-emptively.

But all this has been tried before. The Sudanese regime receives small threats with insolence. It views minor American concessions as signs of weakness.

The administration's Sudan policy was produced by an exhaustive, interdepartmental process in which no one won or lost completely. As a part of the previous administration, I saw this kind of process at work -- and it is incapable of producing boldness.

Yet boldness is needed -- much larger carrots and much larger sticks. The ultimate carrot would be to offer Sudan's leader, Omar al-Bashir -- currently under international indictment for war crimes -- the legitimacy he seeks, in exchange for the peaceful independence of south Sudan and unconditional cooperation in Darfur. This would be distasteful. But it might be worth repressing our gag reflex to gain permanent, irreversible limitations on the power of Sudan's regime to do harm.

This approach, however, could not succeed without serious consequences for its rejection -- economic, political and military pressure, by a coalition of willing nations.

No bureaucratic process would produce such ambitious options. Only a president and his secretary of state can insist on boldness.

The world looks at Darfur and responds, in effect: We can live with that. There are many in Darfur, however, who will not live.