The Limits of Star Power 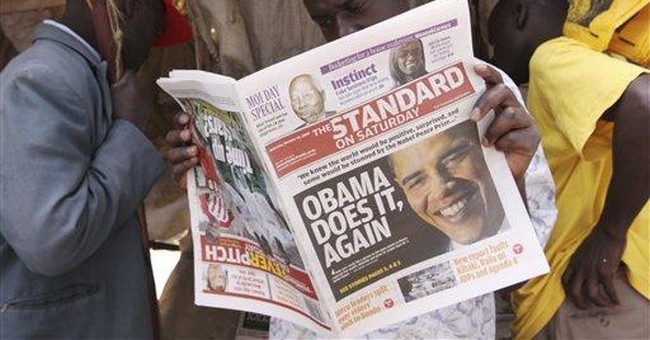 Even Obama could not claim that he personally deserved the award. "I do not view it as a recognition of my own accomplishments," he said -- which was simple realism, not false humility. Those who credit Obama's nine undistinguished months for this honor display a panting infatuation even stronger than Obama's healthy self-regard.

Others, however, embraced the award in a more sophisticated manner -- not as a tribute to Obama but as a symbol of America's revived popularity in the world. It is a good thing, the argument goes, for an American president to be loved by foreigners, even if their sloppy display of affection is embarrassing.

But this point needs to be argued, not merely assumed. How does American standing translate into effective diplomacy? And what role does presidential popularity play in building national standing?

The first, most important, element of national standing is credibility -- the perception that a nation will act in its vital interests and do what it has promised. It is the combination of American power and credibility that causes other nations to change their behavior in ways favorable to our interests. But power and credibility often attract resentment, not love. President Reagan was unpopular in Europe while pursing policies, such as the deployment of medium-range nuclear missiles, that weakened the Soviet Union.

How is Obama's credibility? His initial decisions on Iraq and Afghanistan were generally responsible. His unilateral abandonment of missile defense agreements with Poland and the Czech Republic, his tolerance for engagement without outcomes, his dithering on Afghanistan policy, all raise serious questions on this score.

A second element of national standing is reputation -- the general good will toward our country, which allows for American action in the world without constantly fighting suspicion and hostility. Over the last several decades, certain images of America -- the Marshall Plan, the Peace Corps, the President's Emergency Plan for AIDS Relief -- have demonstrated that America's conception of its global interests is neither narrow nor selfish. The inauguration of a president with African roots was one such inspiring image. But Obama -- focused almost entirely on domestic matters -- has yet to add any significant contributions to this humanitarian history. And his demotion of human rights issues in the relentless pursuit of engagement has left many human rights advocates concerned.

The final measure of American standing is the personal popularity of its current leader. Here Obama has achieved wonders, especially in Europe. According to the Pew Global Attitudes Survey, an extraordinary 93 percent of the Germans and 91 percent of the French express confidence in Obama to "do the right thing in world affairs." The Norwegian Nobel Committee is not alone in its crush.

But this adoration does not indicate support for American policy views. According to Pew, these improvements are "being driven much more by personal confidence in Obama than by opinions about his specific policies." Which means that Obama's personal standing has not translated into any public pressure on European politicians to change policy positions -- say, to provide more help in Afghanistan, or to take terrorists from Guantanamo. Former Republican Sen. Jack Danforth has described the practical effect of these European attitudes bluntly: "What it really says is we will follow the U.S. provided the U.S. doesn't want to lead anywhere."

What does it mean to "do the right thing in world affairs"? For Europeans, this essentially means pacifism. A recent trans-Atlantic poll asked if the use of force can ever be "necessary to achieve justice." Seventy-one percent of Europeans said "no," while 71 percent of American said "yes." In general, Europeans believe that nothing -- not peace, or freedom, or security, or the rights of the weak -- is worth fighting for. It is an attitude Europeans can afford to hold because America has chosen to defend them. But it is not a view that an American president can share, or ultimately appease.