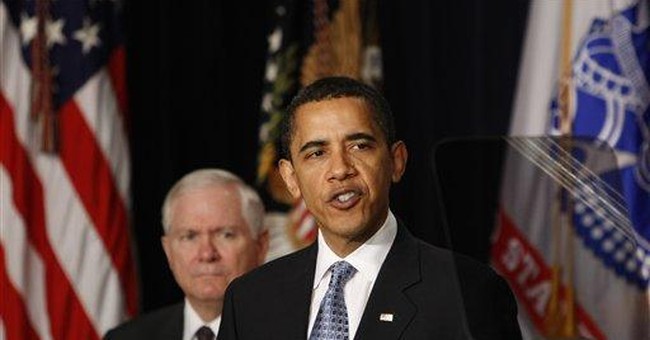 WASHINGTON -- Budgets are the coldest of documents -- flat, gray realms of numbers and projections. But when referring to the origins of the recently proposed defense budget, Secretary Robert Gates, normally precise and analytical, speaks with an intensity that comes close to emotion. "What started me down this road was Walter Reed," the Army medical center where wounded soldiers were treated in squalid conditions. "There was a set of assumptions through the first several years of the war that it would be over very soon. So don't spend on a facility that would be closed."

Again and again -- on flawed body armor, the vulnerability of vehicles to roadside explosives, the insufficient number of Unmanned Aerial Vehicles (UAVs) in Iraq -- Gates encountered a Pentagon focused on priorities other than fighting the irregular conflicts in which America is engaged. Iraq and Afghanistan were often treated as temporary distractions from the real military mission of preparing for future conventional wars. Whenever a problem emerged for "people in the field," Gates was amazed "how long and hard it was to remedy that problem."

The initial remedies were necessarily ad hoc, including mine-resistant vehicles and better intelligence. "In every case," Gates told me, "the problem had to be addressed by going outside the bureaucracy, creating something unique."

Gates' budget is a more systematic response -- his attempt to provide "a place at the table for the guys fighting the wars we are in." While downsizing or eliminating some expensive, high-tech programs, the budget would increase resources for health care, intelligence, reconnaissance, Special Forces, theater missile defenses, helicopters and UAVs. It is more of a shift than a revolution -- Gates estimates that only about 10 percent of the budget is devoted exclusively to irregular warfare -- but moving the balance in this direction is entirely necessary.

There are two broad objections to this budget. First, some argue that the total level of spending is insufficient. The success of the surge in Iraq has demonstrated that the size of our force matters when it comes to counterinsurgency operations. Also, the new budget does not expand the Army sufficiently to avoid the continued need for National Guard and reserve deployments.

In an interview in his Pentagon office, Gates gingerly calls this a "legitimate debate." But he counters that the size of the military has been increasing over the last several years. "Am I saying this is the right number? Maybe, or maybe not. Having increased by 100,000, we might take a pause and see if we can sustain it." Gates argues that the inclusion of more spending in the regular defense budget, instead of in emergency supplemental spending bills, is essential to sustainability -- "so it doesn't disappear when supplementals disappear."

Gates is unapologetic about cutting back on big-ticket items such as the Army's Future Combat Systems. The program's lightly armored vehicles, he notes, have 18-inch clearances and flat bottoms -- perfect targets for roadside explosives. On the other hand, Gates' missile defense cuts are relatively small, especially compared to the declared intention of some congressional Democrats to eliminate the Missile Defense Agency entirely.

The second objection concerns the rise of China, which some believe may lead to a conventional conflict. Gates is not dismissive of China, which is expanding its naval influence and focusing resources on space- and cyber-warfare. But he contends that the "Chinese are being selective in what they are doing. They learned from the Soviet Union, which we bankrupted in an arms race. ... They are looking at asymmetrical areas, so they don't get engaged in a full-scale arms race." And this allows America to be selective in our response. He argues that the proposed "mix" of F-22 and F-35 fighters, along with advanced UAVs, will be an effective counter, and that massive ground forces, in this case, are irrelevant. "Realistically, when would we have proposed to send a large ground army into Asia? In every case, that has been very painful."

Some Republicans want to polarize the budget debate. The Obama administration, according to Sen. Saxby Chambliss, R-Ga., is "willing to sacrifice the lives of American military men and women for the sake of domestic programs favored by President Obama."

In this case, the charge rings with irresponsibility. While the total defense budget should be larger in a time of war, it focuses resources and attention precisely where they are most needed: on our war fighters in Iraq, in Afghanistan -- and at places like Walter Reed.