Small Men in a Large Crisis 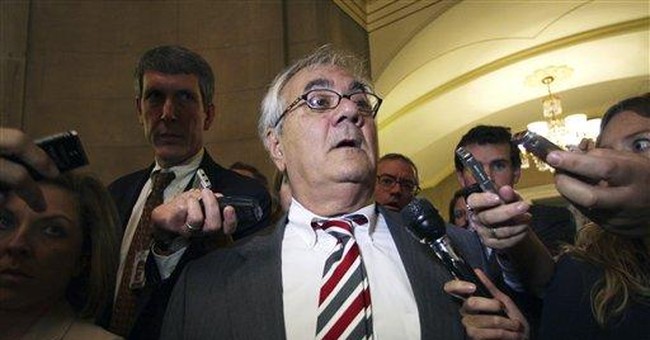 WASHINGTON -- America's economic crisis has become a political crisis -- with the second now compounding and exceeding the first.

In the last few days we have witnessed something extraordinary: the revolt of ideology against authority, even against reality. The Bastille of establishment opinion has been stormed and taken, at least temporarily. But the revolution has irresponsibility in its soul.

Seldom has America's governing elite been more united in response to a national challenge. The president, the secretary of the Treasury and the chairman of the Federal Reserve were adamant about the need for government to purchase illiquid assets that are clogging the arteries of the credit markets. The leadership of both parties in both houses of Congress, after some reasonable modifications, endorsed the plan. Both presidential candidates also supported it -- one suspending his campaign to push for it. Even young conservative firebrands in the House such as Paul Ryan and Eric Cantor, after gaining significant concessions, came to reluctantly embrace it.

The consensus included everyone who matters -- except 133 mainly conservative House Republicans, along with 95 Democrats, who combined to destroy it.

There can now be little doubt that Nancy Pelosi has an unrivaled record for lacking achievement. In retrospect, it seems incomprehensible that Democrats chose a grating, partisan, San Francisco liberal to lead both parties in the House. During the bailout debate, Pelosi used her last breath to channel the shade of Henry Wallace, attacking conservative economics as a "right-wing ideology of anything goes, no supervision, no discipline, no regulation." When one thinks of the skills of the speaker of the House, (BEG ITAL)rubbing your face in it before a vital vote(END ITAL) is not usually high on the list. House conservatives were insulted -- then watched as some of Pelosi's committee chairmen and closest political associates voted against the bill. Seeing Democrats saving their political hides provided little encouragement for Republicans to risk their own.

That risk, in the current political environment, was not an easy one. Some House Republicans I talked with reported little sense of urgency among bankers and financial leaders in their own districts -- the real economy in many places has not reached the level of panic on Wall Street. Public reaction to the plan was overwhelmingly negative, which is not irrelevant to politicians facing the voters in about a month. And some ideological objections were deeply felt. "During the 1917 Bolshevik Revolution," said Rep. Thaddeus McCotter, R-Mich., on the floor, "the slogan was 'Peace, land, and bread.' Today, you are being asked to choose between bread and freedom."

But whatever their provocations, pressures and justifications, House Republicans once again revealed the souls of backbenchers -- spouting their ideological purity from atop the ruins of the financial system. The temporary government purchase of bad mortgage debt is not equivalent to the liquidation of the kulaks. Serious conservative thinkers such as Ryan and Cantor, who chose to work within the legislative process, got many of the improvements they sought. But most House Republicans with ideological objections had nothing better to propose and no intention to try. They chose allegiance to abstract principles over practical reality. It is the political philosophy of Samson: Bring down the entire temple to make a political point. In this case, the president, their own congressional leadership, their own presidential candidate and the world economy are now wounded and struggling amid the rubble. I suppose the point is made. But it is a reminder of why Republicans are no longer trusted as the congressional majority.

America is left with one portion of one branch of government that does not seem to work. House Democrats seem temperamentally incapable of building genuine consensus on issues that matter. Many House Republicans seem so alienated from the mainstream policy consensus that they inhabit a different world. One wonders if any emergency short of an invasion of American territory would unite them. Even then, Pelosi would probably blame the conflict on cowboy diplomacy, House Republicans would talk of the natural fruits of McGovernism, and the vote on declaring war would be close.

Though some compromise may eventually be passed, it is now clear that American political elites have lost the ability to quickly respond to a national challenge by imposing their collective will. What once seemed like politics as usual now seems more like the crisis of the Articles of Confederation -- a weak government populated by small men. And this must be more frightening to a world dependent on American stability than any bank failure.