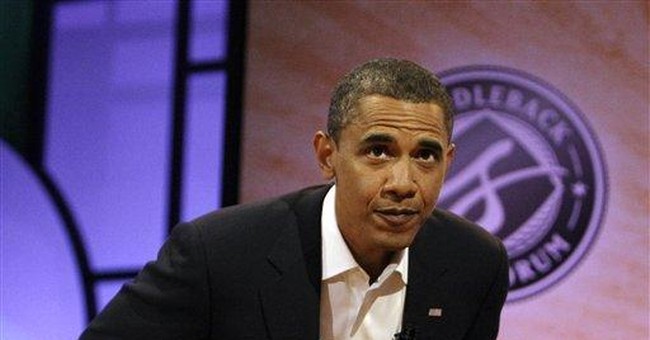 WASHINGTON -- It is now clear why Barack Obama has refused John McCain's offer of joint town hall appearances during the fall campaign. McCain is obviously better at them.

Pastor Rick Warren's Saddleback Civil Forum on the Presidency -- two hours on Saturday night evenly divided between the relaxed, tieless candidates -- was expected to be a sideshow. McCain and Obama would make their specialized appeals to evangelicals as if they were an interest group such as organized labor or the National Rifle Association. Evangelicals would demonstrate, in turn, that they are not rubes and know-nothings. And Americans would turn en masse to watch the Olympics.

What took place instead under Warren's precise and revealing questioning was the most important event so far of the 2008 campaign -- a performance every voter should seek out on the Internet and watch.

First, the forum previewed the stylistic battle lines of the contest ahead, and it should give Democrats pause. Obama was fluent, cool and cerebral -- the qualities that made Adlai Stevenson interesting but did not make him president. Obama took care to point out that he had once been a professor at the University of Chicago, but that bit of biography was unnecessary. His whole manner smacks of chalkboards and campus ivy. Issues from stem cell research to the nature of evil are weighed, analyzed and explained instead of confronted.

This approach has a genuine appeal to some voters, especially of a more liberal bent, who believe there is a nuance shortage in American life. But on Saturday night it did not compare well with McCain, who was decisive, passionate and surprisingly personal. The candidate who once seemed incapable of the confessional style of politics talked at length of Vietnam experiences and his adopted daughter from Bangladesh. Asked by Warren about his greatest moral failure, McCain's response -- "the failure of my first marriage" -- had an abrupt and disarming authenticity. The account of his hardest decision -- refusing release from captivity ahead of others who had been imprisoned longer -- remains shocking in its valor. And McCain's habit of understatement -- he described the excruciating rope torture he experienced in Vietnam as "very uncomfortable" -- makes his stories even more effective.

Second, the Warren forum demonstrated how difficult it will be for Obama to appeal to religious and conservative voters as the campaign proceeds. His outreach to evangelical voters is obviously sincere, but he doesn't actually agree with them on much. In the course of the forum, he endorsed federal funding for embryonic stem cell research in spite of the existence of humane and promising alternatives. He proposed controversial government regulations on faith-based charities that accept federal funds. He attacked Justice Clarence Thomas as unqualified and defended his vote against the confirmation of the widely admired Chief Justice John Roberts. Obama deserves points for honesty on all these issues, but it is possible to be honestly off-putting.

Obama's response on abortion -- the issue that remains his largest obstacle to evangelical support -- bordered on a gaffe. Asked by Warren at what point in its development a baby gains "human rights," Obama said that such determinations were "above my pay grade" -- a silly answer to a sophisticated question. If Obama is genuinely unsure about this matter, he (and the law) should err in favor of protecting innocent life. If Obama believes that a baby in the womb lacks human rights, he should say so -- pro-choice men and women must affirm (as many sincerely do) that developing life has a lesser status. Here the professor failed the test of logic.

For many evangelicals, the theoretical Obama -- the Obama of hope and unity -- is intriguing, even appealing. But this opinion is not likely to improve upon closer inspection of his policy views. Obama is one of those rare political figures who seems to grow smaller the closer we approach him. "I want people to know me well," said Obama at the forum. Among religious conservatives, that may not be an advantage.

Finally, McCain's performance at the Warren forum helps change the political psychology going into the conventions. Republicans have spent the last few weeks pleasantly surprised at the closeness of the presidential race. But they have generally chalked this up to Obama's weakness, not McCain's strength. After Saturday night, even Republicans most skeptical of McCain must conclude: "Perhaps we aren't doomed after all."

Of such small hopes are large upsets made.