Here's Why the Left and Right Really Need Each Other

Michael Brown
|
Posted: Sep 08, 2017 12:01 AM
Share   Tweet
The opinions expressed by columnists are their own and do not necessarily represent the views of Townhall.com. 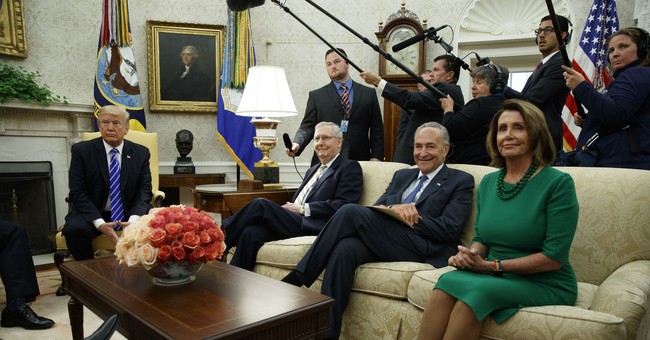 “You can’t fly without two wings, a left wing, and a right wing.”

I have to admit I was surprised to hear my friend say this. After all, he was a strong conservative, socially, morally, spiritually, economically, and militarily. He told me that, as he was praying one day, he felt he received this insight: Just as a plane or bird can’t fly without two wings, so also America, to be healthy, needs two wings, a left, and a right.

I believe so, although I don’t for a moment believe that truth is relative so that both the left and the right have “their” truth.

And I do believe there are hills on which we should be willing to die.

So, when it comes to issues like abortion or redefining marriage, there’s not an inch of compromise in me. God is against the shedding of innocent blood, including in the womb, and marriage is the union of a man and a woman.

But that doesn’t mean that the left has nothing to offer or say to someone like me on the right. To the contrary, those on the left often provide a much-needed perspective without which the right can become imbalanced. (Obviously, I believe the right has much to say to those on the left as well.)

Let’s take the issue of abortion.

All my pro-life colleagues seem to care deeply for both the baby and the mother. But some of us can be so passionate about protecting the life of the unborn that we forget about the hurting mother. Why, after all, is she considering an abortion? Is she economically stricken? Is she overwhelmed by the size of her current family? Is she fighting depression?

To be clear, abortion is never the answer, and so the left is dead wrong in promoting abortion as an option. But that doesn’t mean that the left can’t speak to us on the right and say, “Will you please care for the mother as much as you care for the baby?”

Again, my point is not to make a false moral equivalence, as if a grown woman who makes a choice to have sexual relations with a man (we’re not talking about rape here) is the same as a helpless child in the womb. Rather, my point is to say that not everyone who is “pro-choice” is a heartless baby killer. Some of them are also moved by compassion, albeit with massive, fatal blind spots.

On the one hand, we’re speaking about intense, socially divisive issues, issues that threaten to undermine our most foundational liberties and damage our most fundamental social structures. On the other hand, we’re speaking about people, human beings with feelings and emotions, human beings who care about each other and want to spend their lives together.

This was underscored to me recently in an email I received from a lesbian woman. For several years, she had privately believed Christian doctrine to be true but was in a relationship with another woman. After some time, she broke up with her partner and tried to become part of a Bible-believing church. But, according to her story, in congregation after congregation, she was rejected. (In her words, she looked like the stereotypical, butch lesbian and so, didn’t fit the expected mold.)

She ended up attending “affirming” churches – churches that affirm same-sex “marriage” and transgender identity – and was warmly welcomed. She was not marginalized because of her appearance or rejected because of her romantic attractions. This is highly commendable. At the same time, she did not hear the truth of the gospel. That is quite contemptible.

From my perspective, as someone on “the right,” I cannot affirm homosexual relationships, meaning that I will use scare quotes when I refer to same-sex “marriage.” But in doing so, I realize that I will hurt same-sex couples. They will take those scare quotes as an attack on their very personhood, not to mention a condescending slam on their relationship.

How then do we proceed?

I would argue that the primary role of the local congregation should be compassionate outreach (as opposed to political activism), without compromising God’s truth or standards in the least. Let everyone who walks through the doors of the church building feel loved and cared for. It should also be known that the congregation stands for conservative, biblical values and that it supports those who are called to address the divisive moral issues of the day.

We face a similar problem when it comes to immigration, although, from a biblical perspective, the lines are not as clearly drawn here as they are when dealing with abortion and homosexuality.

Focusing on DACA, conservatives are right to say that President Obama was guilty of executive overreach, that a nation without laws is not a nation, and that we cannot exist with open borders. Liberals are right to ask, “What about all the people who will be affected? What about the young adults who grew up here in America, law-abiding people for whom this nation is home and who are fully integrated into our society?”

Whatever solution Congress and/or the President find, it must be both right and fair, both ordered and principled, both correct and compassionate. This will not happen unless the left and the right have ongoing, open and candid conversations.

Speaking for myself, on all the issues that divide us, my door is always open for discussion. Even if you don’t move me from my convictions, I’m sure I can benefit from hearing your perspective.