It’s Time to Call out the Left’s Hypocrisy

Michael Brown
|
Posted: Nov 16, 2016 9:02 AM
Share   Tweet
The opinions expressed by columnists are their own and do not necessarily represent the views of Townhall.com. 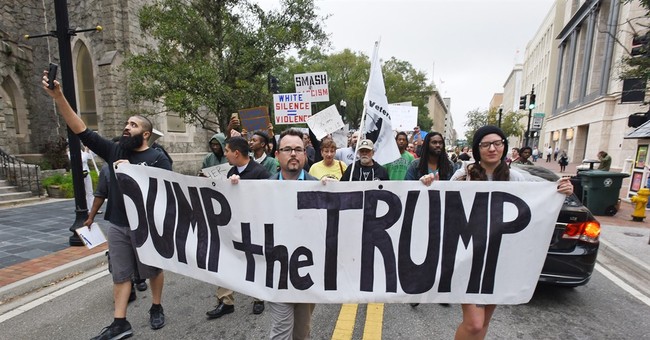 Please allow me a moment to vent.

I assure you that it will be controlled venting, without vitriol, hyperbole, or vindictiveness.

But venting it will be. Shall we call it holy venting?

Perhaps it will also reflect some of the holy frustration in your own heart.

But first, some caveats.

I do understand why many Americans are deeply upset with Donald Trump’s election, and up until election day, I said that I respected those who could not vote for him, urging them instead not to vote for Hillary.

What, exactly, will the president’s immigration policy look like, and what, exactly, does he mean by being a “law and order” candidate? And why is it that so many far-right groups both here and abroad are excited about his victory?

I have also heard from enough concerned women, some very close to me, to recognize just how offensive his comments and attitudes have been and to see why they can’t fathom how a God-fearing Christian could vote for him.

And I understand why his high-level appointment of Steve Bannon is so controversial, despite the apparently

But having said all that (as a representative sampling of major caveats), I am sick and tired of leftwing hypocrisy, and it needs to be called out.

Let’s focus first on the demonstrations.

I agree that people have a legal right to demonstrate (but not break the law), and it’s understandable that people are frustrated. But a lot of what’s happening is simply the immature reaction of those who don’t know how to lose or to accept responsibility for why they lost.

Ironically (but not unexpectedly), we’re learning that many of those protesting didn’t even vote, so they’re blocking traffic and setting things on fire because of their own lack of participation.

Rather than shouting profanities in the streets, they should be looking in the mirror.

Pollster Frank Luntz tweeted, “I saw a Trump protester with a sign on the subway… He said he was 19… I asked him if he voted, and he said no.” And a report from Portland, Oregon indicated that, “More than half of the anti-Trump protesters arrested in Portland didn’t vote, according to state election records.” What do you know!

And right on cue, race-baiters and responsibility-evaders have raised their heads, claiming that, “The Electoral College Is an Instrument of White Supremacy and Sexism.”

A group of civil rights leaders has also stated that, “While racial voter suppression was widespread, voter suppression was generational as well. Millennials, as a multiracial demographic, also were targeted by strict ID laws and poll closings affecting millions of youth, college and high school students, as well as young professionals.”

You mean to tell me that is why millennials, along with blacks and Hispanics, did not turn out in the expected numbers? It had nothing to do with lack of enthusiasm for Hillary Clinton?

As for “strict ID laws,” give me a break. It’s outrageous that voter ID is not universally required, and there are more than enough examples of voter fraud coming to the surface every day.

And it is nothing less than absurd to claim that early poll closings particularly affected “millions of youth, college and high school students, as well as young professionals,” as if they of all people can’t make it to the polls on time while older professionals and non-students can.

This is nothing less than the victim mentality that is destroying the left.

So, go ahead and protest, but please don’t call it love. And quit playing the blame game.

How about the left’s selective outrage with respecting the election process and the rule of law?

The outcry against Donald Trump was shrill when he said that he could not guarantee in advance that he would accept the outcome of the elections for fear that things would be rigged.

Yet now, in the aftermath of those elections, government officials as high as Chicago’s mayor, Rahm Emmanuel, and the Los Angeles police chief, Charlie Beck, have stated that they will defy the order of the president to deport illegals from their city should such an order be made – and Trump has most recently stated that he is referring to illegals who have committed crimes here.

Yet Emmanuel emphasized that, “Chicago will always be a sanctuary city,” while Beck said, “We are not going to engage in law enforcement activities solely based on somebody’s immigration status. We are not going to work in conjunction with Homeland Security on deportation efforts. That is not our job, nor will I make it our job.”

There might be nuances to what these men are saying, but again, it’s the issue of hypocrisy.

Just imagine how the leftwing media would be responding had Hillary been elected and a Republican mayor or police chief declared that they would not heed her directives. If they were men, they would have certainly been branded sexist, and the media outrage would be extreme.

And since I mentioned Steve Bannon earlier, let’s compare the leftwing media’s almost hysterical reaction to his appointment as Trump’s chief strategist – as if Trump had appointed a neo-Nazi to that position – to that same media’s lack of strong reaction to the possible appointing of Muslim congressman Keith Ellison to the DNC chair.

Fox reported that, “Democratic leaders are scrambling to unite behind a candidate for the party's chairmanship – and have landed for now on a Louis Farrakhan-linked congressman who once called for Dick Cheney’s impeachment and compared George W. Bush to Hitler.”

Apparently, these charges are of little or no concern, but the charge that Bannon is a racist or anti-Semite – a charge vigorously disputed by a Catholic priest, an Orthodox rabbi, and a Harvard professor, among others – is worthy of outrage.

Why the glaring double standard?

And how many in-depth investigative reports did you hear about Hillary Clinton’s right-hand woman, Huma Abedin, and her alleged connections to radical Islam?

Just imagine if Bannon had the same baggage as did Ellison or Huma. The leftwing media would have even more of a field day. (Again, I’m neither defending Bannon or accusing Ellison or Huma; I’m addressing the left’s inconsistency and hypocrisy.)

And on and on it goes, with example after example of extreme leftwing hypocrisy.

But I’d best stop here rather than belabor the point.

And the truth be told, that felt good.

Perhaps you feel better as well?