Fee, Fi, Fo, Fum: I Smell the Marks of Trans-Activism

Michael Brown
|
Posted: Aug 09, 2016 12:01 AM
Share   Tweet
The opinions expressed by columnists are their own and do not necessarily represent the views of Townhall.com. 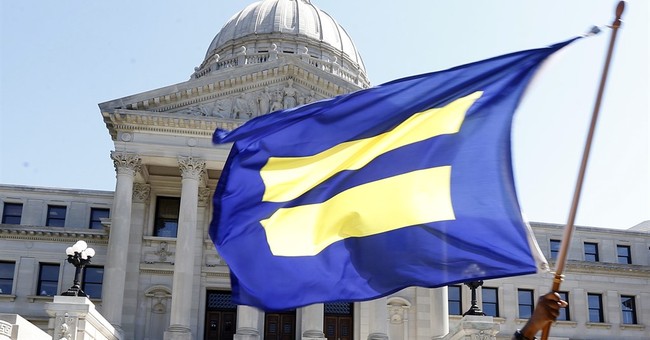 No amount of compassion for a young person struggling with gender identity issues can justify the radical transformation of the English language, yet that is exactly what is being called for by transgender activists.

For anyone following the progression of LGBT activism, this is nothing new. (See, for example, the chapter “Lavender Language, Gender Speak, and Queer Semantics: Towards an Omnisexual Society?” in my bookA Queer Thing Happened to America.) But when this radical agenda comes to a school district where you live, it’s important that we speak out again, loudly and clearly.

I’m talking specifically about the Charlotte-Mecklenburg Schools in North Carolina, which in June announced the implementation of new regulations “Supporting Transgender Students.” Included in these regulations are rules for the proper use of pronouns so that, “Nonofficial records must refer to transgender student by preferred names and pronouns.” (Due to a recent Supreme Court ruling, some of this agenda has been put on temporary hold.)

In an official instructional video, “The Importance of Pronouns,” one student, who is identified as a “non-binary transgender youth” (meaning, a young person who chooses not to identify as specifically male or female) explains why he/she prefers to use the pronouns they, them, and theirs when referring to himself/herself.

Other students and faculty are expected to follow suit, and on this same video, a high school teacher says that it’s important that a transgender student be able to communicate these things at the beginning of the school year so everyone can comply.

And what happens if you fail to comply? Earlier this year, a “‘transmasculine’ teacher at an Oregon elementary school [was] awarded $60,000 by her school district as compensation for harassment she claims to have suffered on the job, including being referred to by the wrong pronoun.”

Specifically, the teacher, who was born female but chooses not to identify as either male or female, “says employees persisted in calling her hurtful terms like ‘Miss Soell,’ ‘lady,’ and ‘she.’” The school eventually agreed that that she would be called “they,” but when other faculty members wouldn’t comply, she took them to court, winning a substantial payment in the process.

What about the confusion her gender ambiguity causes for the elementary school children she teaches? That is obviously not a concern at all.

As for this emphasis on trans-correct pronouns, it appears that the sky is the limit – and remember, students and faculty are expected to comply with the trans-identified student’s request.

One individual on the Ask a Non-Binary website writes this: “These are all the gender neutral pronouns I’ve managed to hunt down but I am ABSOLUTELY CERTAINthere are several missing.”

This is followed by “I’ve also seen ‘yo’ and ‘fey’ pronouns but I have no idea how to conjugate them.  And I’m off to still hunt for more! If you know of any GN pronouns feel free to reblog and add unto the list and i’ll edit the original as well,” adding, “OH MY GOSH!! SO IMPORTANT!!”

Is your head spinning yet?

To be totally honest, I feel more sorrow than mockery when I read this list – especially when I see how important this is to those who identify as transgender – and when I see these kids talking on the instructional school videos, my heart really goes out to them. They appear to be the age of some of my own grandchildren, and I don’t doubt that they have more than their share of struggles at school.

But to repeat, no amount of compassion for a young person struggling with gender identity issues can justify the radical transformation of the English language, nor can it justify this scenario where perception becomes reality and words are created to justify these new, totally individual perceptions.

Speaking of scorecards, what if you were calling a girls’ soccer game where several transgender students were playing? It might sound like this, “Well, she made a great shot, but ze made an even better save. Thankfully, her teammate was able to score on the rebound, so hats off to kye for being at the right place at the right time. And let’s not overlook zed’s hustle!”

Lest you think I’m making up an impossible scenario, a March 23, 2016 headline on the Daily Mail website read, “‘Some days Annie is a girl, some days Annie is a boy and some days she's both’: The 12-year-old whose gender changes on a daily basis depending on how they feel.”

In New York, a well-known dance school elected “its first gender fluid prom queen sparking backlash from jealous female students angry at being beaten by a 'boy'.” Of course, the “jealous” female students were made out to be the villains of the story.

Or consider this interaction on NPR between Margot Adler and Lynn Walker:

WALKER: And then part of the intake is to say, well, what pronoun do you like today? It might be just today.

ADLER: Because Walker has clients who might be Jimmy one day, and Delores the next.

WALKER: Once you develop the habit of saying, oh, that person, that is a she, that's Delores. It doesn't matter that she looks rather like Jimmy or looks like she was called Jimmy by her parents.

Walker also stated, “We encountered high school students who said, I want you to call me Tractor and use pronouns like zee, zim and zer. And, in fact, I reject the gender binary as an oppressive move by the dominant culture.”

And now whole school districts are being required to go along with this social madness, with the enthusiastic support of the Obama administration.

I urge every student, parent, and educator to join me in saying, “While we have compassion on kids who are struggling, we refuse to turn the world upside down on their behalf, no matter what tey, ey, fae, vae, thon, per, kye, jee, lee, ne, zed, co, or bun has to say.”

The Salvation Army Has Gone Woke Too Now, and They're Losing Support
Townhall
Sam Stein says Wall Street Journal's claim that Biden has done no better than Trump regarding COVID 'lacks any real context'
Twitchy
Dance With the Guy Who Brung Ya: Democrat Freak-out Begins Over 2022
Redstate
Whose Land Did Native Americans Steal Before Europeans Stole It From Them?
PJ Media