Ferguson Must Be Redeemed 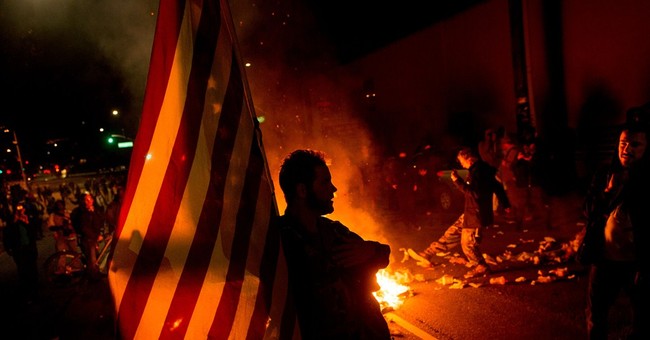 On August 22nd, I wrote an article entitled, “Five Obvious Lessons from Ferguson.” Now, in the wake of the grand jury’s decision not to indict Officer Darren Wilson in the shooting of my namesake, 18-year-old Michael Brown, and in the wake of the riots that immediately erupted, here are five more obvious lessons.

1) No verdict could satisfy both sides.

It was clear from the start that if the grand jury decided to indict Officer Wilson, many (especially white) Americans would see it as an example of the judicial process succumbing to political pressure. They would say that Wilson was condemned before the trial ever took place and that he was an innocent scapegoat offered up to quell an ugly uprising.

Conversely, it was equally clear that if the grand jury decided not to indict Officer Wilson, many (especially black) Americans would see this as yet another miscarriage of justice and one more example of why the judicial process cannot be trusted. They would use the verdict as justification for their protests, saying that this was the only voice they had.

Is anyone in the least bit surprised with the developments of the last 24 hours?

2) There’s enough evidence to support skepticism on both sides.

On the one hand, the grand jury carefully sifted the evidence for several months. Surely they delivered a fair verdict.

On the other hand, there were 9 white jurors and three black jurors. Was this fair to Michael Brown and his family?

On the one hand, there is forensic evidence pointing to a struggle in the officer’s vehicle and reports that Brown struck Wilson in the face.

On the other hand, in the newly released photographs, Officer Wilson’s face seems virtually unbruised and he did not appear to be in any rush to go the hospital for treatment.

On the one hand, there were multiple African American witnesses who supported Officer Wilson’s narrative of being charged at by Michael Brown.

On the other hand, other African American witnesses offered a very different account, including Brown’s “hands up” posture before he was shot.

Each side will believe the evidence that supports its theories, and so we shouldn’t expect this to change for a long time to come, barring definitive video evidence, which, from all accounts, does not exist.

3) This is not about Ferguson.

If the shooting of Michael Brown was an isolated incident, then the protests would make no sense. But it is not. It points to a much larger, national issue, one that runs deep in the psyche of black America.

A white reader might say, “But that’s because of all the crime in black neighborhoods. What do you expect police to do?

A black reader would respond, “We’re all for justice, but you don’t have the slightest clue of what we have had to put up with just because we are black.”

Although my life experience is that of a white American, I have talked with far too many black Americans – primarily Christians, with great respect for the law and with a desire to honor authority – who have shared their horror stories with me, and so I do not dismiss their perspective.

That does not for a moment make Officer Wilson guilty (my own sentiments are to trust the grand jury) nor does it justify the protests, let alone riots.

But it does mean that, rather than focusing on Ferguson, we must look at the larger national issues.

4) The Ferguson tragedy must be redeemed.

Regardless of the guilt or innocence of Michael Brown or Darren Wilson, the Ferguson tragedy must be redeemed, and that can only happen when we sit down and listen to each other, not talk past each other.

I don’t doubt that many of you have strong reasons for your convictions and that you feel confident you can “prove” your point.

But what does that accomplish? Wouldn’t it be better to ask someone who differs with you why they believe their perspective is right? Is it so dangerous to hear someone out even when you’re convinced that they’re wrong?

Why does one group trust the police and the other does not?

Why does one group say, “Justice was done” and the other say, “This was a travesty of justice”?

Why are our perspectives so radically different?

It does no good to accuse one side of ignorance or the other side of bigotry, but it does lots of good when you say to someone, “I have a totally different perspective on this than you do, but I’d love to understand your point of view.”

This must happen on an individual level, as friends and co-workers sit and talk, and it must happen on a corporate level, as we set up conferences and town hall meetings where we can sit face to face and interact.

And that will mean wading through a minefield of potential volatility and misunderstanding, but as I have seen in more than 6 ½ years of daily talk radio, it’s a risk worth taking.

5) The Church must lead the way.

With all respect to secular government and politics and media and society, I believe that followers of Jesus must lead the way in bringing reconciliation and redemption. This is the very essence of the gospel.

We must be the peacemakers.

We must be the bridge builders.

We must be the one who transcend ethnicity and color, building instead on our unity in the Lord, where there is neither male nor female and neither black nor white.

It is an arduous task, but it must be done.

And so rather than inflaming and inciting, we must honor, respect, listen, learn, speak, and act, working together for justice for all.