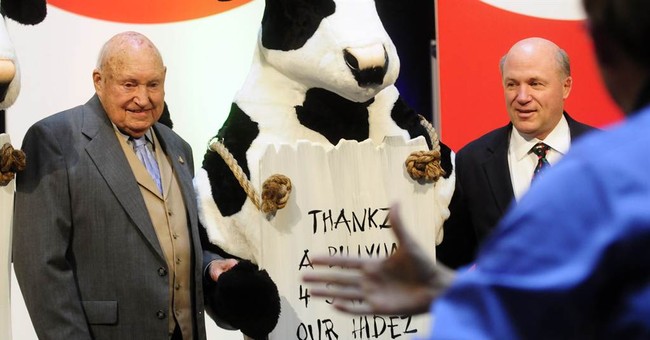 In an unabashed display of unbridled bigotry, NY City Councilman Daniel Dromm has told multiplied hundreds of thousands of New Yorkers that they are not welcome in his city. That he made this announcement while denouncing bigotry makes his statement ironic to the point of ridiculous.

As reported by Catherine Briggs on Lifesite News, “In response to Chick-fil-A’s proposed plans to expand their business and set up restaurants in several locations, including New York City, Councilman Daniel Dromm told the Huffington Post that the fast-food chain would not be welcome in the most populous city in the country.”

“We don’t need bigots coming to New York City,” Dromm told HuffPost. “They are not welcome here unless they can embrace all of New York’s diverse community, including the LGBT community.”

In keeping with this rhetoric, the Huffington Post headline read, “Chick-Fil-A Hopes NYC Will Forget That Whole Hating-Gays Thing.”

Have these journalists and politicians completely lost touch with reality?

To set the record straight (as if the facts actually mattered to Councilman Dromm or the Huffington Post), Chick-Fil-A has never been found guilty of discrimination against an employer or customer based on sexual orientation. In that sense, in terms of providing quality service to all and being an equal opportunity employer, they have embraced everyone.

Chick-Fil-A is also famous for their customer care, often ranking first in take-out service rankings and commonly leading the way in terms of customer friendliness. Those taking your orders will often say that it has been their pleasure to serve you, while store managers have been known to go around to each table to see if drink refills or other items were needed – and they do so with a smile. (That would be something to behold in New York City, come to think of it.)

But all of that is irrelevant to Mr. Dromm, since Chick-Fil-A’s Dan Cathy committed the cardinal sin of previously expressing his viewpoint that marriage is the union of a man and a woman (what a dastardly thought!), thereby putting him in the class of intolerant bigot and gay hater. The nerve of that man!

Of course, Cathy has made clear that while his views remain the same, putting him in very good company across the country and around the world, he is now leaving Chick-Fil-A out of the culture wars, simply focusing on serving good chicken meals to his customers.

For Dromm, however, that is not enough. “We don’t need bigoted people even keeping their opinions to themselves. They need to wake up and see reality.”

What? This is actually a quote from an elected official?

Let’s deconstruct this for a moment.

First, Dromm is now demanding that for someone to do business in New York City – or, perhaps, even to live there – they cannot believe that marriage is what it has always been, namely the union of a man and a woman, even if they keep their opinions to themselves. Maybe he can set up some reeducation camps in an abandoned prison where these misfits can be sent until they are rehabilitated?

Second, he is effectively telling hundreds of thousands (or even several million) New York City-based conservative Christians (many of whom are African American), Orthodox Jews, and practicing Muslims that they are not welcome to do business (and live?) in his city, since all of them hold to the biblical and historic definition of marriage, the one still recognized by 31 states despite a constant onslaught of gay activist pressure.

Third, following Dromm’s draconian logic, since Chick-Fil-A is closed on Sunday, that would send a wrong signal to non-Christian New Yorkers, suggesting that their faith is not as valid as Dan Cathy’s faith. In fact, you could extend this nonsense in every direction, meaning that Orthodox Jewish businesses that close on the Sabbath are sending a negative, non-embracing message to non-religious Jews and people of other faiths. And on and on it goes.

It is Councilman Dromm who needs to wake up to reality, recognizing that the bigotry is coming from him, not Chick-Fil-A, that his words mark the height of discrimination and intolerance, that there are many strong reasons to stand against redefining marriage that have nothing to do with bigotry, and he should welcome a fine company like Chick-Fil-A to New York City with open arms.

Of course, had Dan Cathy followed in the footsteps of many other major business leaders, sinking large amounts of money into gay activist causes and even speaking against Christian values, he would have been welcomed by Mr. Dromm as a paragon of tolerance.

Such is the twisted society we live in today, and the people of New York need to let Councilman Dromm know exactly how they feel, but mixing their passion with civility and respect, in stark contrast with Mr. Dromm’s bigoted sentiments.

Media And Sanders Adviser Compare D-Day Heroes to Antifa, the Backlash is Swift
Redstate
I did not kill George Floyd
Hotair