Why We Should Stay Out of Syria 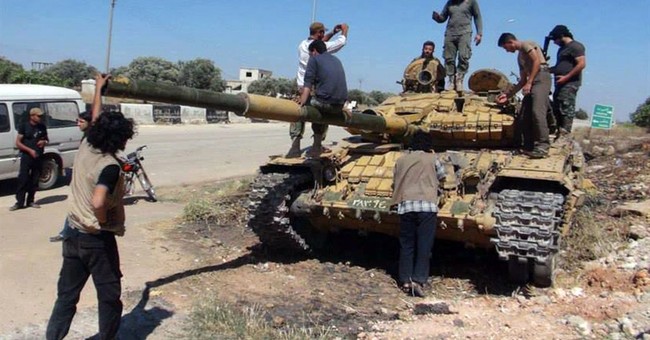 It is one thing to provide humanitarian aid to the suffering Syrian people (although that is hardly an easy task to accomplish, as praiseworthy as it may be), but it is a grave mistake for America to attempt to get involved in the military conflict. There is hardly a “lesser of two evils” to side with there.

On the one hand, we know that President Bashar Assad has continued in his father’s tyrannous and murderous footsteps, with the blood of tens of thousands of his people already on his head. In fact, some of the bloodshed has taken place in the very same locations, with Hafez Assad being responsible for the 1982 massacre in Hama that took the lives of between 10,000-40,000 Syrians, while in 2012, Bashar Assad’s troops slaughtered scores of insurgents in the same city.

And there is no doubt that the reports of wholesale torture, imprisonment, rape, and murder of men, women, and children by Assad’s forces are largely accurate. (Can you imagine what the world outrage would be if the government of Israel engaged in atrocities 1/100th this severe?)

It is understandable, then, that we feel the need to take action against the Assad regime.

But what would happen if Assad was toppled? And if we stand against Assad, who are we standing with? (Sarah Palin’s recent quip at the Faith and Freedom Conference, “Let Allah sort it out” – meaning, until we have strong leadership in the White House, we should keep our hands out of Syria – is actually somewhat apropos.)

We have witnessed the slaughter and/or exodus of hundreds of thousands of Iraqi Christians since the fall of Saddam Hussein, an eventuality that the Bush administration apparently gave little thought to, while the persecution of Coptic Christians in Egypt under the Muslim Brotherhood continues to rise. (The mass exodus of Christians from the Muslim Middle East is well-documented, even if underreported.)

In the same way, there is good evidence that the fall of Assad would open the door to the massacre of the Christian population of Syria, with reports of 300,000 Christians already fleeing the country. Does America want to be party to this? Have we learned our lessons from Iraq? (This is not to say that the war was wrong but rather that we failed to think through the implications of our actions.) Have we learned our lessons from Egypt, where the “Arab Spring” quickly became a “Sharia Fall”?

We helped fund and arm the Mujahedeen in their battle for liberation against Russia in Afghanistan, the end result being that one fundamentalist Islamic movement – meaning, the Mujahedeen, militant Muslim freedom fighters – came into power, only to be displaced by an even more militant Islamic movement (the Taliban). In the eyes of fundamentalist Islam, America may be a useful ally, but ultimately, America is the enemy. What lessons have we learned from this?

There are even some who claim that “the Taliban — and al-Qaeda — were [created] by the CIA in league with Pakistani and Saudi Arabian intelligence.” If true, should we learn something from this?

In recent days, there have been reports of atrocities committed by the Syrian “rebels” in the name of Islam, including the execution of a 14-year-old boy for insulting Mohammed, while YouTube videos show government troops being shot in the head by the “rebels” as others chant “Allahu Akbar”! (I put “rebels” in quotes because calling them “rebels” only tells part of the story.)

On Sunday, June 16th, Russian President Vladimir Putin warned the West “against arming Syrian rebels ‘who kill their enemies and eat their organs,’ referencing a widely circulated video that purports to show a rebel fighter eating the heart of a dead soldier,” while at the same time, the Assad government is being aided by the Lebanese-based terrorist organization Hezbollah, and Iran has promised to send several thousand troops to Assad’s aid.

And that is only the tip of the iceberg, as a June 3rd AP report notes that, “The Syrian conflict, now in its third year, has taken on dark sectarian overtones. Predominantly Sunni rebels backed by Sunni states Saudi Arabia, Qatar and Turkey are fighting against a regime that relies on support from Alawites and Shiites at home, and is aided by Iran and Hezbollah. The Syria conflict is also part of a wider battle between Saudi Arabia and Iran for regional influence. Sunni fighters from Iraq and Lebanon have crossed into Syria to help those fighting Assad, while Shiites from Iraq have joined the battle on the regime’s side.”

Then, of course, there are the implications for the safety of Israel in the case of either an Assad victory or an Assad defeat, the former assuring Syria’s ongoing cooperation with Hezbollah and Iran, the latter assuring the rise of a more militant Islamic regime to Israel’s north, with dangerous implications for Lebanon as well.

In light of these realities, and in light of our government’s failure to exercise more foresight in dealing with the Muslim world, we do best at this point to avoid military involvement in Syria while doing our best to provide humanitarian aid to the suffering country and looking for ways to help end the bloodshed. But short term or long, we should not delude ourselves: This is a hornet’s nest.