When You Think Your Mother is a Vampire 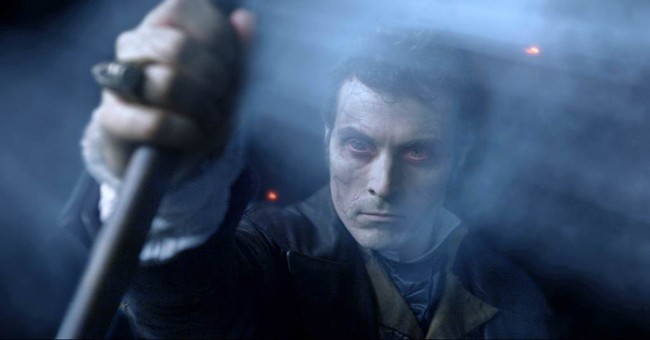 He may only be 11, but Alexi Caples is already starting to think that his mom might be a vampire. After all, not every home has coffins for decorations, and Alexi already posed in a picture with his mom and dad (now divorced), holding a grinning skull with satanic horns on his lap. The fact is, while his mom might not be a true-blue vampire, she has been drinking blood (literally) for decades.

“She meets fellow vampire enthusiasts at a local occult and oddities store where she cuts them with a pagan-style knife before lapping up their blood.

“She believes it keeps her young and vigorous, just like the ageless bloodsuckers from movies such as Twilight.”

And she’s not alone. “The blood-thirsty care worker claims there is a huge sub-culture of blood drinkers across the world.”

Yes, it appears the vampire craze is not limited to bestselling books and blockbuster movies. People actually take this stuff seriously.

Less than two years ago, I wrote an article entitled “The Girl Who Thought She Was a Werewolf Vampire,” part of which focused on an 18-year-old girl who was arrested for the grisly murder of a 16-year-old boy. She explained in her confession, “Since I was like, 12 . . . I know this is going to be crazy, but I believe that I’m a vampire. Part of a vampire and part of a werewolf.”

But this is nothing new. It is just becoming more popular, widespread and faddish. Back in 1996, the quiet college town of Murray, Kentucky was shocked when it was reported “that four area teen-agers [were] suspected of beating a Florida couple to death,” with prosecutors saying “the youths were involved in a strange role-playing game that went much too far - from the mutilation of animals to drinking each other's blood and eventually to murder,” all part of a vampire cult.

Today, if you want to look the part (without necessarily wanting to drink the blood of animals or humans), Vampires.com website gives instructions “for those of you who have decided you want real vampire fangs,” explaining that, “there are a variety of ways you can go about it.” If you can find a willing dentist, “you can have your front teeth shortened and your canines filed,” with the wise caveat, “Keep in mind, this will take a while, and you’ll have fangs the rest of your life.” The “second most permanent option, is to get crowns on your canines, -- also known as ‘caps’.”

As absurd as this all sounds, it would be foolish to think that we could have a society obsessed with vampires and zombies and blood-gushing, torture-glorifying movies and video games without many people acting out what they see and hear. And some people, like Julia Caples, claim to have been at this for decades.

She and her former husband Donald actually “got married in a vampire-themed wedding in October 2000 and even drank from each other to celebrate.” (This does not mean they held glasses of champagne to one another’s lips; it means they drank blood from one another’s necks!)

But again, they were not alone in their ghoulish behavior: “The pair became part of a sub-culture of vamp fans who visited New York nightclubs and drink from each other.”

Parenthood, however, changed things, and “when the pair had son Alexi, Donald vowed never to drink again,” explaining, “I gave up, so Julia didn’t have to. We agreed that one of us would need to stop and focus on parenting full time.”

Not to worry, though. Donald notes that “Julia still likes to drink, but she’s also an amazing mother, and her children come first. She’d never let it stop her mothering her kids.”

And safety, of course, always comes first, as Julia explains that while she gets contacted by potential “donors” online, she has to “meet them in person first.” She adds, “And they have to get blood tests to make sure that they’re not carrying any blood-borne diseases like AIDS or HIV.”

Surely, if one is to drink blood, it cannot be contaminated!

As for the phenomenon, hematologist Steven Gruenstein, from Mount Sinai Hospital in New York noted that, “There has been a resurgence of cult drinking blood vampirism in this country and throughout the world, possibly down to all these TV shows and movies that have become so popular.” And let’s not forget the spate of horrific, zombie-like attacks last year. Whether drug-induced or not, they seemed to have a lot in common.

So, vampirism is in (after all, you can be super cool and live forever) and zombies rule (there’s even a Pro Zombie Soccer video game), and while this is hardly a cultural epidemic in our country, it is another sign of just how sick our society has become, with Hollywood helping to lead the way, bloody fangs and walking dead and all.

America is ripe for a spiritual and moral transfusion – I mean, transformation.