Michael Barone
|
Posted: Aug 30, 2019 12:01 AM
Share   Tweet
The opinions expressed by columnists are their own and do not necessarily represent the views of Townhall.com. 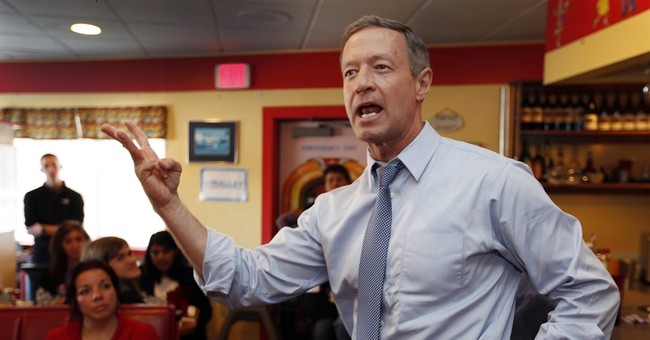 Anyone heard anything about Martin O'Malley lately? Four years ago, he was busy out in Iowa running for president. After two successful terms as mayor of Baltimore (homicides fell during his years) and as governor of Maryland, he seemed like a plausible candidate. Strumming his guitar and singing Irish songs, he seemed more likable than either Hillary Clinton or Bernie Sanders.

Yet as a candidate, like most of the Democratic candidates running this year, he got just about zero support. In the Iowa caucuses, he won just 0.54 percent of "state convention delegate equivalents" (the Iowa Democrats' metric); it appears that of the 171,000 Democrats who showed up on caucus night, only about 1,000 voted for him. There just wasn't much demand for a white male non-socialist that year.

At least not one who bridled at identity politics. While other Democratic candidates and officeholders heaped praise on the Black Lives Matter movement, O'Malley was shouted down and forced to apologize when he said, "All lives matter." A statement that most Americans would find anodyne is regarded as heresy in Democratic politics.

What's interesting is that O'Malley was the kind of politician who was most successful in the first decades of the current primary-dominated, Iowa-and-New-Hampshire-vote-first electoral process: a white male officeholder with a generally liberal record but with affinity for traditional middle-class culture. Not every nominee from 1972 to 2004 precisely fit that mold, but it's a fair descriptor of most.

More important, after Democratic nominees won just 43 and 38 percent of the popular vote in 1968 and 1972, respectively, and as Democrats lost five of six presidential elections up through 1988, even liberal Democratic primary voters were wary of an outspoken liberal's chances. It was assumed, probably correctly, that a woman or a black could not be elected.

The Democratic mindset is different today. Democratic voters know that their party's nominees have won pluralities of the popular vote in six of seven elections since 1992. While many may mutter imprecations about abolishing the Electoral College, as if that were easier than adjusting party stances to appeal more in heartland states, most take it for granted that if a weirdo like Donald Trump can get elected president, so can just about anybody the Democratic Party nominates.

Yet just about every Democratic primary poll this year -- the recent Monmouth survey appears to be an outlier -- shows Joe Biden leading the pack, often with a statistically significant lead. He's the kind of candidate who prevailed in the 1972-2004 period, and his own 1988 candidacy was doing well until it was ended by gaffes and a health problem. But by 2008, he was only running at O'Malley levels, with just 0.9 percent of state convention delegate equivalents in Iowa.

Biden runs best with older Democrats and those classing themselves as moderate, and there's been speculation that when the candidates polling at O'Malley levels pull out, as four already have, their presumably younger and more liberal supporters will go to a Biden rival.

But there aren't that many of them. If you add the average recent poll numbers of the 15 candidates under 2.0 percent, you get just 7.2 percent. That's fewer than the 11.4 percent listed as undecided, and many more seem only loosely attached to their current choice.

On the other hand, if the Biden candidacy implodes -- possible if he underperforms expectations in Iowa and New Hampshire -- then where do his voters go? Presumably not to his closest competitors in current polling, Bernie Sanders and Elizabeth Warren, whose platforms are headed in a socialist direction Democrats in the old days would have shunned.

Perhaps they would head to incumbent senators like Cory Booker, Michael Bennet or Amy Klobuchar, all currently running at Martin O'Malley levels. Or perhaps elsewhere.

I have long thought that the presidential nomination process is the weakest part of our political system, and it seems to be getting weaker as it attracts more and more candidates -- more than a dozen Republicans last time, two dozen Democrats this time.