Trump's Rivals Must Make the Case for Themselves

Michael Barone
|
Posted: Feb 26, 2016 12:01 AM
Share   Tweet
The opinions expressed by columnists are their own and do not necessarily represent the views of Townhall.com. 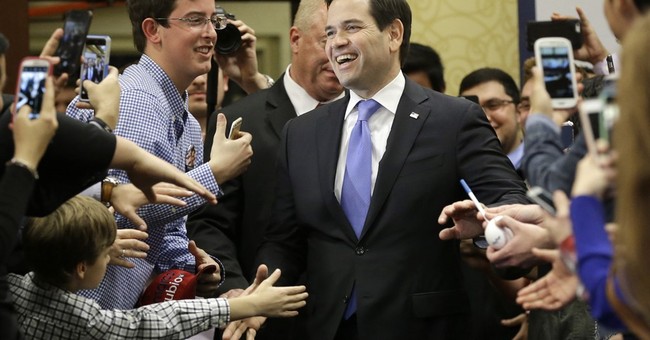 Trending
Does Donald Trump's big win in the Nevada caucuses mean he's the inevitable Republican nominee? He has made himself the favorite and could sew up the nomination with the first winner-take-all primaries March 15. But it's not inevitable that he will become the nominee. The question is how others can prevent it.

Trump won 46 percent in Nevada; Marco Rubio won 24 percent, and Ted Cruz won 21 percent. That's in line with polling, which showed Nevada to be one of the best Trump states.

In February polls in the nine states with March 1 primaries he gets less, between 23 and 34 percent. And his final percentages have tended to be a bit under his poll numbers. So he could lose even in three-candidate contests.

But each of the three challengers faces serious challenges, including a home-state primary in the next three weeks: Ted Cruz in Texas on March 1; Marco Rubio in Florida on March 15 and John Kasich in Ohio, also on March 15.

Could we see a Cruz revival? Ted Cruz lost very conservative voters to Trump in Nevada and evangelicals there and in South Carolina. He ran just 1 point ahead of Rubio among evangelicals in Nevada and 5 points in South Carolina. These are groups he hoped would help him win, as in Iowa. But he won't win March 1 Super Tuesday Southern primaries without improving on those numbers.

His best opportunity is in his home state, Texas. But he's won only one election there, in 2012, and since then has focused on national politicking rather than getting better acquainted with his 27 million constituents. February polling has him just a few points over Trump and, in one poll, leading Rubio by only 4 percent. He looks likely to fall short of the 50 percent that would give him all of Texas's 155 delegates.

Absent a big victory in Texas, Cruz's prospects look grim. His percentages so far among non-evangelicals -- a larger share of primary voters after March 1 -- are 19, 8, 13 and 18. Enough for third place finishes, not more.

What about a Rubio surge? In Iowa, South Carolina and Nevada, Marco Rubio has demonstrated an affirmative appeal to high-income and college-educated voters -- the groups that gave Mitt Romney the nomination in 2012. That makes him competitive in Virginia and Georgia March 1.

But he needs most of all to win Florida's winner-take-all primary, with 99 delegates, March 15. Like Cruz, he's won just one election there, in 2010, and has concentrated on national issues since, not in close touch with his 20 million constituents.

Rubio can certainly improve on his weak showings in Florida polls, none taken after Jan. 21, which show 18 percent for candidates who have left the race, including ex-Gov. Jeb Bush. Affluent, high-education voters powered Mitt Romney to a 46 percent win in the high-turnout 2012 primary.

But Rubio seems determined not to rely, as Romney did, on negative campaigning against his chief opponent. "I don't have any voters begging me to attack anyone," he said the morning after Nevada. "I'm not in this race to attack any Republican."

Instead, he's likely to stress electability and the national polls, which show him running better than Trump or Cruz against Hillary Clinton or Bernie Sanders. One bit of good news for him out of Nevada: 25 percent of voters there picked "can win in November" as the reason for their vote, about double the percentage in New Hampshire and South Carolina. Look for him to talk a lot about electability.

Is there a Kasich opening? In New Hampshire John Kasich found a constituency big enough for a 16 percent second place. Can he find another? Not in Massachusetts or Vermont March 1, the polls of the few registered Republicans suggest. Not in Michigan March 8 unless he leaps ahead of his poll numbers there.

And maybe not in his home state of Ohio, with its winner-take-all primary for 66 delegates March 15. The one 2016 poll there shows him trailing Trump by 5 points. An MSNBC poll shows about half of Kasich voters' second choices were Rubio and the now-exited Bush. Does Kasich keep on plugging away for three weeks to get home? Or does he quit and (probably) help Rubio?

Will super PACs come to the rescue? Big donors, whose $100 million super PAC didn't help Jeb Bush, don't seem interested in deconstructing Donald Trump. Attacking him for political incorrectness and violations of conservative orthodoxy just seems to bolster his appeal. That leaves his remaining rivals to make the case for themselves.