Michael Barone
|
Posted: Feb 02, 2016 12:01 AM
Share   Tweet
The opinions expressed by columnists are their own and do not necessarily represent the views of Townhall.com. 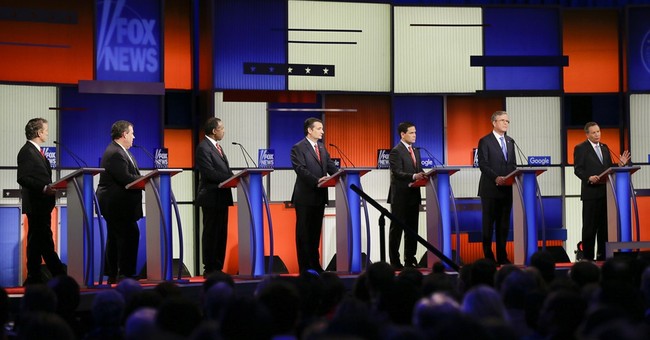 Trending
Donald Trump was absent from Fox News' Republican debate Thursday night, presiding at his own event seven minutes' drive away featuring cameo appearances by the two previous Iowa Republican caucus winners exiled now to the undercard debate, Mike Huckabee and Rick Santorum. But the issue Trump raised to high-decibel level at his announcement last June was front and center at the main event: immigration.

It was raised midway through the debate by the moderator Trump cited as the reason for his non-participation, Megyn Kelly. She ran videotape montages of previous comments on the issue by Marco Rubio and Ted Cruz, and asked them to explain the discrepancies between what they said then and their positions now. She could have played a similar montage for Trump if he had shown up.

Marco Rubio had the toughest task, to explain why he co-sponsored the 2013 Gang of Eight bill with a path for citizenship for illegal aliens. Rubio said the bill did not provide the "blanket amnesty" he campaigned against in 2010 and which he said was part of the 2007 bill that failed in the Democratic-majority Senate.

With characteristic deftness Rubio segued into his current position: complete the southern border fence, mandatory E-Verify and visa tracking and no legalization or citizenship for illegals until "we can prove to the people of this country that illegal immigration is under control."

Kelly gave Jeb Bush a chance to point out that Rubio had changed his position --"cut and run" -- from the Gang of Eight bill, which he said he supported at Rubio's request.

Next came Ted Cruz's turn, with Kelly's video showing Cruz arguing for his amendment to Gang of Eight that would provide legalization but not citizenship for illegals. Cruz argued then that this would make the bill more passable; he argues now that it was intended as a poison pill, to break up the bipartisan coalition in support.

In reply Cruz called for more border guards, ending sanctuary cities and welfare for illegals. He pointed out that this amendment was supported by leading Gang of Eight opponent Sen. Jeff Sessions and western Iowa Congressman Steve King.

Kelly then called on Rand Paul, now back in a prime-time debate, who said that Cruz wanted to pass a bill with legalization. "He can't have it both ways," Paul said, and argued that Cruz had "an authenticity problem" by suggesting that "everybody's for amnesty except Ted Cruz."

It's undeniable that both Rubio and Cruz have changed their positions since 2013. For immigration restrictionists, such as best-selling author Ann Coulter and maverick Democratic blogger Mickey Kaus, that's disqualifying. Once past the election, they argue, these guys will flip back and with the cooperation of House Speaker Paul Ryan will shove through a path to legalization that will incentivize further illegal immigration.

Presumably, they believe that Donald Trump, who also supported forms of legalization, wouldn't because he has become so identified with the issue.

But the effective reality, as National Review's Ramesh Ponnuru has argued, is that immigration has become a Republican litmus test issue. Rubio's and Cruz's deft maneuvering off their previous positions proves that. And Rubio is persuasive in arguing that a bill with legalization can't be passed until the American people -- i.e., Republican voters -- are convinced that enforcement has been made effective.

My sense is that a President Rubio or President Cruz would be as bound by their current positions as a President Trump. The demand for legalization has diminished -- polls show Hispanics not much concerned -- and Democrats will balk at legalization and insist on citizenship (for what they believe will be many new Democratic voters).

Paul Ryan is not likely to spend the huge amount of political capital required to pass a bill supported mainly by Democrats and opposed by a large majority of House Republicans.

Donald Trump's candidacy, however it turns out, has changed the immigration calculus for Republican politicians. Some Republicans fear that Hispanics would make Arizona, Texas and Florida as solidly Democratic as California, but these fears are unfounded.

Arizona and Texas remain safely Republican and Florida still securely marginal, and each is getting more newcomers from other states than from immigration. And California would be safely Democratic if not a single Hispanic voted.

Meanwhile, the threat of terrorism strengthens the argument for effective border and internal enforcement, which if possible would tend to reduce the illegal population. The opening for "comprehensive" immigration legislation seems to have closed.