Can Cocksure Obama Change Course -- and Keep His Nerve? 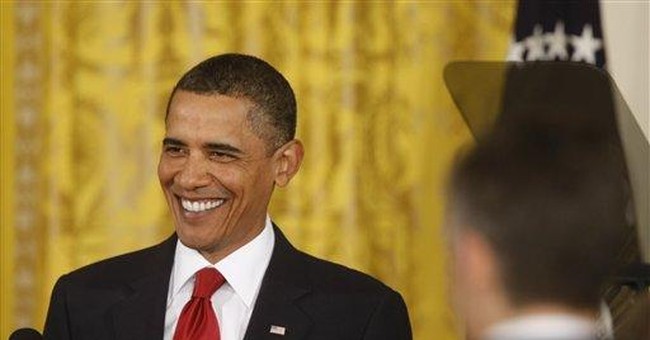 A year ago, I was privileged to be one of several guests at a dinner with President-elect Barack Obama. One thing that struck me and others, aside from his courtesy and fluency, was his air of self-confidence. The man who had risen in just four years from state senator to president of the United States seemed sure he could master the job.

I wonder if he is as sure now. It seems to me that two assumptions that Obama carried into the White House -- assumptions that were shared by many who hadn't voted for him -- have proved to be unfounded.

The first is that economic distress would lead more Americans to favor big government policies. The second is that Obama's personal characteristics and his repudiation of many of his predecessor's policies would change the minds of America's critics and enemies.

Any doubts that these assumptions were mistaken were dispelled at Christmastime. On Christmas Eve, the Senate passed a massive health care bill that according to every public opinion poll is opposed by most Americans. And on Christmas Day, Nigerian terrorist Umar Farouk Abdulmutallab came close to destroying an airliner as it was preparing to land in Detroit.

The unpopularity of the stimulus package, cap-and-trade legislation and the various health care bills probably surprised the congressional Democratic leaders who put them together and the president who, with surprising passivity, indicated he would sign them. After all, weren't these ways to spread the wealth to ordinary people, as Obama put it to Joe the Plumber?

But through most of our history, Americans have preferred policies that enable and help them to amass wealth rather than those that purport to transfer someone else's wealth to them. The biggest outpouring of political sentiment this year came from those who thronged to "tea parties" and denounced increases in the national debt as stirringly as did the first Democratic president, Andrew Jackson, who actually paid it all off.

On foreign policy, Obama imagined that confessing past American sins, announcing the closing of Guantanamo and abandoning enhanced interrogation techniques would make Islamist terrorists think better of the United States. He thought he could induce the leaders of enemy nations to change their ways by referring respectfully to regimes like Iran's and downplaying all talk of human rights abuses.

It turns out that just as the financial crisis and recession did not much change Americans' fundamental attitudes on the balance between government and markets, so emollient talk and confessions of past American sins did not much change the behavior of those who consider America a sworn enemy. The mullahs still want their nuclear bomb.

American officials could stop talking about a "war on terror" and speak instead of "man-caused disasters." But that did not disarm the Islamist terrorist who shot up the recruiting station in Little Rock, Ark., or the Muslim psychiatrist who opened fire at Fort Hood or the pampered Nigerian who tried to bring down Northwest flight 253 over Detroit.

Obama did manage to abandon his statement that the Detroit bomber was an "isolated extremist" and admit that he was in touch with al-Qaida terrorists in Yemen. Yet his administration quickly sent him into the civilian justice system, where he predictably clammed up, and until a reversal yesterday, proclaimed that it would keep sending Guantanamo detainees to Yemen.

We have all experienced the cognitive dissonance that comes when it turns out that the world doesn't work the way we assumed it would. It's hard to give up your assumptions and easier often to believe that unexpected events and results were an aberration from norm that would quickly snap back to what we expected.

Midcourse corrections in these circumstances are often awkward and difficult to execute, the more so when all eyes are on you and any change in direction is the subject of universal comment and adverse criticism.

Getting elected president of the United States must be an enormously confidence-building experience: So many people wanted the job, and you got it. Being president can be more chastening when events don't turn out as you anticipated.

The great presidents -- Abraham Lincoln, Franklin Roosevelt -- faced events no one expected and in response changed policies and priorities without ever, so far as we know, losing their nerve. Lesser presidents, including Bill Clinton and George W. Bush, did so as well. Will Barack Obama?