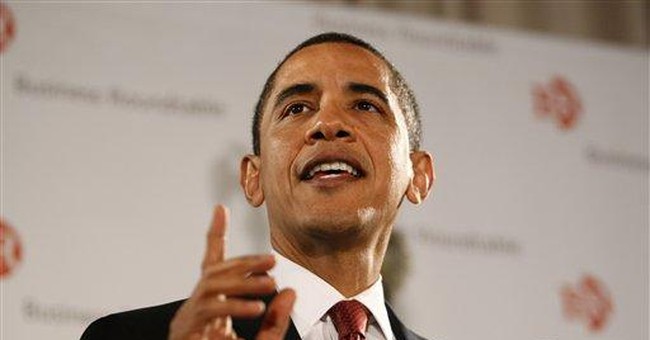 We've been hearing a lot of criticism of Barack Obama in recent days from pro-Obama corners -- from celebrity investor Warren Buffett, from moderate conservative columnist David Brooks, from one of the Democratic Party's deepest thinkers, William Galston -- all along the same lines. Put aside your plans, announced in your budget, for national health insurance, for a cap-and-trade system to reduce greenhouse gases, for effectively abolishing the secret ballot in unionization elections. And, they might have added, for higher taxes on, and a reduction in, their charitable deductions to channel money away from charities and nonprofits and toward the government. Pay attention to the first thing on your platter and the nation's, Buffett and Brooks and Galston say: the financial crisis.

The answer Obama has given, in advance, is that we can only solve our economic problems by advancing these other programs. But the real answer came from White House Chief of Staff Rahm Emanuel in November: "Never let a serious crisis go to waste."

None of the issues addressed in the Obama budget was in any way a cause of the financial crisis. We did not have a housing bubble collapse because we don't have a national health insurance program. We don't have toxic waste clogging the balance sheets of the banks and other financial institutions because of carbon emissions. The Bush tax cuts were not a proximate cause of the giant public debt being run up under the Toxic Assets Relief Program or the 2009 stimulus package.

Moreover, as Galston points out, the New Deal doesn't provide a precedent for the Obama budget. In his first months in office, Franklin Roosevelt concentrated on repairing a financial system that was in much worse shape than ours is today, with most banks closed. Roosevelt got most of them open and running again. It was a couple of years later that the programs we remember the New Deal for were passed -- Social Security, the Wagner labor act, higher taxes on high earners. (Well, Roosevelt did sneak in repeal of Prohibition.) Even Roosevelt's first expansion of welfare rolls, at the end of 1933, was abruptly cancelled when the snows melted in spring 1934.

There's another reason to put aside the Obama budget plans. We're in a severe recession, and each of his major proposals is going to stunt the growth of the private sector economy. But most of them -- national health insurance, forced unionization, higher taxes on high earners -- have the offsetting advantage, from Obama's point of view. They would "spread the wealth around," as he told Joe the Plumber, even if there is less wealth to spread around.

The same cannot be said of cap-and-trade. It would take some $600 billion out of the private sector economy in order to avoid an environmental crisis that is supposed to arrive in -- oh, some time around 2055. In other words, we are not dealing with here-and-now facts, as we are in the financial crisis, but with predictions based on theories ... theories that have not done a very good job of predicting the climate over the last decade (they said it would get warmer; it's gotten a little colder). Theories that do not retrospectively explain climactic variations in the past.

We are dealing here with something more like religion and less like science. We are told that all argument about global warming must end. We must have faith! But it is religion that asks us to have faith; science presents us with theories that can be tested by observation and produce replicable results -- and the results for 2055 aren't in.

It is religion that asks for repentance and offers rituals for atonement; science suggests ways we can adapt and cope with change. It makes sense to understand how the physical environment may be damaged by changes in climate and to prepare for repairs that may be needed, and we are already doing that. It makes no sense to cripple a struggling economy in order to prevent damage that may or may not occur many years from now.

Voters seem to understand that. Gallup reports that 60 percent of Americans say global warming will not pose a serious threat to them or their way of life in their lifetimes. Or as Stuart Taylor, another moderate critic of the Obama budget, puts it, when your house is on fire, you don't water the lawn.