Ghosts of 1976 in Today's Campaign 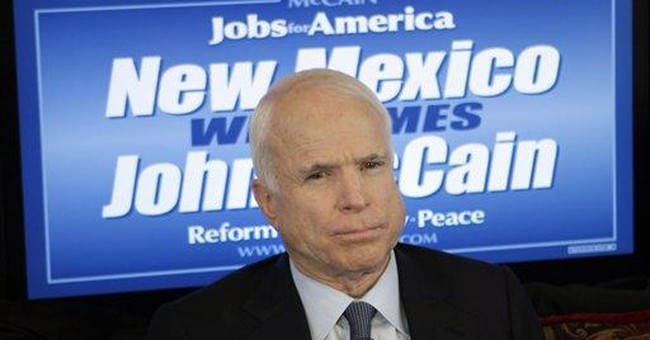 Looking back over the last 40 years, the presidential campaign that most closely resembles this year's is the contest between Gerald Ford and Jimmy Carter in 1976. The Republicans were the incumbent presidential party that year, as they are now, but the Democrats had a big advantage in party identification -- on the order of 49 percent to 26 percent then, far more than today.

The Republican president who had been elected and re-elected in the last two campaigns, Richard Nixon, had dismal favorability ratings, far lower than George W. Bush's. His name could scarcely be mentioned at the Republican National Convention. The Democratic nominee was a little-known outsider, with an appeal that was based on the idea that he could transcend the nation's racial divisions. Jimmy Carter, a governor from the Deep South, had placed a portrait of Martin Luther King Jr. in the state Capitol in Atlanta.

Ford's political situation then was far more parlous than McCain's today. An early summer Gallup poll showed him trailing Carter by 62 percent to 29 percent. He had barely limped through the primary contests against Ronald Reagan, who continued his campaign up through the mid-August national convention. His political ads had been disastrous, and on Aug. 1 he did not have a general election media team in place.

How this came about is an interesting story, and one of obvious relevance to the McCain campaign this year. Much of it is told in a book two copies of which are currently available new and used on amazon.com, "We Almost Made It," by Malcolm MacDougall -- a professional advertising man, still active, who had played no significant role in presidential campaigns before 1976 and has not done so since.

MacDougall was brought into the Ford campaign on Aug. 7 (!) by Douglas Bailey and the late John Deardourff, whose political advertising firm then worked mostly for liberal Republicans. Bailey Deardourff produced the national advertising, while MacDougall, headquartered in New York, prepared the dozens of ads aimed at specific states and regions, all under the supervision of a former under secretary of commerce from Texas named James A. Baker III. They almost pulled off one of the biggest upsets in the history of American politics.

How did they do it? First, by filling in the blanks on Gerald Ford. Voters knew that he had pardoned Richard Nixon and that he tended to bump his head when exiting airplanes. The Ford ad team told them more -- how he had grown up in Middle America, played football for the University of Michigan (the name of the team was omitted in ads aired in Ohio) and served in the military in World War II. There's an assumption this year that voters know John McCain pretty well. But my sense is that there is still a lot of filling in the blanks that the McCain campaign can do.

Second, they filled in the blanks on Jimmy Carter. Most voters wanted to support a Democrat, and one who had smoothed over the nation's racial divisions -- as they do today. The press up through early summer was giving him mostly adulatory coverage. But voters didn't know much about Carter. He made, as most candidates do -- and as Obama seems to be doing now -- some mistakes along the way.

The Ford ad team honed in on his record, with man-on-the-street ads, some filmed on the streets of Atlanta. It was risky, going against the grain of public opinion. But the Ford campaign persisted, and it worked. The McCain campaign needs to take the same risk and to persist in the face of media disapproval.

Finally, the Ford campaign altered the mood of the nation. Voters then, as now, thought the nation was off on the wrong track. The Ford campaign, with a catchy song, "I'm Feeling Good About America," and upbeat ads starting off with shots of Air Force One, argued that their candidate was leading the nation around the corner, making Americans feel proud again. The McCain campaign needs to do something similar, to argue that their candidate can help the nation turn the corner and lead us into better times.

Exactly how they can do this I'm not sure. They might give Doug Bailey, Mal MacDougall or Jim Baker a call.