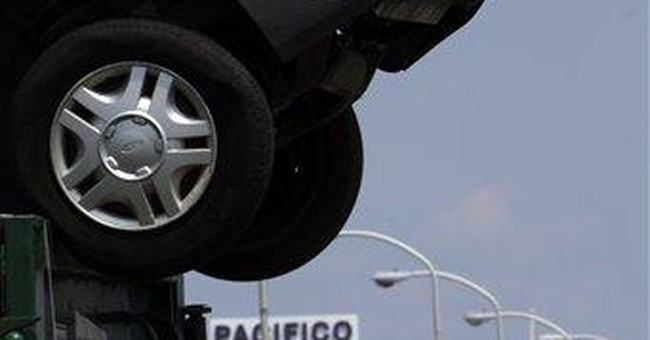 The Cash for Clunkers fiasco is just the latest example—in an interminable list—of government’s “unintended consequences” and their destructive impact. To incentivize behavior that government deems good or constructive, programs such as Cash for Clunkers are established. The $4,500 voucher given to new car purchasers is meant to entice them into selling their old gas hogs for more fuel efficient vehicles. Thus, government can achieve its latest goal of reducing America’s carbon foot print, and, as a byproduct, reduce our consumption of oil.

There’s nothing wrong with government incentivizing things that are truly beneficial to society. But the proper way to encourage citizens to engage in such behavior is to offer tax credits or deductions, not government subsidies—which are really expenditures of fellow taxpayers’ money. The $4,500 voucher given to new car buyers wasn’t created out of thin air; it is money taken out of the pockets of those who will either hold on to their clunkers (even with $4,500 they can’t afford a new car), or those who have already purchased their new, more fuel efficient car.

Tax credits and deductions have proven a very effective tool in encouraging charitable giving in America. Since the role of government is (or used to be) limited to only those things it is assigned by the Constitution, citizens, churches and private charities tend to those needs in society that are outside the bounds of government authority. The latest government fiasco of giving taxpayer money to new car buyers is creating another unintended consequence: hurting the charities that rely on old car donations to fund their work.

Last week Mission Solano, a homeless charity based in Fairfield, California, reported that it’s concerned the Cash for Clunkers program could hurt their organization. For years taxpayers have donated their old cars to charities and received a tax deduction. Charities such as Mission Solano then sell the donated cars on charitable car lots that generate income to fund their work. It’s a win-win for both the taxpayer and the charities—and those aided by the charities.

Mission Solano’s executive director Ron Marlette described their concern: “It is too early to know how much we will be hurt by the Cash for Clunkers program, but we know we can’t compete with the government's checkbook. Our donations were already down due to the economy as people are driving their old cars longer or brokering a sale themselves. The Cash for Clunkers program could shut us down.”

In addition to selling cars to finance their assisting of the homeless or needy, organizations like Mission Solano also helps those who can’t afford to purchase new cars. Marlette explained, “We often sell our cars to individuals who cannot afford anything else. In some cases these are men and women who have been helped off the streets by the Mission. Now they have a job and need cheap wheels to get there. They can’t buy a new car. What are they supposed to do?”

In fact, the Cash for Clunkers program is wiping out an entire market of used cars purchasers. The teenage boy who mows lawns all summer long won’t be able to find an old clunker to purchase because the government intends to destroy or render useless the cars acquired through Cash for Clunkers. There are even reports that used car lot owners are finding it increasingly difficult to obtain older cars at auctions. With fewer older cars, prices are bid much higher, decreasing the profitability for used car lots and increasing prices for buyers.

While the Cash for Clunkers program may further the lofty government goal of saving the environment and stimulating a weak economy, its actions are hurting the vulnerable and poor. How sickeningly ironic that too often the government programs heralded as compassionate to the underprivileged end up hurting the very people they are designed to assist.