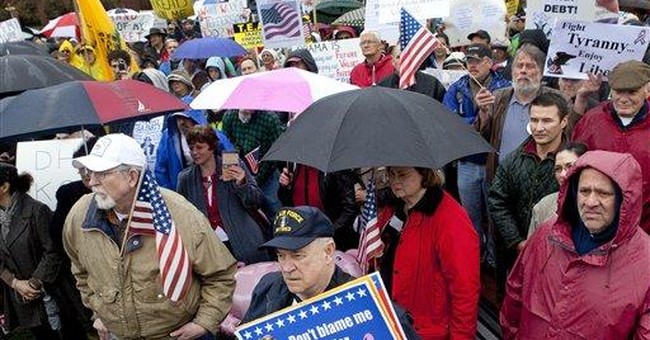 The nationwide Tea Party movement began as a grassroots effort to protest the exorbitant taxes government imposes on citizens. On April 15th, hundreds of thousands of taxpayers filled city parks and capitol lawns to voice their outrage at the burdensome taxes wasted by irresponsible politicians. It’s estimated that over 800 tea parties were held all across the nation, but Californians have more to lose (literally) than our fellow Americans.

In February, facing a $42 billion budget shortfall, California’s legislature and Governor Arnold Schwarzenegger “solved” the budget problem by passing the largest tax increase in California’s history. That was around the same time the tea party concept started to gain momentum across the country.

The February budget agreement included $12.8 billion in new taxes and $11.4 billion in borrowing. The Howard Jarvis Taxpayers Association estimates that each California family will be paying an additional $1,000 in new taxes this year to cover their legislature’s spending addiction. On top of the obscene stimulus spending that will saddle generations of Americans with unbridled debt, Californians will be laboring under one of the highest tax rates of any state.

With such a heavy tax burden, one can imagine the growing resentment and unrest amongst taxpayers. There were dozens of gathering in California, but the Sacramento Tea Party drew well over 5,000 citizens. Some long-time political activists observed that they hadn’t seen a crowd that large at the capitol in a very long time. Perhaps an indication of the rally’s anticipated size and impact, Fox News Channel host Neil Cavuto chose Sacramento as his broadcast location for the momentous day.

The event kicked off with a concert by Lloyd Marcus, an entertainer who penned the “American Tea Party Anthem.” Frequent Fox News Channel guest and local radio personality Mark Williams emceed most of the event, introducing a diverse group of speakers. Michael Reagan, whose father served as governor of California, rallied the crowd along with surprise guest actor John Ratzenberger. Although there were such celebrities in attendance, the event’s speakers reflected the true grassroots nature of the tea party movement: citizens encouraging and exhorting fellow citizens.

There were many political speeches delivered, but only two politicians actually appeared on stage at the rally: State Senator George Runner, who secured permits for the event, and Congressman Tom McClintock, a former gubernatorial candidate and famous foe of government waste.

As was probably true with most of the tea parties, the general spirit of the Sacramento Tea Party was a patriotic passion mixed with an urgent concern for our nation. Attendees’ extremely creative signs were witty and humorous, but they were also incisive in their criticism.

It’s noteworthy that despite the fact Homeland Security Secretary Janet Napolitano would probably classify most of the tea party participants as “extremists,” there was not one incident of violence or unrest. The only “extreme” behavior exhibited during the day (apart from the crowds’ exuberant chanting, “Vote them out!”) was the attempt by citizens to carry their American flags into the capitol.

Patriots at the event handed out hundreds of small American flags for attendees to wave. But capitol security refused entrance to anyone carrying one of the 3x3 inch flags, citing “security concerns.” Pressed for the law justifying their rule, security claimed capitol rules prohibit signs or banners from entering the building and the flags fell under that category. When told of the situation, Michael Reagan quipped, “It’s just the wrong flag!”

Unfortunately, it’s not the first time displays of patriotism from average citizens have been thwarted at the California State Capitol. Last July a group of high school students attending a youth leadership conference were confronted by armed guards after the students began singing the National Anthem in the capitol rotunda. The students were told they needed a government permit to sing in the capitol. These two instances of government bureaucracy and elitism at its worst are the very reason citizens are compelled to attend the tea parties.

California is known for chastising its elected officials when they break promises or defy the people’s will. Perhaps emotions can get the better of California voters, but often enough their emotions are channeled into good public policy. The removal of Governor Gray Davis for his deficit spending (a relatively paltry $38 billion!) was grassroots initiated and sustained. It was Californians who passed the revolutionary Proposition 13 back in 1978. Property taxes were out of control, so voters told government to stop gouging taxpayers.

California can and should lead the way in this burgeoning nationwide tax revolt. After all, we have the most to lose.