M.D. Kittle
|
Posted: Aug 13, 2021 1:21 PM
Share   Tweet
The opinions expressed by columnists are their own and do not necessarily represent the views of Townhall.com. 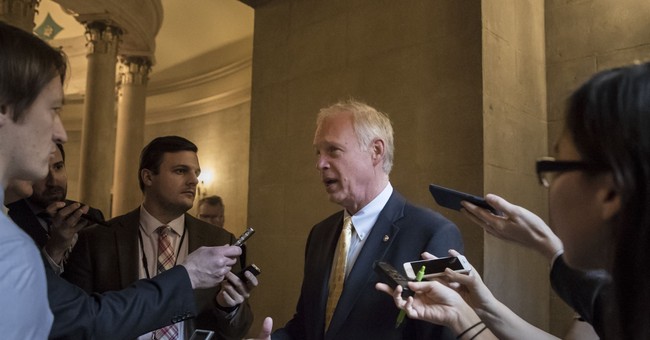 This should come as no surprise to anyone paying attention. The Journal Sentinel has been at open war with the Oshkosh Republican for years.

But it is amazing the lengths this newspaper will go to in pursuit of smearing Wisconsin’s senior U.S. senator and twisting the truth.

The story, bordering on libellous, is breathlessly headlined, “Ron Johnson’s efforts on Trump tax cut delivered millions in savings to billionaires who financed his campaigns, IRS records show.” The false narrative, of course, is the senator was doing the bidding of the evil rich.

In fact, as the authors begrudgingly concede, Johnson sought and received through legislative horse-trading a better deal for so-called pass-through businesses in the Republican tax cut of 2017. More than 90 percent of U.S. businesses are classified as  pass-through businesses, whose income, unlike corporations, is reported on the owners’ tax returns and taxed under the individual income tax. Johnson has said he did not want the historic Tax Cuts and Jobs Act to leave millions of businesses behind in the kind of pro-growth tax relief corporations would be receiving.

As the ProPublica piece takes great pains to point out, “Dick and Liz Uihlein of packaging giant Uline, along with roofing magnate Diane Hendricks” benefitted from the tax relief. Again, so did the owners of small and large businesses nationwide who begged lawmakers for relief from punishing tax rates. But the wealthy Wisconsinites collectively have contributed “around $20 million” to groups supporting Johnson’s 2016 reelection campaign, among others, so ProPublica wants you to believe there’s some kind of quid pro quo going on here.

The liberal nonprofit makes faulty charges, and the Johnson-hating Journal Sentinel sanctions the accusations, based on documents that were illegally disclosed.

“ProPublica has obtained a trove of IRS records covering thousands of the wealthiest Americans. The records have enabled reporters this year to explore the diverse menu of options the tax code affords the ultrawealthy to avoid paying taxes,” the hit piece proudly declares.

Who would have access to such a trove? The Biden IRS, perhaps? It’s a felony for an employee of the U.S. government to leak a tax return or information about a tax return. As Forbes reports, IRS Commissioner Charles Rettig in June assured lawmakers internal and external investigators are working to determine whether the data ProPublica used was illegally obtained.

“The IRS has been weaponized before to target political opponents and this latest leak of confidential tax records from the IRS is suggestive of the most troubling type of politically motivated misconduct — to target innocent people and advance extreme, partisan legislation,” said U.S. Rep. Darrell Issa (R-Calif.) who, with U.S. Rep. Jim Jordan (R-Ohio), launched a separate probe into the leaker.

ProPublica insists it does not know the identity of the source that dropped all the confidential taxpayer information on its doorstep. The tax-exempt news organization assures that it has gone to “considerable lengths” to ensure the information is accurate.

It has gone to considerable lengths to paint a phony picture of political corruption, but that’s what left-leaning media outlets like ProPublica and the Milwaukee Journal Sentinel do. The Uihleins and Hendricks have long been a target of the left and their media allies for their support of limited government policies and politicians. There’s nothing illegal about their donations. But they are rich and they are conservatives, making them criminals in the warped minds of the rabid, redistributionist left.

The Milwaukee Journal Sentinel clearly despises Johnson. It has been on a crusade to push out Johnson, who hasn’t bought into the left’s “insurrection” narrative.

ProPublica is the left’s investigative reporter. The 501(c)(3)  is supported by some of the most well-heeled liberals and left-leaning groups in America. In 2017, ProPublica recorded $43.5 million in revenue. Yes, there’s George Soros money involved. And a lot of founding cash from the late Herb Sandler and his Sandler Foundation. It has generously supported liberal organizations such as the Center for American Progress, which coincidentally has railed against the 2017 tax cut, particularly the pass-through provision. Now their Democratic allies are looking for a $3.5 trillion spending plan paid for by higher taxes, including a proposal that would get rid of the tax savings for pass-through businesses.

ProPublica also has received at least $480,000 from Donald Sussman, who donated $25 million to support Democrats in the 2018 election cycle, and the left-wing advocacy group Solidarity Giving gave $150,000, according to Influence Watch.

Interestingly, the group doesn’t note the tax returns of big billionaire libs like Jeff Bezos and Elon Musk in its reporting.

If it’s about following the money, ProPublica is backed by some pretty influential benefactors that have dropped a lot of money for liberal, big-government causes. But ProPublica’s story isn’t about exposing the truth; It’s about twisting it for political purposes. And the “journalists” involved appear to be willing to do anything, including violating privacy rights, to accomplish their ends.