M.D. Kittle
|
Posted: Apr 15, 2020 11:48 AM
Share   Tweet
The opinions expressed by columnists are their own and do not necessarily represent the views of Townhall.com. 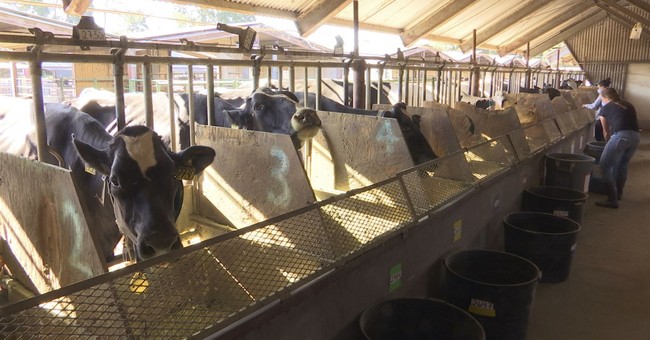 MADISON — Times were tough down on the farm before the COVID-19 outbreak. Now, each new day is filled with dread, collapsing markets, looming bankruptcies, and ruined lives.

“At this point, we’re all looking at a train barreling over a cliff, not really sure if anyone is going to survive when we hit the bottom,” Brodhead-area farmer Rob Riemer told Vicki McKenna this week on NewsTalk 1310 WIBA.

The pasture-raised cattle and egg Riemer Family Farm dates back nearly a century. The third generation now wonders if their southcentral Wisconsin farm will survive the coming months.

The pandemic and Gov. Tony Evers’ sweeping Safer at Home order locking down much of Wisconsin has hit America’s Dairyland particularly hard.

Dan Smith, president and CEO of Cooperative Network, said the agriculture industry in general was just beginning a slow recovery from a painful downturn over the last four or five years. The severity of the coronavirus shutdown of the economy at large was like “pouring gasoline on a fire,” Smith said.

Overnight, the dairy industry lost about 40 percent of its marketplace — the food service industry. A big chunk of that market includes schools, which began closing en masse a month ago. Markets instantly changed, as Evers ordered most consumers to stay home. Food processors couldn’t turn on a dime to meet the changes, and everything seemed to slow to a crawl.

Riemer said last year was bad enough. His farm suffered a “six-figure loss.” The reserves are gone. Now, if the economic shutdown continues, his family farm, like so many family farms, won’t make it.

“We’re just talking a matter of months basically. Most of us will probably survive a month or two, some will not. But if this goes on extended, by the end of the summer, fall, or later, I don’t think you’re going to have more than a handful of farms survive this,” the farmer said.

A report earlier this month, Institute for Reforming Government lays out the rising challenges confronting Wisconsin farmers and calls on the Legislature to finish the business of passing reform legislation that will help bring back prosperity to the Dairyland’s farms.

Smith said farmers do need help, but just throwing money at the problem isn’t going to cut it. He said it’s time for systemic changes to sustain agriculture and promote a safe and reliable food system.

But things are going to have to change quickly if Wisconsin wants to save its family farms, the ag expert said.

“Agriculture was already the at-risk patient, to put it in the language of the pandemic,” Smith said. “This really hits at the worst possible time.”

Listen to the Vicki McKenna’s interview with Rob Riemer here.