M.D. Kittle
|
Posted: May 14, 2019 12:01 AM
Share   Tweet
The opinions expressed by columnists are their own and do not necessarily represent the views of Townhall.com. 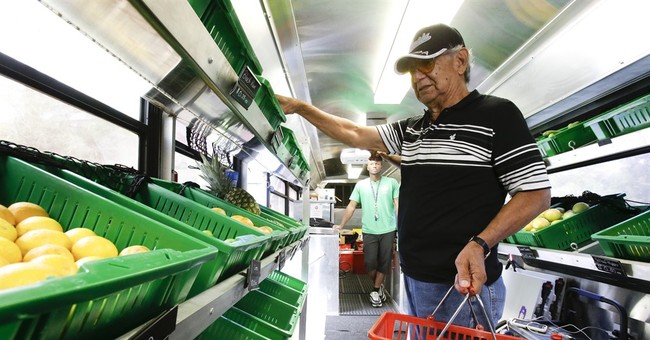 MADISON, Wis. — Wording changes to the “Residency Verification” section of the state’s FoodShare handbook appears to take the teeth out of laws designed to prevent public benefit fraud and to protect taxpayers.

The chairman of the state Senate’s Health and Human Services Committee tells MacIver News Service that the bureaucratic language finessing “raises a lot of red flags” and only bolsters the argument for the agency oversight bills passed in December’s controversial extraordinary legislative session.

FoodShare, Wisconsin’s food and nutrition assistance program for the poor, is designed to help low-income residents residing in Wisconsin.

Changes to the FoodShare handbook used by employees in the state Department of Health Services Division of Medicaid Servicesnixes a key section of language on residency eligibility.

“If it becomes known that a FoodShare applicant or member does not reside in Wisconsin, action must be taken to deny or terminate FoodShare benefits for this individual,” the agency policy stated up until April 19, the effective date of the guidebook changes. Rebecca McAtee, director of the Bureau of Enrollment Policy and Systems, sent the memo to handbook users.

DHS tweaks the language to say “Verification of the primary person’s residency is required at application for FoodShare eligibility, with an exception for homeless and migrant workers (emphasis added to reflect handbook changes).”

The revised language removes “deny or terminate” benefits from the language, instead directing FoodShare agents to “follow up with the food unit to determine residency.”

Verification of the primary person’s residency is required at application for FoodShare eligibility, with an exception for homeless and migrant workers.

“I’ve got serious concerns with the fact that DHS is trying to water down requirements for the FoodShare program,” said Sen. Patrick Testin (R-Stevens Point), chairman of the Senate’s Health and Human Services Committee.

Lawmakers said they were not aware of the changes until MacIver News Service brought the updated FoodShare handbook to their attention. Testin late last week showed DHS Secretary-designee Andrea Palm the revised language.

“The DHS secretary-designee didn’t know about this, either,” the senator said. “I asked her to get me a clarification on why the changes were made.”

DHS officials on Friday afternoon did not answer MacIver News Service’s questions about the handbook changes.

State Sen. Dale Kooyenga (R-Brookfield), vice chairman of the Health and Human Services Committee, said this is not the way it’s supposed to work.

“You have the administrative part of government, not elected officials but unelected bureaucrats making up their own rules,” Kooyenga said. “We’ve seen this from both parties. This is the kind of stuff we were trying to rein in during the extraordinary session.”

The Republican-controlled Legislature in December passed three laws with scores of provisions that effectively limit the expanded power of the executive branch. Critics say the extraordinary session was a “power grab” by Republicans to curtail the authority of then-incoming Gov. Tony Evers and newly elected Attorney General Josh Kaul, both liberal Democrats. Evers’ liberal allies filed multiple lawsuits challenging the constitutionality of the legislation and the session itself. The litigation is working through the court system.

Among the measures passed is a law codifying a state Supreme Court position that prohibits courts from according deference, or simply taking the word, of agency interpretations of law in legal disputes.

The bills, signed by former Republican Gov. Scott Walker just weeks before he left office, establishes a number of requirements on agency use of so-called “guidance documents,” similar to the instructions in the FoodShare handbook.The bill requires agencies to submit proposed guidance documents to the Legislative Reference Bureau for publication and to allow a period for written public comment. Moreover, it spells out that guidance documents do not have the force of law, contrary to what bureaucrats have previously attempted to claim.

It excises “at the time of application” from the previous instructions.

Under Exception, the handbook notes:

Evers wants to expand taxpayer-funded public assistance program at every turn. His $84.2 billion budget proposal would have rolled back a number of conservative reforms to the state’s welfare programs.

For instance, able-bodied adults with dependents aged six to 18 would no longer need to satisfy work requirements in order to receive FoodShare. Drug testing for most public assistance programs is eliminated in the Democrat’s proposal. Evers’ budget includes $5.3 million to help welfare recipients in the Wisconsin Works (W-2) program “access affordable Internet.”

The Republican-controlled Joint Finance Committee last week wiped out those provisions on the way to cutting 131 non-fiscal policy items from the governor’s budget plan.

Testin said the administration should be mindful of government watchdog reports from a few years back on waste and fraud in the FoodShare system.

A 2012 audit found alarming incidents of fraud in the public assistance program. The Legislative Audit Bureau review discovered nearly 450 state prison inmates received FoodShare benefits while they were behind bars. Cases involved family members using the benefits of the incarcerated FoodShare claimants. Nearly 1,200 others with active felony warrants or probation or parole violations were eating on the taxpayers’ dime, clear violations of federal law.

“(W)e found that recipients who appear to have intentionally violated program rules are often not disqualified, which allows individuals who repeatedly violate program rules to reapply for FoodShare benefits and immediately begin receiving them,” the audit stated.

A FoodShare fraud ring was busted in Milwaukee the year before the 2012 audit was published.

Testin said he doesn’t want to see bureaucratic-led changes in enforcement practices that open the door to abuse of taxpayer-supported assistance programs.

“I want to give the secretary-designee the benefit of the doubt that she wasn’t aware of this,” Testin said. I certainly hope this gets changed because it certainly raises a lot of red flags.”