Matt Vespa
|
Posted: Feb 25, 2020 6:00 AM
Share   Tweet
The opinions expressed by columnists are their own and do not necessarily represent the views of Townhall.com. 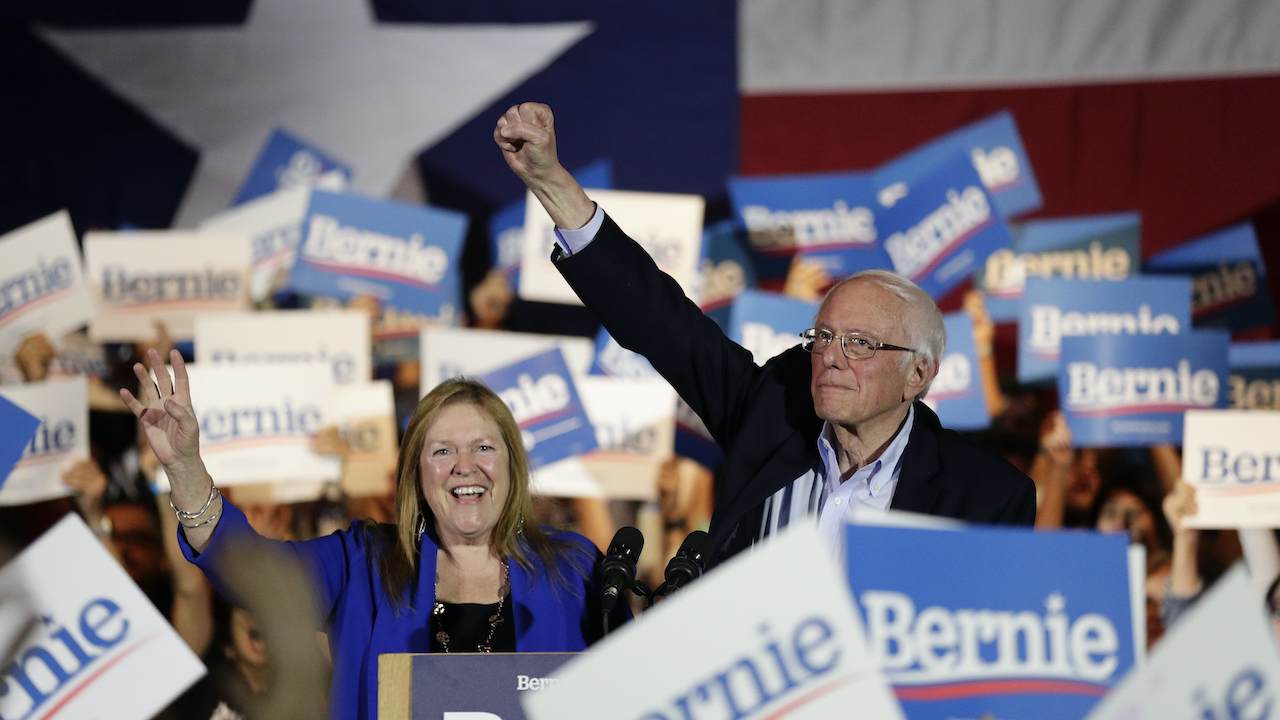 Sen. Bernie Sanders is the frontrunner. He really solidified that position with his New Hampshire win, but it wasn’t seen as official with some until his total domination of the Nevada caucuses. I mean, even if there were major Iowa-like issues with the vote tabulations, there was no question—Bernie won. His exits among key groups in the state made Sanders virtually unbeatable. There was no way Bernie was going to lose this contest, one he did decently back in 2016. Now, he heads to South Carolina, where he is bound to chip away former Vice President Joe Biden’s firewall among black voters. Biden has seen his support among black voters drop by some 19 points. And it wouldn’t shock me if Sanders ekes out a win here. If that happens, the race is all but over or at least it becomes Sanders’ to lose.

It’s quite the flip of Sanders’ 2016 script: Bernie busting down Biden’s firewall by showing he can win black voters, triumphing in a state that derailed his first presidential run, and now claiming that he won three straight contests. Yes, former South Bend Mayor Pete Buttigieg won more delegates in Iowa, but Sanders won the popular vote—which he chalks up as a win. A little parsing there, but a New Hampshire, Nevada, and South Carolina win still provides momentum that I don’t think any other Democratic candidate could stop. Even if Joe Biden wins in South Carolina, is it enough? No. After abysmal finishes in New Hampshire and Nevada and being unable to show he is a heavyweight by striking a decisive win in South Carolina, there really isn’t much of a case for Joe to stay in this fight. Joe needs to win big—and he probably won’t on Saturday.

So, we now have a moment where a self-described democratic socialist is going to be nominated by a major party. It shows the Democratic Party’s lurch to the Left. And Bernie is so radical, it’s a shoo-in for President Trump, right? I don’t know about that. I try not to read the tea leaves too early, but the groups that gave Sanders his win in Nevada were young people, Latinos, and union workers (via NBC News) [emphasis mine]:

Sanders, coming off a strong showing in the Iowa caucuses and a narrow victory in the New Hampshire primary, rode a wave of support from young voters, liberal voters and Latinos to a runaway first-place finish in Saturday's contest — strengthening his status as the front-runner. It remains too early to call second and third-place finishers.

With roughly 50 percent of precincts in the state reporting, Sanders had 46.6 percent of the vote. Former Vice President Joe Biden had 19.2 percent, while former South Bend, Indiana Mayor Pete Buttigieg had 15.4 percent and Sen. Elizabeth Warren, D-Mass., had 10.3 percent. Mike Bloomberg, who is surging in national polls but turned in a rocky debate performance in Las Vegas this week, is skipping the first four states and wasn't on the ballot here.

Sanders' win — in the third contest in the 2020 Democratic primary — shows that the Vermont senator can compete strongly among a more diverse electorate: participants in Saturday's contest are much more racially diverse than voters in any presidential contest so far this year, according to results from the NBC News entrance poll.

Ahead of the caucuses, the state's culinary union — one of the most influential unions in the hospitality-industry-heavy state — appeared to come out against the candidate with a flyer proclaiming that his “Medicare for All” plan would "end Culinary health care." Despite that, more than half of Nevada caucusgoers said they supported Sanders' signature “Medicare for All” proposal, according to results from the NBC News Entrance Poll.

In fact, Sanders’ strength with Latinos which was reported before the caucuses turned out to be the harbinger for his resounding win. If these groups sound familiar, you’re right; it’s the Obama coalition. And that’s what’s scary about Bernie's Nevada beatdown. We have faced this coalition twice and lost. This is one voter coalition that you could probably dub unbeatable.

We’ll have a better picture of this after Super Tuesday, but the missing piece here is white working-class voters. Obama didn’t do well with this group, but it was just enough to ensure his decisive wins in 2008 and 2012. Sanders will need to win at least 36 percent of the white working-class vote, the same total as Obama in 2012. If things trend in that direction, then, yes—it may be time to panic. For now, I’m just uneasy, though I do see healthy helpings of crow for my consumption if this comes to fruition, given that I have declared that Trump will win re-election and that this 2020 Democratic field doesn’t have anyone who can beat him. Granted, it’s still early.

For goodness sake, Democrats don’t have an official nominee yet. Still, I see some of my conservative pals on social media spreading their 2020 Electoral College projections as Bernie seems unstoppable. I mean, they’re all saying this will be a 400+ electoral landslide for Trump. With these Nevada exits on Bernie, I’m not so sure we’re going to see 1972 Nixon-McGovern numbers here.

One of the interesting outcomes from this Nevada contest was the union vote. The influential Culinary Workers Union didn’t endorse anyone. Biden was seen as too yesterday, while Bernie Sanders’ Medicare for All was a bridge too far. The rank-and-file union worker broke with leadership. Will that happen in the Rust Belt? Will these folks buck their union leadership on Bernie Sanders who is running on a platform that will take away 150+ million private health care plans, and millions of union households are in the crosshairs? Nevada union workers didn’t care. Will that trend continue as we move east and south with these primary contests?

It was reported that another election-killing issue for Bernie might be his universal fracking ban. In states, like Pennsylvania, that would kill hundreds of thousands of jobs. Top union leaders in the Keystone State have stated because of this if Bernie or Liz Warren is the nominee, they’re telling their members to either vote for Trump or sit out the election. Losing health insurance is one thing, having your job on the chopping block is another—and Sanders has no qualms about sentencing millions of Americans to economic destitution with his climate change policy. The point is a lot of folks on the right think the socialist, communist, or looney left-winger label is enough to kill this presidential campaign. No. It’s not. Bernie maybe all of those things, but Sanders has been in the spotlight for years. He has a national constituency. People know where he stands, and he very well could be the nominee by the summer or at the very least gobble up enough delegates where things can get very bloody and interesting for Democrats come convention time. The fact that a man like this is getting this close is another terrifying aspect of the political landscape. Yet, the blowing up the system because it's rigged might be appealing to some of Trump’s supporters. And here is another cause for worry. Bernie’s main line of creating a government out of the ashes of the old order that works for everyone is appealing to two blocs of Trump’s coalition.

The Cato Institute did a survey of some 8,000 voters of Trump’s base, which is diverse. It may shock some, but the two groups, American preservationists and anti-Elites, are economic progressives, with both believing that the system is rigged for the wealthy and powerful. It’s an odd group indeed. American Preservationists are folks that are likely to be on Medicaid. Anti-Elites don’t harbor a hatred of Hillary Clinton; half surveyed at the time viewed her favorably. While not a hardcore primary voting bloc, if they did, they probably voted for…John Kasich. American Preservationists might find Bernie’s message appealing, but they’re hardcore on immigration enforcement, which the Democratic Party is decidedly against—and this issue remains salient and one that gets people out to vote. It’s partially responsible for Ohio coming solid red since 2016. The anti-Elites, the ones who dropped votes for Kasich, might keep me up at night.

Now, there is some hope. First, rust belt workers could follow their leadership and not take the plunge on a man who is going to destroy their livelihoods—not all union workers are alike. Second, the working-class vote could remain firmly in Trump’s hands. This is a huge voter bloc, one that the Left has ignored for years which is why Trump is president and Hillary Clinton is not. Minor shifts with working-class white can make or break a candidate. As The New Republic warned in 2014, a mere one percent drop in support could endanger a Democrat. And this needle can be moved especially if the Republicans highlight Bernie’s tab for his left-wing agenda but hitting home the job losses and the stripping of health care plans. There’s Israel. There’s his affinity for Latin American strongmen who are of the left-wing persuasion. There’s plenty to muddy the waters with the working-class whites, but this is going to be nasty. We’ve all heard and know about base-centric elections. Well, this one will be just that but multiply it by a thousand.

We all say that political coalitions are not transferable; Hillary found that out due to her horrendous support among young voters and the white working-class that the Obama collation wasn’t going to save her. Yet, Sanders might be re-conscripting them all. Things will be clearer on March 3.