Matt Vespa
|
Posted: Nov 18, 2019 9:00 PM
Share   Tweet
The opinions expressed by columnists are their own and do not necessarily represent the views of Townhall.com. 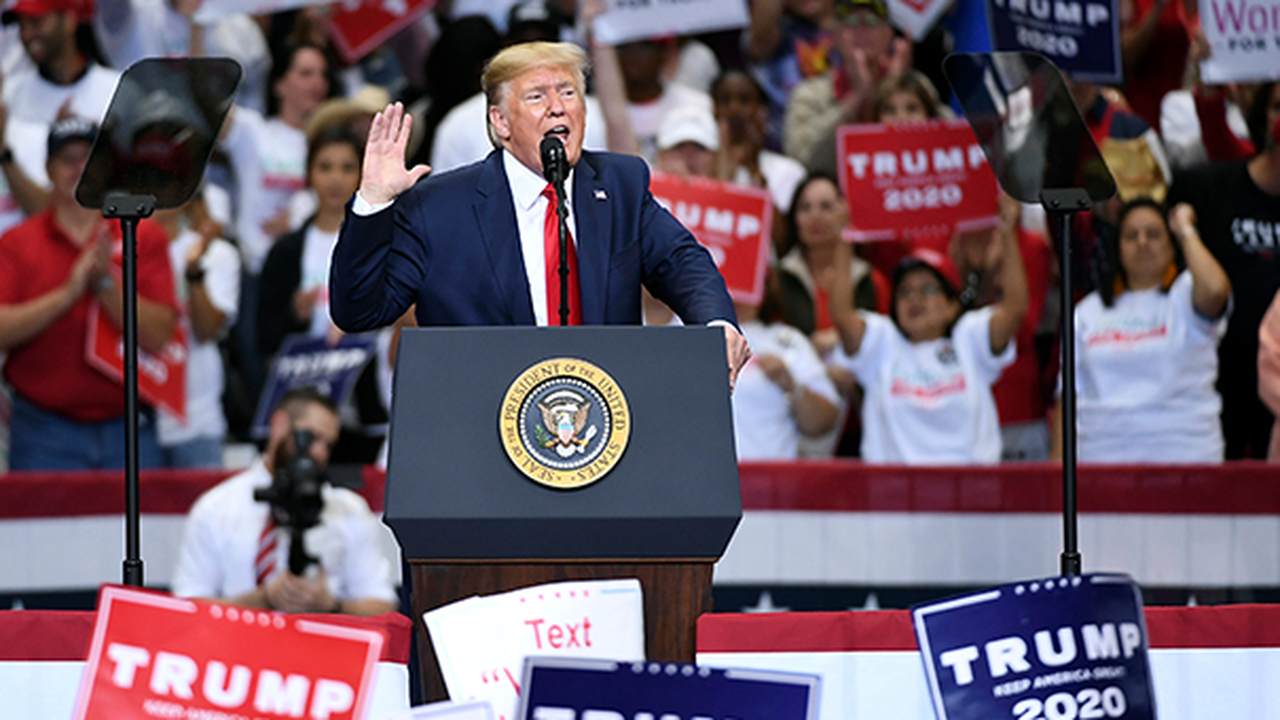 Okay, I have to admit. I was not a fan of Donald Trump. I supported Scott Walker, then Marco Rubio, and then Trump. I wanted a conservative Republican. I thought Trump was a joke. It was establishment gripes, I guess. Yet, I’m also a loyal party member. No matter what, any Republican is better than a Democrat any day of the week. Period. We had a brutal primary in 2016. The other candidates on the stage, Rubio, Walker, Bush, Fiorina, Cruz, etc. had their chance to gash and end Trump. They didn’t. They couldn’t. After a months-long slog, Trump secured the delegates needed to win the Republican nomination. It was over.

There isn’t enough gold in Fort Knox to make me even consider voting for Hillary Clinton. And that was the point. That was the new mission: defeating Hillary Clinton. At that point, the only person who would have the best chance was Donald Trump. He was our nominee. I had to back him.

As you know, some Republicans didn’t. They still don’t. They don’t like his tweets, his differences on policy, and the fact that he’s not conservative. That part is true. He’s a right-leaning populist. Even then, while the Never Trump crew complained about how Trump was the nominee, they didn’t have a plan. They didn’t even have an alternative candidate. And while they sulked, they could’ve been working to help us defeat Clinton.

Since then, a few have drifted over to the dark side, getting paid gigs on liberal networks like CNN and MSNBC to bash Trump, the GOP, and complain about how Trump isn’t normal or something. That’s the point. People wanted someone way the hell out there, especially Republicans who were sick of losing two presidential elections back-to-back. Losing with dignity is still losing. The John McCain and Mitt Romney ways are done. We want people who will deliver haymakers to the Democrats and their allies in the media.

And that’s another aspect entirely. While I wasn’t a die-hard Trump supporter, the pervasive and absurd media attacks on this White House has turned me into a hardcore MAGA follower. That’s one of the many, many in-kind contributions networks like CNN have doled out since the 2016 election. For many, they may not have been Trump fans, but after the fake news decided to go absolutely crazy, legions of them have been created. It’s why the GOP approval for President Trump remains near 90 percent. And on Election Day 2016, it was at that number as well, a sign that Trump won over the base, even if it were begrudgingly so. The party knew what was at stake.

So, why do we still have these pockets of resistance from within the GOP? Yes, it’s around five to 10 percent of the party, but these people have platforms, they have listeners and readers, they have some money, and they can be a total pain in the ass when we need to focus solely on beating the Democrats. Like the liberal media, they play the game of “this, that, or the other” with fellow Republicans concerning their support for Trump. It’s outrageous. Is Trump truly the biggest disappointment in GOP politics? Again, I wasn’t a fan of the guy, but what he’s done isn’t all that different from conservative Republican orthodoxy.

He cut taxes, some of the largest since the Bush tax cuts that generated 52 months of uninterrupted economic growth, nixed the Obamacare individual mandate penalty, and created nearly four million new jobs. Oh, there’s more. This administration has generated record stock market gains, the highest small business and consumer confidence markers in decades, and unemployment has hit a near half-century low—and this applies across the board with women, black, Asian, and Hispanic unemployment numbers. They’re stellar. Job-killing regulations have been gutted, the Obama war on coal is over, the U.S. embassy in Israel is now in Jerusalem where it belongs, and we got NATO member nations forking over more cash in accordance with their commitments in the treaty.

We actually have an administration that is doing its best to enforce immigration laws, deporting the criminal alien scum from our borders and is reshaping the courts rapidly. The Ninth Circuit, once a bastion for progressive nonsense as evidenced by how often its decisions were overturned, is now almost sane. And did I mention we have Justices Neil Gorsuch and Brett Kavanaugh on the Court, shoring up a 5-4 majority on the nation’s highest legal body? The list of accomplishments goes on and on, and you have to wonder how some folks still consider this bad news? How is this un-Republican or anti-conservative? To channel my inner Mike Francesa, the fact of the matter is that this is what the conservative Republican agenda has been since Reagan completed the Barry Goldwater renovation of the GOP that started in 1964. There’s that saying from those in the trenches at this time: Goldwater didn’t lose in '64; it just took 16 years to count all the votes.

If you find agreement with 85 percent of what Trump is doing or any candidate for that matter, how are you not voting for him? In 2016, there was an issue about trust with Trump, his past liberal positions. Yes, a cause for concern that has been wiped out. People change, and when you’re a billionaire who deals in real estate, you have to support both sides. The same goes for construction companies and their staff. You need to give to both the GOP and the Democrats if you want a chance of nabbing those top contracts. Looking back, that was a silly point, but some Never Trumpers still cling to this and other nonsensical points to mock or marginalize the Trump White House.

Could it be that these folks just don’t like his personality? We’ve seen that in polling with likely voters that Trump’s personal scores are garbage, but how he’s handled the economy is pretty good. Alas, the GOP operative’s greatest headache, parsing the president’s low personal approval with his solid numbers on policy—how do you craft a message around that? I get it. Maybe that’s the case. I don’t know, time will tell.

Now, as for sins of past GOP presidents, is Trump’s the worst? Of course, the Never Trump wing will make up some arguments. The budget deficit, trade, and the border wall would probably be the top three issues the anti-Trump wing of the GOP will zero in on, but this is rather tame compared to George H.W. Bush’s broken promise of no new taxes. Want to discuss the deficit? So, please explain how Medicare Part D, an entitlement we have yet to pay for, under Bush 43, was an exemplar of fiscal conservatism. The plan has blown up the unfunded liability of our entitlement state, which has already soared into the tens of trillions. And what about Richard Nixon? Yes, he opened the door to China in a brilliant geopolitical move that turned one billion people against Moscow and landlocked the USSR politically until it collapsed in the 1990s. If Nixon wasn’t so paranoid and got his insomnia issues under control, he could’ve gone down as one of the finest foreign policy thinkers ever to occupy the White House. That’s wasn’t the case. I frankly don’t really care about Watergate. Compared to the alleged anti-Trump deep state coup attempt that’s ongoing against this administration, that little break-in was minor league. Nixon created the Environmental Protection Agency, which was weaponized under Obama, a much greater sin in GOP politics.

And still, I would have voted for Nixon. And I would have voted for both Bushes because a handful of issues isn’t necessarily disqualifying. Defeating the Democrats is a much more pressing concern. Granted, other voters are a bit pickier. Abortion and gun rights are two issues where I do not compromise. If you’re a pro-choice and anti-Second Amendment Republican, get lost. Luckily, those clowns are never in the top tier, and they’re few and far between now.

On trade, yes, the party has changed. The leadership may be still pro-free trade, but the base has become a tad more protectionist, for lack of a better term. They want better deals, which Trump promised. Democratic voters are also leery of free-trade promises. There’s a disconnect here, and even with Trump taking a more "America First" tone, he was still able to renegotiate a trade deal between Canada and Mexico that’s in limbo in Congress because Democrats don’t want to give this White House a win. Yes, the budget is still out of control, but past GOP presidents have broken that promise—and there wasn’t Bush Derangement Syndrome from the Right. With the wall, its construction has been disappointing, but only that it’s not going up as quickly. The Supreme Court ruled that the Pentagon could redirect funds for this purpose; it’s a national security priority. And yes, Trump knows this is one area he has to deliver on because it was the bedrock for his 2016 campaign. It’s coming along, albeit slowly due to divided government, legal actions, and Democratic interference.

So, when it’s all said and done, for me, trade is the issue where I might disagree with Trump. That’s not enough for me to abandon him in 2020. And I think that goes for the vast majority of the party as well. It’s also an issue where we knew there would be a policy shift; the man is more populist. I can live with that, especially seeing the agenda of the opposition. There’s really not much of a debate here, folks. Trump promotes what conservatives want nearly all the time. The choice is quite clear for 2020. Will Never Trumpers finally come to their senses and get on board the Trump train? There’s still time.