Matt Towery
|
Posted: Feb 11, 2016 12:01 AM
Share   Tweet
The opinions expressed by columnists are their own and do not necessarily represent the views of Townhall.com. 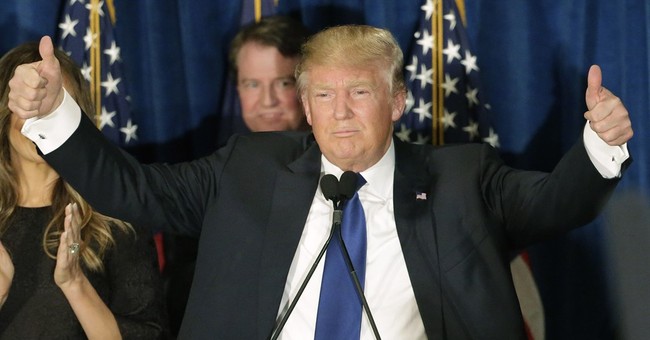 I know, I should quit saying, "I told you so." But I was right in December 2014 in this column and I'm still right more than a year later, after the New Hampshire primary. Donald Trump gets it when it comes to how so many frustrated Americans feel. He has tapped into a populist revulsion to a national political tableau of political correctness, indecisiveness, weakness and expanded government power and spending.

And it's not that I'm in the bag for Trump. My son's Opinion Savvy polling firm, which I use for my analysis, was about the only pollster to show Trump not winning big in Iowa, which is not our home territory. The South is home, however, and it happens to be where the Republican nomination will be decided this year.

But before explaining how that will go down, let's reflect on why Trump kicked butt in the nation's first primary in New Hampshire.

Trump's victory was a validation of his blunt, tell-it-like-it-is approach, as opposed to what has for years been mundane, play-it-safe Republican politics. And his "ground game" in New Hampshire was the huge number of events attended by his sons and daughter, as well as by Trump himself.

How did I recognize more than a year ago that Trump's approach might work? Because I spent decades working with a man named Newt Gingrich. Gingrich built his brand by taking on his party's establishment and making blunt and sometimes controversial statements. And Trump has the same indefatigable energy and zeal that Gingrich showed throughout his political career.

Yes, Gingrich had much greater knowledge of the political process and government. But Trump has sophisticated financial and business experience that no modern-day politician can match. And as Newt would freely admit, Trump has the one thing that cost Gingrich the nomination in 2012 after he won in South Carolina: money. Recall that Mitt Romney, the establishment candidate that year, had plenty of cash and he spent it to savage Gingrich in a Florida primary that followed less than a week after Gingrich's South Carolina win.

And money is becoming even more important as we move toward the coming contests in the South. If he chooses to, Trump can outspend all of his opponents combined. The several establishment candidates left standing after New Hampshire -- John Kasich, Jeb Bush and Marco Rubio -- must spend precious resources just to try to leave the Palmetto State with a chance to emerge viable going into the big "SEC" southern-dominated Super Tuesday of March 1.

That means that the candidates vying for the right to carry a lone establishment flag into Florida's likely decisive winner-take-all contest in mid-March will have to spend their next week in South Carolina attacking one another instead of Trump. And they won't be able to spend much time picking at Ted Cruz, who will escape from the evangelical-voter-starved Northeast to a South Carolina GOP that has a strong contingent of the voters who are more likely to support his candidacy.

And Trump's endless visits to southern states, plus his vocal support for veterans, will give him an additional boost in South Carolina, which is filled with military and ex-military voters.

So, as was noted in this column several weeks ago, South Carolina will not be about defeating Trump or Cruz. Both will likely emerge with more delegates than the other contestants, and both will remain more than viable going into the March contests. Instead, the South Carolina Republican primary will be about which of the three remaining establishment contestants will be still standing and with cash on hand to remain viable.

Conventional wisdom among the usual DC/NY pundits is that once the establishment choice emerges, that candidate will consolidate the vote of all the other mainstream candidates and the math will favor that candidate wiping Trump and Cruz out. That is way off base.

The states that will decide this contest, like Georgia and Florida, are different animals than Iowa or New Hampshire. Trump's populist themes resonate much more with southern voters. And no, a Florida GOP contest is not that different from a Georgia or Tennessee primary. While Cruz will take the majority of evangelical votes, Trump will take a strong share as well.

No, it's no guarantee that Trump will win it all. But I'm 100 percent sure, in proud Trumpian style, that I'm still right: 14 months and going strong.