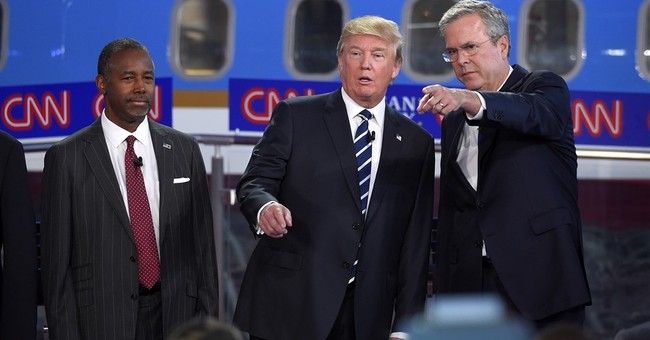 Trending
It's ironic that longtime baseball icon Yogi Berra died this week. "It's deja vu all over again," the most famous of his many zany quotes, seems relevant in light of the latest CNN Republican presidential debate.

Back in 2007, as the housing market in Florida was starting to collapse, a CNN presidential debate in Tampa all but ignored that looming crisis and instead focused on other issues, many of them trivial. Eight years later, we are witnessing new versions of the same old nonsense. What makes this all the more frustrating is that Republican National Committee had openly said that it would seek debates that offered more discussion of important issues, instead of "gotcha" questions designed to pit Republicans against one another.

To many it seemed that most of the questions in the CNN debate held at the Reagan Library in California consisted of taking one negative comment made in a speech or an interview by a candidate about another, and then using it to provoke a fight. This made for a tiresome three-hour brawl, and the main result was to provide Democrats with quotes they themselves can use later to attack the eventual GOP nominee.

Recent polls indicate that most Americans don't trust the federal government and would like to see its role in their lives decreased. But to hear both the questions and answers in the few debates so far in this presidential cycle, the actual plans for reducing government are sparse if they are being made at all. To the contrary, many of the answers to the debate questions pointed to government -- more government -- to resolve the issue.

Consider that even as the candidates debated, the Fed was preparing to deal with a potential hike in the interest rate, and that the economies in many parts of the world were in shambles. Wouldn't the voters have been better served to hear a series of thoughtful questions that allowed the candidates to delve more deeply into where monetary policy and leadership of our economy should be headed? Instead they were treated to questions about how insulted Carly Fiorina was over Donald Trump's past comments concerning her looks. Riveting stuff, huh?

It's true that immigration and the threats from groups such as ISIS were a substantial part of the three-hour sweat-a-thon. (By the third hour it looked as if several of the candidates were going to simply melt away from the heat onstage.) But other vital issues were ignored, such as how to deal with the soaring cost of health-insurance premiums, or how to curtail the explosive rise in the prices of many of the drugs provided by pharmaceutical companies. Instead, the big healthcare showdown in this debate was over vaccinations and autism. Perhaps of interest, but hardly the health care question of our time.

And while the Iran agreement is a deadly serious matter, Donald Trump was right when he pointed out that no debate time was being devoted to North Korea, a nation that already actually has nuclear weapons, and possibly the capability of delivering them to U.S. soil. The threats to our security are many, and they deserve to be examined in depth, rather than in sound bites in a circus-style format.

In every way these debates failed to focus on the day-to-day concerns of voters. They instead ginned up too much invented controversy, and made bigger the cracks in what little foundation still exists for a united GOP. When opened up to social media questions from the public, we were treated to the candidates' naming of their potential Secret Service code names -- their "handles." Silly.

Meanwhile our police are being vilified. Crime is up in many cities. There is an unspoken disdain by top leaders towards our military. And we have a new racial divide not seen since the 1960s. None of this entered the debate.

Just as Yogi Berra said, it really is "deja vu all over again." If you still doubt it, just watch how the upcoming Democratic debates will fail to pit candidate against candidate, or to hit them with personal "gotcha" questions. It's a different ballgame for them, with a different set of rules.

Meanwhile, the issues that are important to those of us not in the D.C. bubble remain unaddressed.