The Price is Right; Budget Director Should Be Sent Packing 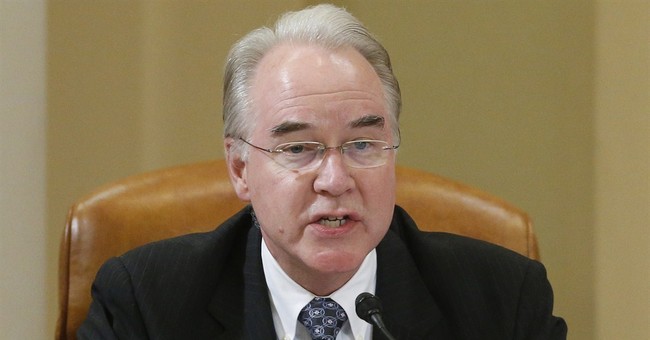 Rep. Tom Price (R-Ga) is by profession a physician, and a quiet and thoughtful man. For years he has led his colleagues in developing Republican policy in the House, and while he would appear to be a bit like the policy wonk, he has an ability to turn into a "superman" when it comes to taking strong conservative positions.

Based on recent news reports, Price appears to have the director of the Congressional Budget Office on his mind, and not in a kindly manner. Price is not alone. Conservatives have been increasingly irritated with the head of the CBO, whose duty is to provide non-partisan analysis of the economic impact of proposed legislation. The current director, Doug Elmendorf, has caught the attention of plenty of influential people, including the man who once represented much of Price's Georgia district, former House Speaker Newt Gingrich.

In his widely read online report, Gingrich made it clear that Elmendorf, who must be reappointed this year, should not be. He's right. Elmendorf's reliance on the infamous Jonathon Gruber is Exhibit A in the case against him. Gruber is the consultant who played a heavy role in creating the Affordable Care Act (aka Obamacare), and later he told numerous groups basically how stupid the American people are and how crafty he and his cohorts were in creating and presenting the legislation.

The CBO was created with the belief that there could actually be an independent and non-political staff of experts that could somehow tell policymakers just how much good or damage might come from the legislative efforts of politicians. While the concept seems sound, you can bet that anything created by and for politicians will indeed be political. No one should be so naive as to believe that the CBO can be made truly apolitical. It's better simply to acknowledge how CBO analysis can be used to move along legislation that appears to reflect the ruling party in Congress.

Well, the ruling party in Congress when Obamacare passed was the Democratic Party. They held the White House and control of both the House and the Senate. Elmendorf was their man. And he chose to estimate or "score" Obamacare. The CBO report on the then-proposed ACA allowed its proponents to argue that it would actually lower the deficit by more than $100 billion over a 10-year period. The CBO report was used to argue that Obamacare, if enacted, would have virtually no impact on net job loss or any other major aspect of our economy.

Of course, Director Elmendorf and his staff actually thanked the deceptive Gruber in the first page or so of their report, as Gingrich notes. Gingrich also describes how Gruber sat on the CBO's panel of health advisors at some point during the legislation's emergence into becoming law.

Of course, the same CBO led by the same director had to revise its assessment of Obamacare with regard to many of its actual results, including the likely loss of millions of jobs in the coming years. We all knew something was up when then-House Speaker Nancy Pelosi suggested the bill be passed, with the reading and vetting and analysis of it coming afterward.

Now the shoe is on the other foot. Republicans rule in the House and Senate and reflect a prevailing national dislike for the ACA. And it's likely that disdain will grow as more and more employees of companies find their insurance deductibles going sky high this year, making "insurance" meaningless unless someone faces a really bad year of health and hospitalization.

That leads to Rep. Price and a handful of colleagues, who have a say in whether Elmendorf stays or gets the boot. Price and others advocate a process of "dynamic scoring" of the economic impact of legislation, a process that would more realistically reflect the true impact that a bill such as Obamacare would have on the economy and the nation.

Whether the process for "scoring" bills remains "static" or becomes "dynamic" really doesn't matter as much as getting rid of those who helped carry the water for this disastrous monstrosity that has become Obamacare. And that means saying goodbye to Elmendorf.