"With Six You Get Eggroll" 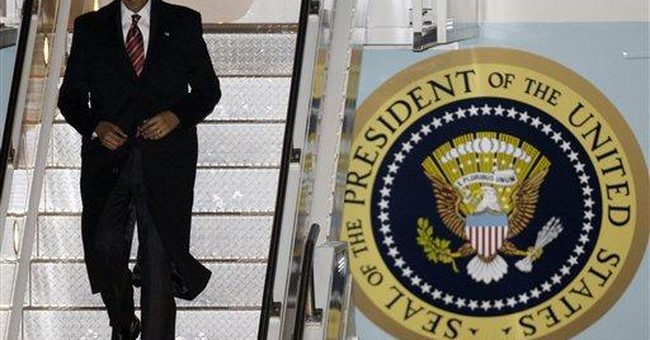 In the late 1960s, actress Doris Day filmed her last major motion picture. It was a comedy about the chaos that ensues when a widow and widower marry, forcing two families and two sets of friends to converge.

The film's title, "With Six You Get Eggroll," probably wouldn't make it past the mandarins of political correctness these days, but back then it was considered all in good fun.

Whatever the case, the 1968 comedy reminds me of the utterly un-funny situation we Americans now find ourselves in with China. When Richard Nixon breached the Great Wall with his visit to the communist dragon a generation ago, who could have imagined that one day the Chinese would hold an almost inconceivable amount of U.S. debt? Or that on the eve of a visit by an American president, Barack Obama, China's top finance officials would be lecturing the U.S. about its unbridled spending and ill-advised monetary policy?

To be sure, Obama didn't create this mess. But he and Congress do appear hell-bent on making it worse, what with their plans for gobs of new federal government spending.

Now we're stuck playing happy family with the Chinese, much as Doris Day had to do with her new husband and his brood in the movie. The difference is that on the silver screen, the problems of forced unity were silly, entertaining -- and fixable. With the U.S. and China, the situation is confounding and dangerous.

Consider this: On one hand, the Chinese hold massive U.S. debt. At the same time, they are almost surely responsible, either directly or in sympathy with other nations or groups who mean us harm, in spiking the Internet and our computer systems with viruses and spyware. It's believed that these intrusions include taps into top military sites, as well as into private energy company facilities, with the intent of damaging our vital power grids.

And don't be taken in by the talk of Chinese political and economic reforms. Business is indeed taking off in China, but it's still uncompromisingly a communist nation. President Obama learned how far Beijing still goes to control the Chinese population. The broadcast of his "town hall meeting" with students in Shanghai was kept from much of the population. He likely would have reached nearly as many citizens by using two tin cans and some string.

So when he Obama said that the Internet shouldn't be censored, his words were, well, mostly censored. Within an hour after he spoke bold words, Web pages were scrubbed. He might as well have spoken to a room of confidants.

Then there's global warming. While Al Gore and his followers agitate for utterly fantastic restrictions on "greenhouse gas" emissions, China keeps on keeping on as increasingly one of the biggest emitters of the naughty gases, especially those from burning coal. While the U.S. wrings it hands over carbon emissions in our country of 300 million or so people, the 1 billion-plus Chinese keep huffing and puffing their way to the kind of sustained economic growth we now dream about. (Maybe they hear about the American "green" elites that sport about in private jets and SUVs, on their way to their next environmental sermons.)

Here's the trillion-dollar riddle: Why would the Chinese want to one day cripple our military and our power-transmission capabilities, and generally hamstring the world's remaining superpower, if doing that would destroy our ability to pay them back the money we owe? Perhaps they're just keeping their options open.

A recent New York Times guest editorial praised the U.S. for having admitted throngs of Chinese as students to our universities. The piece exalted the exportation of knowledge to Asia, the new and coming power on the planet. I guess I was supposed to feel good about that, but somehow I didn't

The fact is that the main outcome of President Obama's visit to Asia, and especially China, was to reveal in stark terms that sometimes the joining at the hip of two "families" isn't necessarily a wise thing. Moreover, the U.S.-China situation today isn't so much a merger as an opening for them to one day effectively own us. Or destroy us.

I wonder: With such a transaction, would we get an egg roll?