Hit Delete ... and Accept Your Prize 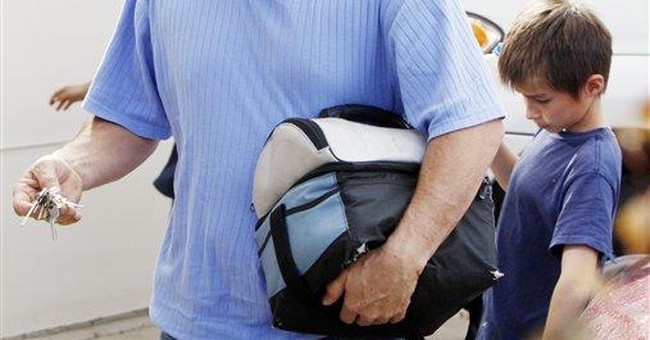 I almost had this column finished. Then I hit delete.

Why? Because I'm tired of hearing and talking and writing about congressional debates, outlandish "Balloon Boy" stunts" or the fallout from silly TV shows like "Jon and Kate Plus Eight." I'm sick of listening to how Barack Obama doesn't have a birth certificate. I wince at a White House that declares an entire cable network not to be a true "news network" because it alone tends to be more conservative, while the others tilt liberal. And if I see another report of the stock market soaring while we are just spending and printing money like madmen, I might just do a 1929-style jump myself!

In short, I'm just not tuned into "the news" right now. My readers, like myself, live in the real world, and real world people are hurting. No chatter about national health care, stimulus bills or any of the other junk that has dominated the news can solve the pain I see around me every day.

I go to restaurants, and they are mostly empty. Hotels often look desolate from lack of occupancy. Airlines have cut flights -- so you are still stuck in that middle row like a sardine -- but you have fewer choices of when to fly.

I hear people talking about the cutbacks they have made. I see friends who have been pillars of their community and whose generosity in the good times to important causes was genuine. Suddenly they're overwhelmed by a tsunami of collapse in their industries.

People have seen their life savings vanish into the sinking value of their homes or into bad investments. And there are plenty of young people on the streets looking for entry-level jobs that once were plentiful.

I'm tired of hearing about President Obama's faults or stylish brilliance. I don't want to hear or read about racism, Republicans versus Democrats and, Lord knows, health care reform.

I find myself writing the column for the families that are trying to figure out how to pay off their credit cards, all to the incessant soundtrack of TV tripe or endlessly carping politicians. Or for the single mothers who are wondering how they're going to get through Christmas this year. To them, be it known that not everyone who writes an opinion column gets lost in the policy and politics.

If there's a lesson to be learned from the past year or so, it's that ultimately we all must be responsible for our own economic and personal well-being. That's ironic, because with the current "it takes a village" collectivist mentality we see coming from Washington, it seems counterintuitive to suggest that the lesson of 2009 is self-reliance.

But think about it: Who keeps you going? Is it a government handout, some bureaucratic plan, a shot of stimulus into your wallet? Likely not. Recent times have taught us that the party can end quickly. And when everything comes crashing down, we and our families must turn within to find the resources to survive.

Now as we round the corner toward another Election Day, followed quickly by the end of another year, it seems only natural to reflect on what we have all been through, either personally or together with friends, relatives and coworkers.

When President Obama was named the winner of the Nobel Peace Prize, I had my own opinion about the award's timeliness -- or lack of it. But I held off on making a stink about it. The reality is the Nobel Prize really doesn't mean much to the American people anymore, and it neither enhanced nor hurt Obama in his standing in public opinion polls.

It's another award that interests me. Assuming there still is a Time Magazine this coming year -- the publication is losing readership rapidly -- I have a nomination for the magazine's next "Person of the Year." I would nominate the American people.

With very little guidance and scant real help, millions of Americans have scurried about, trying to make the best they can in the biggest economic downturn of most of our lifetimes. They've proved that no matter what rhetoric we hear from the politicians, the virtues that have helped Americans through the past year have been individualism, self-reliance and the liberty that allows us to make our own choices about thing that matter.

For that we deserve a prize -- a collective "People of the Year."