Could Hillary Be Obama's RFK? 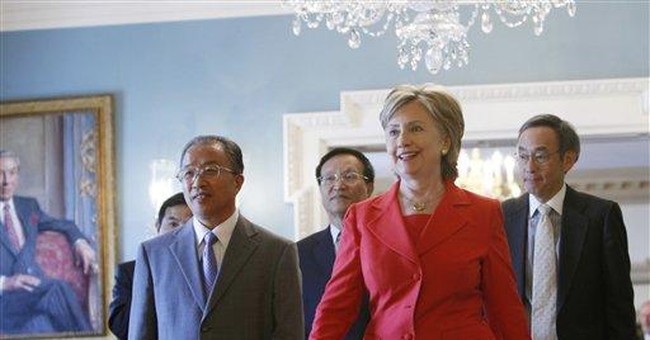 Several weeks ago, the press was full of stories that pointed out Secretary of State Hillary Clinton's absence from important international confabs. Even the most "mainstream" of publications suggested that America's real foreign policy was being forged from the same epicenter as healthcare reform, energy policy and virtually every other major initiative -- the White House.

Of course Secretary Clinton had suffered a nasty injury to her elbow not long ago, which could explain some of her absence from the limelight. And in recent days she has made major statements regarding both Iran and North Korea, and has picked up the pace of her international traveling.

So was the media just trying to make trouble when they suggested Clinton had been shunted aside? Not necessarily. To fully appreciate the delicate dance that remains the "Obama-Clinton Waltz," one must go back to another era -- that of Lyndon Johnson and Bobby Kennedy.

Some may remember that Robert Kennedy, who served as attorney general in President John Kennedy's administration, never got along very well with then-Vice President Lyndon Johnson. But what may have been forgotten is where the bad blood originated. Johnson fought Bobby Kennedy's brother for the 1960 Democratic nomination, right up to the Democratic convention. Does that sound familiar if we substitute the names Obama and Clinton?

After President Kennedy was assassinated in November 1963, Bobby came to be known in the press as "RFK." The initials suggested "JFK" and the days of Kennedy "Camelot."

Remember that Johnson resented Bobby Kennedy's often dismissive treatment of him while Johnson was vice president. So Johnson returned the favor once he became president. Not unlike many in the Obama camp, Johnson's advisers viewed the glow from the legacy of the late President Kennedy as following Bobby everywhere he went. At times this made the sitting president look like a tired Texas politician compared to the "rightful successor" to the Kennedy magic.

In much the same way, many advisers to Barack Obama have been averse to having Hillary Clinton, the wife of the Democrats' last political superstar, former President Bill Clinton, hovering in the cabinet room and showing up their man.

In both cases however, political expediency won out over raw emotions. Johnson, who would have loved to deep-six RFK's political career, instead begged him to stay on as attorney general after JFK was killed. While Bobby's heart was never completely in it, he rode out the term as attorney general under Johnson, finally escaping to run successfully for the position of U.S. senator from New York.

Johnson struggled over whether to work with RFK, or to try to stifle him so as to keep him from leveraging his cabinet role to gain higher office down the road -- maybe even Johnson's job as president.

Whether that was Bobby Kennedy's goal from the onset after the death of his brother is somewhat doubtful. But both Johnson and RFK knew that they had to dance with each other. Each needed the other to keep his own train running.

Johnson feared an immediate Bobby Kennedy challenge for the presidential nomination in 1964, and for good reason. When Kennedy introduced a film documenting the life of his brother at the '64 Democratic National Convention, he received a 22-minute standing ovation.

But Bobby Kennedy needed Johnson as well. Johnson had passed sweeping legislation and was broadly popular with the American public going into the '64 elections. RFK needed LBJ in order to win New York's Senate seat in a big way.

Most know that by late 1967, Vietnam had destroyed Johnson, and rumors of a Kennedy bid for the nomination for president were rampant. Johnson was basically forced out of the race by a too-narrow victory over Sen. Eugene McCarthy in the New Hampshire primary, and by a decision by Kennedy to run against him. An assassin's bullet ended any chance to see where history might have taken Bobby Kennedy.

The Clinton name remains a powerful one in national politics. Bill Clinton, who has been unusually quiet in recent months, ended his presidency having survived an impeachment trial. He also retained his high approval ratings.

Has Hillary been given the "RFK treatment"? It's possible. Has Obama -- a la Johnson -- moved to shore up his relationship with Secretary Clinton to avoid a potential rift? Likely.

Here's the key question: How long will this Obama-Clinton dance keep toe-tapping? What if Obama becomes wildly unpopular? Could Hillary move to reclaim the more moderate wing of the Democratic Party; the one that brought her husband such high poll numbers?

Both sides will deny it, but never say never. History has been known to repeat.