Can Charlie Crist Spread Some Sunshine on the National GOP? 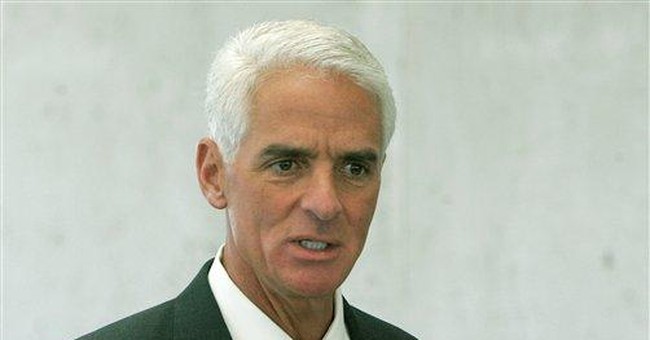 Recently, every pundit and columnist under the sun has opined as to whether the Republican Party is on life support and how it might emerge from its marginalized current status and become a viable national party once again.

Some are of the opinion that the party must go back to its hard-core conservative roots. Others argue for a more inclusive party -- the old "Big Tent" theory. Surely Republicans have learned from the rise and early days of Barack Obama's presidency that likeability of an individual is as, if not more, important to the average voter than positions on complicated issues.

Florida is a microcosm of America. Don't believe me? Just look at how Florida has voted in recent elections. Besides literally deciding the 2000 presidential contest, this seemingly overwhelmingly Republican state has shown that it will reject a Democrat who is less than appealing -- such as John Kerry in 2004, but will give its electoral votes to a fresh face like Barack Obama just four years later.

That's why pragmatic Republicans who actually want to see their party return to power at some point need to become acquainted with the name Charlie Crist, who announced this week that he will seek an open U.S. Senate seat in 2010 rather than run for reelection as governor.

Perhaps more than any philosophical shift, the GOP needs a leader who seems capable of appearing approachable by the public and at ease with the media. Crist has those qualities. He easily takes phone calls on his personal cell phone from friends and actually can have a conversation with a columnist or author who writes about him without trying to "straighten them out" on something they may write about him. Barack Obama is known for his breezy and cool style both with the public and media. But even President Obama has nothing on Charlie Crist.

Now the fact that, in my business, I talk to political leaders doesn't cloud my judgment. While Crist is highly popular in Florida and will likely cruise to victory in his bid to go to Washington, the fact is that the most conservative wing of the GOP in the state isn't wild about him. Some view him as an elected official who has difficulty taking a stand on tough issues and who sometimes works with "the enemy" by appointing moderates, even borderline liberals, to key statewide positions.

But Gov. Crist, with his silver hair and stunning tan, has a unique ability to dance between the raindrops. While most governors get the big head in their first four years, Crist has taken the exact opposite approach. He is respectful to not just the powerful, but almost sheepishly kind to average citizens who might easily run into him in the capital city of Tallahassee, in St. Petersburg, where he keeps his boat, or in South Florida, where the newly married governor and his bride often visit on weekends.

If the GOP comes to believe down the road that the answer to its prayers is the "anti-Bush," then Charlie Crist might be a Republican dream come true. It is well known among insiders that George W's brother, Jeb Bush, who served eight years as Florida's governor immediately prior to Crist, isn't wild about Crist. That's in part because Crist, after taking office, rapidly went about dismantling key elements of Jeb Bush's administration and replaced many of Bush's cronies with new faces. It's also because the GOP-dominated legislature, for the most part, considered Bush an arrogant bully and expressed their pleasure in having a new governor.

But what is most interesting is Crist's ability to move from one side of an issue to the other, yet never appear contradictory. If you consider this a bad trait, then you might want to rethink it as to its value in being successful in politics. Former Georgia Governor and Senator Zell Miller even earned the nickname "Zigzag Zell" for his many political twists and turns -- going from Bill Clinton's most important supporter in 1992 to keynote speaker at George W. Bush's second GOP convention. Miller held high approval ratings throughout his years in office.

Once he hits the more partisan ground of Washington there will be plenty of time for Charlie Crist to establish whatever political resume he may need. But, if elected to the Senate, he will undoubtedly be bringing to the "inside the Beltway crowd" a charisma and political talent that might just end up being exactly what the GOP needs … something called "likeability."

Trump Has His Eyes on 'One of the Highest Priorities' for Primary Races by Rebecca Downs
Townhall
'I'm done, I'm done working in Portland': Man beaten, hospitalized after driving through protest (graphic video)
Twitchy
Explosive New Info on Hunter Biden and His Chinese Dealings
Redstate
'I Thought I Was Going to Die' – Man Held at Gunpoint and Beaten by Portland's Antifa/BLM Terrorists Talks From Hospital Trauma Center
PJ Media