Here's a Bill in Congress Everyone Can Back: Investigate How We Got Into This Mess, and Do So Quickly 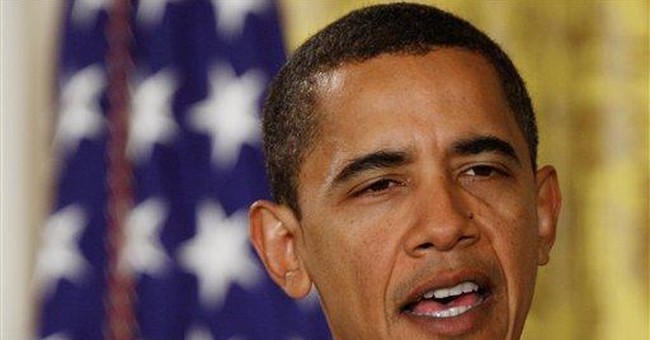 President Barack Obama is rolling the dice early into his presidency with a "stimulus" package that is burdened by the typical "throw everything but the kitchen sink into it" mentality that is the hallmark of the leadership in the U.S. House and Senate.

If Obama's proposal were truly an infrastructure program that could hit the ground running, it would be receiving the bipartisan support that he is seeking. But with friends like Nancy Pelosi and Harry Reid, the new president doesn't need enemies.

They loaded up the bill with money for every possible constituency -- teachers unions, environmental activists, and all sorts of groups whose members receiving cash infusions might not result in the creation of many, if any, new jobs.

So, clearly, the stimulus package will not receive much, if any, Republican support. It may, if it turns out to be the boondoggle it seems, turn out to be a future political disaster for moderate Democratic members of Congress.

But there is a proposed piece of legislation that everyone can support and which should be passed as quickly as possible. Sen. Kent Conrad, D-N.D., and Sen. Johnny Isakson, R-Ga., have proposed legislation to create a "Financial Markets Commission" charged to investigate every aspect of how our nation's financial institutions ended up losing tens of trillions of dollars. This is legislation that should become law immediately with the commission appointed and put to work in no time flat.

The incredible hubris that we have seen coming from the top leaders of many of these financial institutions -- ranging from jets that were ordered after bailout money was received, to big bonuses paid out at the last minute to employees of institutions that had already been reduced to corporate beggars -- tells us that this is one commission that really needs to get to work.

And it should not simply be a dry report to be presented and forgotten a week later. We need to take names and kick rear ends. And, if in the course of the commission's investigation, they uncover wrongdoing, then their findings should immediately be forwarded to the proper legal authorities. There is little doubt New York's Attorney General Andrew Cuomo, who has shown no hesitation to take on those who wrecklessly played games with America's economy, would love to get his hooks into any and all offenders.

What's more important than understanding who played fast and loose over the past decade or so is who is continuing to play fast and loose, despite bailouts and a public mood that justifiably has turned surly. One would hope the proposal from Isakson and Conrad would allow for the commission to investigate ongoing behavior by the financial institutions -- particularly those who have taken our tax dollars to keep their organizations afloat.

It would be easy to say that when the nation is on the verge of, or perhaps already into, the modern definition of a depression, that playing "who shot John?" is of little use. But wait a minute. Wasn't there an outcry from Democrats and many Republicans who wanted a 9/11 commission to study how America reached the point that it could be so vulnerable and how the Bush administration handled the crisis? In this current instance, the "attack" is still ongoing. We need answers, and those holding out their hands for bailouts and assistance need to know that someone with the necessary resources and authority is looking at their every move.

It will take time, no matter how quickly President Obama claims, for any money from any stimulus package to truly impact the economy. During that time period, we could swiftly begin hauling people before a commission that has broad investigative authority and start to sort out those who are the swindlers versus those who are the morons.

We not only need this commission to understand how to avoid future mistakes, we need it to find out who should be slapped into a jail cell for betraying the trust of the public and destroying our economic foundation. Yes, there is plenty of blame for the general public in any investigation. But the average citizen is already feeling the heat -- lost jobs, lost homes and just plain fear.

Now it's time to get to the ones who really set this mess up. And, in the process, let them know that someone will continue to be watching them.