Don't Give Caroline Kennedy a "Bailout" 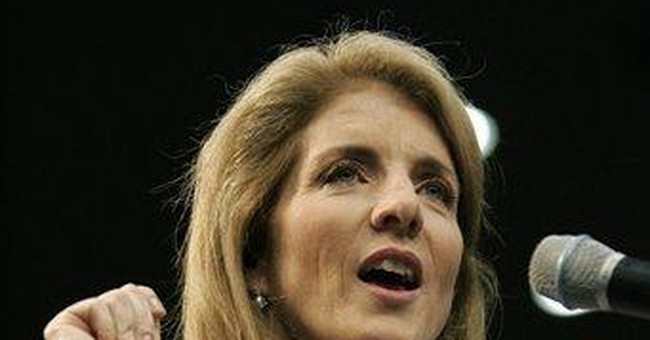 We saw what happened when the mighty and powerful captains of Wall Street and the big banks asked for a giant blank check from Congress. What was promised to be a stimulus to our economy turned out to be a money grab in which the banks can't or won't tell us how they are using the money. They aren't making loans; they aren't assisting families or small businesses. They've turned out to be arrogant parasites.

Now we're getting the political equivalent of this with Caroline Kennedy, the lone surviving member of the family of John F. Kennedy. She has the audacity to come down off her lofty perch to essentially stage a public campaign to persuade New York Gov. David Paterson to appoint -- make that anoint -- her to the United States Senate. Sure thing.

Let me give you the real lowdown on why the forever super-private Ms. Kennedy suddenly believes this seat should be hers. She thinks it is indirect payback time.

In my book "Paranoid Nation: The Real Story of The 2008 Fight For The Presidency," I outline specifically why the Kennedy family first thought that they would encourage Barack Obama to run in 2008; not because they thought he could win, but because they thought he would take a good portion of the African-American vote away from Hillary Clinton in early essential primaries such as South Carolina. That would give another of their Northeast U.S. Senate buddies -- la John Kerry in 2004 -- a shot at winning the White House. But neither Sens. Chris Dodd nor Joe Biden, both longtime cronies of Sen. Edward Kennedy, ever could get to first base in the 2008 race. Biden got to settle for the vice presidency.

When Obama won the Iowa caucus, all bets were off. So Caroline and her uncle Ted rushed to openly endorse Obama. The Kennedy saw their best and brightest chance to knock Clinton off, thereby allowing the Kennedys to remain just slightly higher royalty than the Clintons within the national Democratic Party.

Label nave anyone who thinks Bill or Hillary Clinton is overjoyed at the thought of Caroline Kennedy being a senator. Remember that Kennedy served on Obama's vice-presidential selection committee, which never seriously considered Hillary Clinton. But now that Clinton is a top member of the Obama cabinet, she'll be expected to keep quiet and allow the coronation process for Sen. Caroline to continue apace.

In my own considerable hands-on political experience at state and national levels, I would never have dreamed of considering myself worthy to wage an open campaign to have a sitting governor name me to replace a departing U.S. senator.

And like many of you, I have busted my rear end working day and night to provide jobs for employees and to earn an honest day's living. So let me speak for just about everyone I know.

Listen, princess: You have no business in the Senate. Zero. And this has nothing to do with gender. Geraldine Ferraro, who busted her butt to learn the ropes in Congress before Walter Mondale made her the first female nominee for vice president, recently said pretty much the same thing in a kind way.

I have nothing against Caroline Kennedy. She seems bright, and her work on the issue of privacy I greatly admire. But that's it. The fact that her father is a beloved slain president, or that her mother was the essence of grace and beauty as first lady, has nothing to do with Caroline's qualifications, or lack thereof. Sarah Palin, who has been a mayor and governor, is far more qualified for high office than Kennedy, and yet the press scoffed at her.

And let me debunk the myth that Kennedy should be appointed because "she's the only one who can raise the money to run again in two years." Whoever says that doesn't understand the power of incumbency, nor the ability for the Democratic Senatorial Committee to reelect the likes of say, an Andrew Cuomo, who is truly qualified for the post.

We have clearly reached the point at which America's elite, be they political or financial, have decided that what they can't earn should be handed to them.

I say no political bailout for Caroline. Let her do what the rest of us current or former politicians have had to do -- ride a thousand miles, shake countless hands, feel the sting of defeat and only then the joy of victory. By earning it.