Democrats Would Have Been Smart To Skip Convention 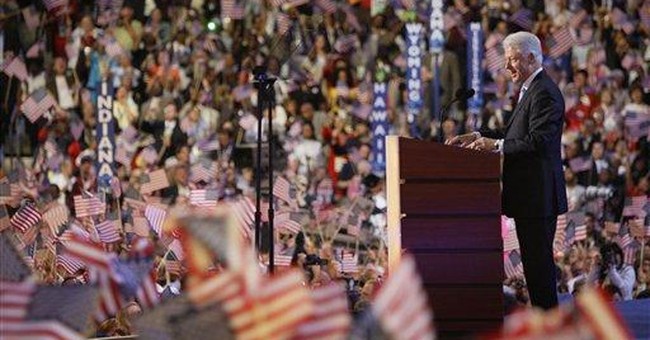 Democrats were scratching their heads and trying to figure how it was that Republican presidential nominee John McCain had inched further up in the polls during this, of all things, the week of the Democratic National Convention in Denver. But the only real mystery is why they were so mystified.

The Democrats' first misstep came on the first night of the proceedings, when they staged a disjointed and misguided salute to the party's most liberal wing.

It's always heartbreaking to see anybody suffering from cancer; in this case, Democratic icon U.S. Sen. Ted Kennedy of Massachusetts, who spoke to an adoring convention crowd. And yet it's Kennedy who typifies to many swing voters the very "limousine liberal" wing of the party that has for so long repelled voters from throwing in with the Dems.

The introduction of Kennedy by his famous niece Caroline Kennedy didn't help matters. She has no significant political experience, as was evidenced when the steering committee that she chaired steered Sen. Joe Biden, a Kennedy crony, onto the presidential ticket as Barack Obama's running mate.

Next came Michelle Obama's speech. She looked svelte and sounded smart. Yet her appearance came across as overly staged, and kept alive lingering doubts among some voters as to her true feelings towards those who don't march in liberal lockstep with her.

The fact is that the Democrats on Monday night didn't offer to America a coherent message that was palatable and digestible.

Nor did they on Tuesday, which only left the country wondering: Why did Obama pick another northeastern liberal male as his running mate when he could have chosen Hillary Clinton? She absolutely blew the convention hall away with a speech that had power and -- surprise! -- a discussion of meaty issues.

Now Obama has "a third running mate," whether he wants her or not. Sen. Clinton has more charisma and substance in her little finger than Biden has in his entire body.

Now we know why the Obama team decided to move their candidate's nomination acceptance speech to a giant stadium filled with tens of thousands of screaming fans. Having to follow Hillary and Bill Clinton in the same venue in which they appeared might lead to apple-to-apple comparisons that could leave Obama's fruit looking bruised.

Instead of all this, the Democrats should have been reassuring moderate voters that they will be safe this November if they abandon their recent past habit of voting for the Republican nominees for president because the Democrats' pie-in-the-sky solutions are too flighty and unrealistic.

Instead, one has the strange feeling that today's Democratic Party is looping back to the loopy days of, say, 1972 and George McGovern, rather than to the days of moderates Jimmy Carter in 1976 and Bill Clinton in 1992.

This was a convention that made a quick tip of the hat to Carter, then a homage to Ted Kennedy, and then a showcase of the Clintons as the commonsensible brains of the party.

Ironically -- or perhaps predictably in politics -- those three legacy families can't stand one another. Carter got the bum's rush Monday night, but then got even when he pointedly reminded his Georgia delegation at a Wednesday breakfast that Ted Kennedy essentially destroyed Carter's reelection in 1980. That's when, after failing to take the nomination away from Carter, Kennedy barely mustered the obligatory dignity to shake then-President Carter's hand on the podium as the convention wound down.

Neither the Carters not the Kennedys are pals with the Clintons. Ted and Caroline helped torpedo Hillary's campaign this year. And Carter declared in a recent interview that every member of his family has supported Obama, except for one, who supported John Edwards. But none went for Hillary.

And poor Obama. The man who has seemed lost in the wilderness for the past month now found himself unable to correctly identify the city from which he spoke via satellite to his wife and children on Monday night.

Things can turn on a dime, of course. As the Democrats were busy trying to appear unified and on message this past week, anxious Republicans were fearfully eyeing the possibility of a major hurricane hitting the Gulf Coast just when their own nominating extravaganza was preparing to gas up its first red balloons.

Another fine performance by the Bush administration like the one in response to Katrina, and it will probably make no difference how badly the first nights of the Democratic convention went. The Democrats could simply stand on the sidelines and wait for victory in November.

It's going to take a miracle of some kind if Obama is going to be able to transform the early events of the 2008 Democratic convention into anything more than another reason to stop holding these things altogether. Especially if they boost the opposition party in the polls.