Will McCain Be Given The Bob Dole Treatment? 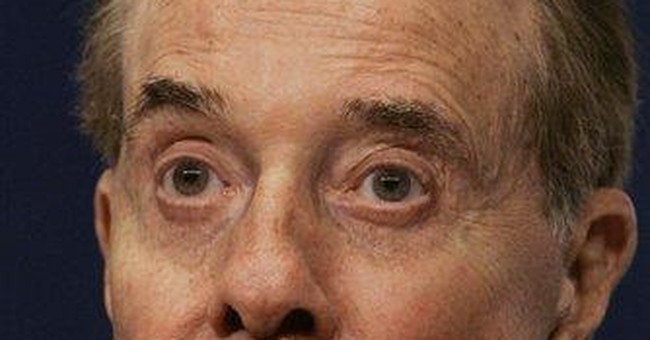 As Hillary Clinton starts to fade away, or so it appears, John McCain faces both new obstacles and opportunities in his quest for the White House. The question is, will he be "helped" in the same way Bob Dole was in 1996?

Dole was one of the better nominees the GOP has put forth in modern times. He was (and is) bright, witty, conservative and independent.

Oops. Did I say independent? That was his problem.

The Republican establishment generally doesn't like independence. President George H.W. Bush could barely stand Newt Gingrich in Gingrich's pre-Speaker years as House GOP Whip. Gingrich was far too independent in his thinking and too "out there" in his style.

And, I must admit, Gingrich's decision to stare down Bill Clinton over the federal budget in 1995, leading to the so-called "shutdown" of government, drew negative reviews by the general public. Never mind that the reaction to the shutdown was mainly because the media grossly misportrayed it.

As Gingrich's popularity dropped, the Democrats very smartly decided to run TV ads in the late winter of 1996 that linked Bob Dole to Newt Gingrich. The ads were destroying Dole in the presidential race, but GOP leaders claimed there was no money available to counter the attacks.

Sure there wasn't. The truth is that Dole got a lot of halfhearted lip service from many establishment Republicans, who had no real desire to see him occupy the White House.

Why? Because they knew they couldn't control him. They also had another candidate in mind for the Oval Office; one who needed more time to earn credibility as one who could govern. His name was George W. Bush.

I witnessed firsthand the halfhearted effort to make Bob Dole little more than a token candidate in 1996. It was a complete shame. The man deserved better.

So now we come to John McCain. He's known to be a bit testy behind the scenes, but he's also very bright and witty, and has running through him a wide streak of independence.

Oops. Here we go again. It's that independence thing.

Looking over the events of the last month, a time in which John McCain has known he has the GOP nomination in hand, I've observed several things.

For one, there has been a push to bring "the big boys" into the McCain strategic camp. That always happens. The same old gang that has run things forever wants their team of strategists to be a "part of the team." And the outsider, McCain, feels grateful to have their support, so he gladly accepts the offer.

Sometimes that's good, most times it's not.

Here's an example of what I mean. Just this past week, in addressing the economic woes facing our nation, Sen. McCain praised the Fed's intervention to save the massive investment bank Bear Stearns. But in the same speech, he decried any effort to assist, in any real manner, those who are in dire straits over the drop in home values and the subsequent credit crunch. Now that sounds pretty conservative: Saying to people "you made your bed, now go lie in it."

But hold on. How can you be in favor of pumping many billions of dollars into a presumably sophisticated institution such as Bear Stearns, ignoring their bad judgment, but then say that there should be no government action to give relief to individuals and families who made similar bad decisions? These are families without the accountants, lawyers, analysts and highly paid business leaders that Bear Stearns had at its disposal.

No one is for big government bailouts. But once you start opening the cookie jar to help Wall Street firms, where people make great fortunes, how do you then stare into the eyes of a family facing foreclosure on their home and say "too bad"?

And by the way, most of the people hurting in this economy are folks who would otherwise be predisposed to vote for a Republican candidate.

Everyone knows that John McCain can take some pretty hard-line positions. Maybe this was meant to demonstrate his straight-talk intestinal fortitude.

But my guess is that some of those veteran GOP strategists know that McCain's position on foreclosures will make him more vulnerable in the Sunbelt and other "growth" states where the GOP base has grown.

I have to wonder if the Republican establishment is "helping" John McCain by staying quiet and allowing him to destroy his chances early on; whether it "helped" him develop this woeful new economic strategy for his campaign.

It's not a matter of sticking to "conservative guns" when you apply one set of liberal rules to large wealthy institutions but tell the suffering voters in essence that "you made your own mess. So eat a little less and find a warm shelter in which to ride this thing out." Policies like that will make Barack Obama president.

Hey, John: Give Bob Dole a call and ask him whom to trust. He's the most honest guy you will hear from in this election season.