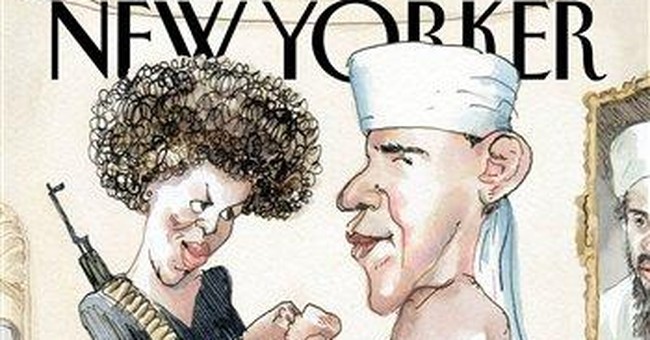 First they went after Saturday Night Live. Then Jon Stewart got blasted. Now left-wing blogs are attacking the New Yorker for satirizing Barack Obama and his critics on the cover of their most recent issue.

The front-page illustration, titled The Politics of Fear, features a robed, turbaned, and conspicuously Muslim Barack Obama fist-bumping a 1960s Black Panther caricature of his wife, who is armed with a machine gun slung across her back and an enormous afro. In the background is the Oval Office, complete with a mantle displaying a picture of Osama bin Laden and an American flag smoldering in the fire.

The sketch is meant more to satirize conservative stereotypes of Obama than to make a statement about the candidate himself, according to New Yorker illustrator Barry Blitt.

But many liberal blogs attacked the picture Monday, arguing that portraying Obama in such a way is offensive and unacceptable, regardless of any ironic intentions.

John Nichols, blogging for The Nation magazine, agreed. “Unfortunately, most Americans won't be underlining passages from political articles this week. … As such, the cover itself, and the over-the-top discourse it will inspire, will probably do more to reinforce rather than challenge the smears.”

Liberal blogs have been taking particular umbrage to any satirical barbs aimed at Obama recently, regardless of how gentle the jab and how friendly the source.

Saturday Night Live faced blogosphere criticism after it aired several sketches that mocked Obama and showed sympathy to Senator Hillary Clinton during the Democratic primaries – including a debate parody with adoring CNN moderators fawning over Obama and a fake commercial in which a clueless Obama is faced with a crisis and calls Clinton at 3 am to plead for advice.

“Perhaps SNL thinks it funny to run the swiftboat-like attacks against the candidate most favored by their most coveted 18-49 year old, college educate [sic] viewers, while not running similar attack skits against Hillary Clinton or John McCain.  However, I for one believe it is a thinly veiled attempt to influence the election,” wrote blogger Number 8 of the Daily Kos.

Reliably left-wing comedian Jon Stewart faced similar tut-tutting from the web after he did a segment highlighting Obama’s change of position on accepting public financing.

“The [Daily Show] producers should be careful when poking fun at Obama not to provide fuel for the right-wing slime machine. Poke fun at Obama all you want, but do it in a way that also reveals the Republicans' mendacity and hypocrisy,” wrote Joseph A. Palermo for The Huffington Post.

Palermo accused The Daily Show of playing into the “Republican line” and warned that the media had a responsibility not to help enable conservatives during the election.

“Yeah, that means you Jon Stewart,” he added.

The Obama campaign has generally refrained from commenting on media attacks, although a spokesperson did call the New Yorker cover “tasteless and offensive.”

Feminist Writer Finally Says the Quiet Part Out Loud Regarding Abortion
Townhall
Kick-butt thread directed at Lefties threatening violence over SCOTUS decisions an EPIC must-read
Twitchy
Joe Biden Just Told Us Who He Really Is
Redstate
Could AOC Be Getting a Little 'Insurrectiony' With Her New Revolutionary Friend?
PJ Media