The Texas Legacy of Rick Perry 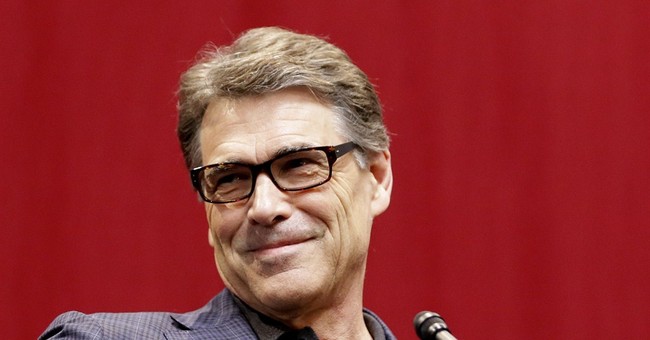 James Richard Perry has been governor of Texas longer than Franklin Delano Roosevelt was president of the United States. When he leaves office on Jan. 20, Perry will leave as the longest serving governor in the history of this state.

So assessing his legacy is both important and time-consuming.

I have not always been a Perry fan. From 2007-2009 I served as press secretary for former U.S. Sen. Kay Bailey Hutchison, and many on her team did not view Perry favorably. But I returned home to Austin soon after, and I saw for myself what good shape our state was in.

Perry is political survivor. He survived switching parties in 1990, survived the 1990 election (when Ann Richards won the governor's office), survived a tight lieutenant governor's race in 1998 against his college friend John Sharp, and won three races for governor of his own in 2002, 2006 and 2010. He survived - and thrived - in the tea party revolution of 2009-2010. He is now trying to survive a nearly unprecedented felony indictment over a veto threat. His political career has been simply remarkable.

Perry also presided over the strongest economy in the country over a decade, at a time when his state's economy was expanding as fast as any state in recent memory. When he leaves office, Texas will have an unemployment rate below 5 percent, which economists consider "full employment." According to the Bureau of Labor Statistics, Texas has created approximately 2 million jobs in the past decade. Their labor force participation has grown from 11 million in January 2004 to over 13 million last month. The Texas economy is stronger and more diversified than at any time in its history, and the Perry approach of low taxes, low spending and predictable regulation has worked.

Perry has been one of the strongest pro-life governors in the state's history, signing the sonogram law, laws requiring parental notification and parental consent, laws banning the use of tax dollars for abortion procedures, a law defunding Planned Parenthood, and in 2013 a law that required abortion facilities to upgrade their level of care and outlawed abortions after five months.

Perry has unabashedly supported tort reform in Texas, signing comprehensive tort reform in 2003 and then building on it with additional legislation in 2005, 2007, 2011 and 2013, with medical malpractice reform bringing specialists back in underserved areas like South Texas.

Sure, he's made mistakes. He's admitted that the HPV vaccine executive order was an error, that it should have been opt-in rather than opt-out. The proposed use of eminent domain in the Trans-Texas Corridor raised the ire of many, and the plan ultimately failed.

Critics raise cronyism allegations, but Perry has always been a loyal boss. After 14 years in office, he has accumulated a long list of former staff.

Challenges remain for his successor: transportation, water and education, among others. But those challenges are largely due to the enormous population growth that the state has experienced.

In sum, Perry's longevity and political acumen helped him take a fairly weak constitutional office and turn it into a strong one.

In the aftermath of his 2012 presidential flameout, he has quietly studied policy issues, traveled internationally and rebuilt his political organization, all with an eye toward running again in 2016.

Apart from the historical record, I've often tried to evaluate Perry personally. He is shrewd, confident, likable and many other things. But one story that I was told by one of his aides really says it all.

Early in the Republican presidential primary in 2012, there was a televised debate. The candidates were seated around a table. As the debate unfolded, many of the candidates were furiously writing down notes, to remind themselves of a point they wanted to make. One candidate, former U.S. Sen. Rick Santorum of Pennsylvania, noticed that Perry wasn't writing very much. Through the course of the debate, Santorum told the story of the tremendous health challenges that his daughter Bella, who suffers from a rare disease, had faced through her life. It was a touching story. As the debate ended, the candidates stood up and shook hands. Santorum walked over to Perry and glanced down at his paper and saw just three words: Pray for Bella.