On Capitol Hill, A Fight for the Soul of the Republican Party 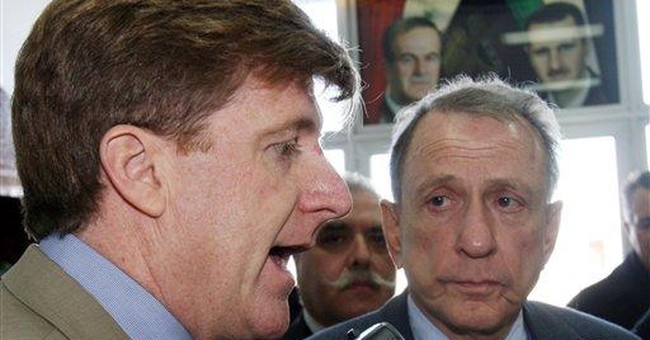 Early next week, Republicans in Congress face a decision that will say much about the party’s future direction on spending discipline.

The Appropriations Committee controls the spending levers for most of the federal government. And too often, both parties abuse that power to insert “earmarks” that divert your tax dollars to special interest projects. In recent years, these earmarks have included millions to build a rainforest in Iowa and the famous “bridge to nowhere” in Alaska.

In 2006, the American people showed that, when given a choice between Democrats and Republicans who act like Democrats, they will pick the Democrats. The Republican Party needs to return to its fiscally responsible roots in order to regain public trust on this key issue. Sometimes, you need to shake up business-as-usual in order to make real change.

That’s where Congressman Jeff Flake comes into the picture. Rep. Flake, a Republican from Arizona, is a close ally of fiscal conservatives who has made a name for himself on Capitol Hill for his stalwart stand against the practice of earmarking. He consistently puts the spotlight on pork spending in his weekly “Egregious Earmark” press releases and in frequent speeches on the House floor. Last year, he offered dozens of floor amendments to strike funding for some of the most abusive earmarks.

Jeff Flake is serious about reining in spending and has done a heroic job fighting waste. But he can do even more by attacking the issue at its choke-point from inside the Appropriations Committee.

The earmarks process is deliberately complicated and difficult to monitor. Members of Congress who are not on the Appropriations Committee have little time to even review them. For example, the “omnibus” appropriations bill passed last month contained more than 8,000 earmarks spread over 3,417 pages, and most Members of Congress had only 22 hours to read it before the vote.

Appointing Jeff Flake to Appropriations would give taxpayers a seat at the spending table and provide an early warning system against abusive earmarks. The committee spot will provide Rep. Flake’s team with critical new staff resources and early access to the text of spending bills. Simply having him on the committee would provide a major deterrent effect against some of the worst abuses. After all, as we saw in vote after vote last year, it is very tough to kill earmarks once they are placed in a bill. Most important, perhaps, is that Rep. Flake’s appointment would make a major statement to the American people that the Republican Party is returning to first principles, such as bringing transparency and accountability to Congressional spending.

No doubt, Minority Leader John Boehner is working hard to convince all of his fellow Republicans that returning to limited government principles is the way to regain the trust of the American voting public. But we need your help to push this through.

FreedomWorks is organizing a campaign web site at www.MakeitFlake.com. Our allies, including the Club for Growth, the National Taxpayers’ Union, and others, are all calling on GOP leaders to appoint Rep. Flake to the Appropriations Committee. We have already generated thousands of phone calls and emails to the Republican leadership. We are hearing that the calls are making a difference, but we need your help. Please join us and make your voice heard as well.

This is a powerful opportunity for the Republican Leadership now in Congress to prove they are serious about returning to an agenda of conservative economic, limited government principle.

Leader Boehner together with members of the Republican Steering Committee—specifically Roy Blunt (R-7, MO), Eric Cantor (R-7, VA), John Carter (R-31, TX), and Adam Putnam (R-12, FL)-- will ultimately decide who fills the current vacancy on the Appropriations Committee. Contact them today and let them know Jeff Flake is the right man for the job.

Most Republicans understand the need to return to the party’s optimistic, responsible, limited-government principles. The danger is that some in the party are comfortable returning to the “permanent minority” status Republicans had in Congress for much of the late 20th century. Before 1994, too many Republicans were content to simply go along with a big-spending Democrat majority, just as long as they got some table scraps.

Putting Rep. Jeff Flake on the Appropriations Committee is a good step towards avoiding a return that kind of complacency, and will be a major step towards restoring the Republican brand on government spending.