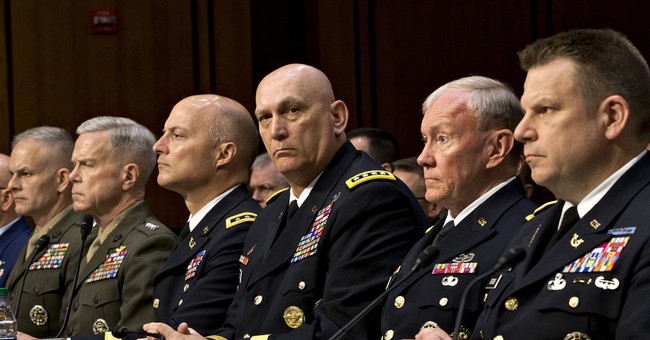 Over the weekend, the Chairman of the Joint Chiefs of Staff General Martin Dempsey announced the Pentagon is working on a budget plan that starts to curb spending on military pay and benefits.

This is not the first time a military leader has noted the pressure rising personnel costs is putting on defense budgets. Former DOD Secretary Robert Gates warned that health care costs were “eating the Defense Department alive.” His successor, Leon Panetta, advised that the “growth in personnel costs is on an unsustainable course.” Defense Secretary Chuck Hagel has also recently noted the dire need for entitlement reform.

With the national debate on health care reaching fever pitch in the wake of Obamacare’s shaky rollout, the Pentagon can hardly pretend its own outworn benefits structure will survive unreformed. However, tackling the political third rail of military benefits is a fool’s errand so long as defense budgets remain plump with wasteful industrial spending.

The politics behind cutting the defense budget are not new. But the bets are now being made with real money; Dempsey pointed out that unless compensation spending is addressed, resources for developing weapons systems and training will be insufficient.

The growing chorus on military entitlement reform comes as the department tries to find room for the discretionary cuts required by sequester. These budget constraints require appropriators to finally start placing real security priorities above political ones. As long as defense budgets are harboring wasteful spending, both the promises made to our troops and the nation's military readiness are at stake.

Lawmakers should start first with ending the practice of authorizing programs military officials have repeatedly renounced. One such program is the Medium Extended Air Defense System, or MEADS, which the United States has spent billions developing though it never intends to actually buy and use the system.

Instead, the MEADS program is a giveaway to European “partners” who contracted with the United States to develop the missile program, but have provided far less financial backing for the project. With the United States’ involvement scheduled to draw to a close this year, taxpayers are still being soaked for public relations events staged as tests; earlier this month MEADS spent millions of dollars on a flight test designed to mask the program’s long history of technical shortcomings.

Much like the long-standing entitlement threat, the special protection MEADS has garnered amongst its few remaining congressional allies is not a recent development. In fact, despite receiving funding for nearly two decades, the program has yet to produce a missile that has passed all the same Army tests as the updated, much more cost-efficient Patriot missile. This delinquency all for the bargain price of more than $2 billion more than was originally estimated.

Lawmakers from both sides of the aisle have admitted the country can hardly afford to throw more money into the MEADS black hole. Top Army brass has protested prolonging the program. The only obstacle to zeroing out this kind of waste remains politicians for whom this decades-old earmark is a testament to skillful Washington back-scratching.

Another round of sequester cuts are scheduled to take place in January, and the Defense Department needs to start identifying how the budget can be trimmed. The durable reforms Dempsey mentioned won’t be revealed until next year’s budget is introduced, and won't count against the Department’s sequester obligation. That leaves the political class’s hallowed weapons projects on the chopping block. MEADS should be the first to go.