Matthew Glans
|
Posted: May 10, 2018 12:01 AM
Share   Tweet
The opinions expressed by columnists are their own and do not necessarily represent the views of Townhall.com. 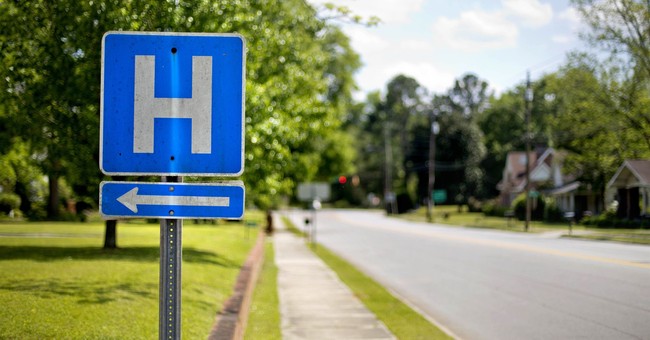 This week is National Hospital Week, which is as good a time as ever to examine certificate of need (CON) laws, one of the biggest obstructions facing new hospitals, hospital expansion, and access to quality health care.

In all industries, competition improves services and lowers costs because the presence of additional product or service providers creates innovation and gives consumers additional choices. Despite the wealth of evidence proving free-market principles benefit everyone in society, many states continue to hinder competition in health care. One of the most effective ways to do this is through an arduous regulatory process known as a certificate of need (CON). Currently, 35 states use CON laws to limit the ability of health care providers to expand their businesses.

Under a CON law regime, states require a certificate of need for a wide variety of expenditures, such as facility construction and modification, new medical procedures offered, and increased inpatient care beds. States with CON programs regulate on average 14 different medical services, devices, and procedures.

Recent studies show CON laws fail to achieve many of their stated goals and increase costs for consumers by preventing competition, thus forcing providers to use older facilities and equipment.

Ample research demonstrates CON laws drive up health care costs, which are on average 11 percent higher in CON states than in non-CON states, according to data from the Kaiser Family Foundation. Kaiser also found a positive correlation between the number of CON law restrictions and the cost of health care. States requiring certificates of need on 10 or more services averaged per capita health care costs 8 percent higher than the $6,837 average for states requiring certificates of need for fewer than 10 services.

Furthermore, health care quality measures were significantly lower across nine different indicators in CON states compared to states without CON laws, according to a study by Thomas Stratmann and David Wille of the Mercatus Center at George Mason University. One of the biggest discrepancies identified is the difference in the mortality rate resulting from complications in hospitals. In CON states, the mortality rate was about 5 percent higher than the average rate in non-CON states.

Such laws limiting competition are designed to prevent what supporters call “cherry picking” or “cream skimming,” a scenario in which hospital substitutes such as ASCs will accept only the more-profitable and well-insured patients, leaving general hospitals with the less-profitable and uninsured patients. Currently, 26 states regulate the entry of hospital substitutes through their CON programs.

CON laws also give undue influence to competitors during vetting processes. When a health care company applies to enter a new market, competitors often use the CON process to block potential competition. CON laws are a barrier to entry and raise the price of medical care by preventing new medical providers from competing with existing hospitals, thereby eliminating important market forces.

Instead of resorting to crony capitalism and indulging certain providers with special treatment, states should open up the market by rolling back or, better yet, outright repealing CON laws. Eliminating unnecessary barriers to the health care market such as CON laws would unleash competition, thus producing myriad choices and innovations that will benefit all health care consumers.

Absent CON laws, more medical facilities will be built and additional procedures will be offered, allowing new and existing patient services to be met in a convenient, reliable, affordable, and timely manner. Repealing CON laws sounds like a no-brainer—hopefully, state lawmakers come to the same conclusion.