Matthew Betley
|
Posted: Jan 24, 2022 12:01 AM
Share   Tweet
The opinions expressed by columnists are their own and do not necessarily represent the views of Townhall.com. 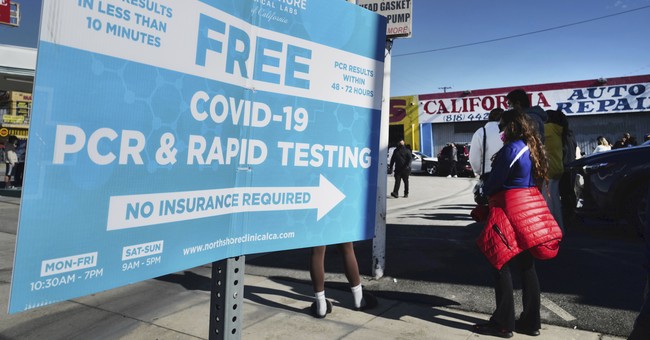 While that title sounds like a Robert Ludlum novel, it’s actually the confusion I encountered just before and after I recovered last week from my second round of COVID. My first fight with delta – which I wrote about here 3 months ago – was much more serious, affecting my lungs and requiring the monoclonal antibody infusion, when Regeneron still worked for COVID. Omicron, on the other hand, was a super-mild cold that lasted 3 days. But the real kicker was how little doctors, pharmacists, and other medical professionals understood about the booster, immunity, and testing when it comes to the latest, raging, contagious variant.

When I first recovered from delta (with issues that I’m still dealing with everyday thanks to lung damage from Iraq from toxic exposure to burn pits), I read multiple medical journals. From what I gathered, I had natural immunity for 9 to 15 months, with conservative estimates at 6 months. I thought the same thing applied to my kids, who contracted delta from me. And while I’d been vaccinated last March with Moderna, I couldn’t get the booster until 90 days after the monoclonal antibody infusion. And then omicron hit.

I read more medical journals and studies that indicated hybrid immunity from both natural infection and a vaccine or booster was the best protection against omicron. One of my doctors at Hopkins thought I should get the booster after the 90 days, while another of my doctors thought I should be fine for up to 6 months. I’d also had my blood work done recently, and my antibody level exceeded 2500 – the maximum limit measurable – on the Roche test, which any Labcorp will do upon request. After weighing my choices, I – not anyone else – made the decision to get the Moderna booster. The pharmacist who administered it said, “It can’t hurt, but no one really knows anything about this variant,” and as a Marine, I’m all about the ready-fire-aim philosophy.

I had zero side effects other than a sore arm, but the following week, after a sporting event, I tested positive on a PCR on Thursday, the day after one of my kids tested positive. All of my rapid tests that week had been negative, including the day AFTER the PCR test. When I asked about the inconsistency, the facility that administers the tests admitted the rapid tests are completely unreliable when it comes to omicron. Some people test negative on the rapid; some, positive; and even others not positive until they’re almost fully recovered. But it’s the PCR that is the real indicator of infection.

From Friday to Monday, I had super-mild symptoms, although there was no doubt I had COVID, as it triggered my Eustachian tube dysfunction, my reactive airway disease cough (Thanks, Iraq!), and made my shower gel smell like plastic. By Monday, I felt pretty much back to normal, with just the lingering cough. I tested negative that day on a PCR, which shocked me, having cleared the virus that fast. However, my doctors assured me that whatever natural immunity/antibody protection I had must’ve done its job and knocked it out of my system quickly.

The most entertaining part of COVID 2 was the series of update tweets I put on Twitter, which is a bastion of vast medical geniuses eager to provide their expert opinions. My favorite ones were the people who are convinced that the booster somehow suppressed my immune system and made me susceptible to omicron. After kindly telling these Holiday-Inn-Express doctors to mind their own business, I went down the Google rabbit hole, and nowhere could I find anything to support that claim.

Instead, based on my doctors that I trust, my experience, and the research that I did, I reached the following conclusions: 1) the vaccines are therapeutics and do NOT prevent transmission. Based on hospitalization and death rates of vaccinated versus unvaccinated, I do believe they prevent severe disease, hospitalization, and death. 2) Omicron is so contagious it doesn’t matter whether you’ve been vaccinated or have natural immunity. I said last year that at some point, we’re all going to get a version of it, unless you’re one of the lucky ones that can’t get it because of some innate immunity. 3) Natural or vaccine-induced immunity minimizes the symptoms and duration. As it was with me, it was the same for my kid. Our bodies recognized the virus quickly, fought it, and knocked it out, pure and simple. 4) Cloth masks are worthless. Everyone pretty much agrees on this one by now, but yet our schools and politicians insist on mask mandates that have no actual value other than to hurt our children, especially younger ones. This one infuriates me because we’re two years into a pandemic which is close to being endemic. And 5) the ONLY people you should be listening to are your doctors, family members, and yourself. Don’t listen to me and especially don’t listen to unknown experts on Twitter.

While omicron is on the decline, there is no doubt there’ll be another variant, and if previous pandemics are indicators, it will likely be less severe with each iteration. (The cynic in me wonders if it will be just in time for the 2022 midterms.) But the real point is that we as a society have to say enough is enough, accept the risks that we choose – not ones chosen for us – make our own decisions, and move forward with our lives. The pandemic has had its claws and fangs in America for far too long, and it’s time to slay that beast, permanently.

Matthew Betley is a former Marine officer, a recovering alcoholic, an advocate for victims of toxic exposure to Burn Pits, and an internationally-published and award-nominated thriller author.  His latest thriller, THE NEIGHBORHOOD, about a gated community under siege in the middle of the night, arrives in August 2022, but you can pick up his Logan West series here. Follow him on Twitter at @MatthewBetley or find him on Facebook and Instagram.