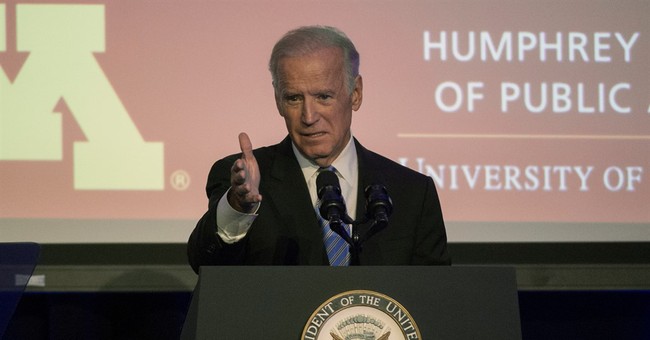 Vice President Joe Biden’s decision not to run for president may signal the final extinction of an already endangered species: the national “pro-life Democrat.”

Biden himself was only pro-life in the most marginal sense, but even that set him apart from the Democratic Party’s increasingly extremist dogma on abortion.

Democrats have come a long way. Forty years ago, the likes of Al Gore, Ted Kennedy, and Jesse Jackson were strongly pro-life. That changed leading into the 1990s, when pro-life Pennsylvania Governor Robert Casey was rejected as a speaker at a Democratic National Convention.

President Bill Clinton used abortion rhetoric that sounded moderate—”safe, legal and rare”—but by the end of his presidency was vetoing even a ban on partial-birth abortion.

Joe Biden resisted this drift for a while. During Pope Francis’ recent visit to the U.S., Biden told the Jesuit-run America Magazine that there’s “absolutely, positively” a place in the Democratic Party for pro-lifers.

He said he opposes abortion but only as a theological doctrine, one that he cannot “impose” on others. (He failed to explain whether “imposing” an abortionists’ knife on an unborn child is a mere theological matter.)

Biden may have realized his position on abortion would be a stumbling block in his nomination bid. In anticipation of his candidacy, Michelle Goldberg of Slate warned that “A Biden Presidency Would Be Grim News for Feminism.”

Goldberg’s evidence consisted entirely of the fact that, unlike national Democrats today, Biden has opposed both partial-birth abortion and taxpayer funding of abortion. (To call this a threat to “feminism” itself apparently reduces feminism to nothing more than the outer limits of abortion license.)

Biden also pushed back on forcing religious groups to cover early abortion items and birth control through Obamacare. He certainly would not have made the items illegal, and would have arranged for women to get them free another way, as long as religious employers did not have to provide the coverage themselves. President Obama and his more strident advisors overruled Biden’s view.

Running against Secretary Clinton would have put overwhelming pressure on even Biden’s modest position against late-term and taxpayer funding of abortion. Republicans would have driven that wedge issue even harder by pointing to three bills on which Congress voted this year.

Since August, Congressional Republicans have brought to a vote three measures that only modestly scale back on societal involvement in abortion, and that hit the heart of what Biden has claimed he is still willing to oppose: late-term and taxpayer-funded abortion.

What should have been the most bland measure, objectively speaking, is the Born-Alive Abortion Survivors Protection Act. BAASPA penalizes destroying the life of a baby not in the womb but after its birth, if the baby was born alive during an abortion.

Federal law defined such babies as persons in 2002, but that bill did not create actual penalties for their killing. The 2002 measure was so unopposable that Democrats avoided a roll call vote so they did not have to go on record opposing it, and it passed unanimously.

The 2015 Democratic Party is dominated by Obama’s view on abortion, not Biden’s. BAASPA passed the House in September 2015, but with only five Democrats voting in favor. President Obama has moved his party from near unanimous protection of infants born alive to near unanimous opposition.

In that atmosphere, Biden would have been unable to win the Democratic Party’s base or its donors. Whatever moderate credentials Biden earned for opposing abortions on babies partially born likely would have withered in the face of pressure to allow the killing of babies fully born.

Republicans would have put Biden’s pro-life marginalism to a second test with their ban on abortion after 20 weeks, the “Pain Capable Unborn Child Protection Act.” Only seven countries on the planet allow abortions this late, with the U.S. ranking alongside China and North Korea. In Europe, all but the Netherlands ban the practice. 60 percent of women in the U.S. oppose abortions that late.

The 20-week ban passed the House in May but fell to a Senate Democrat filibuster in September with only 54 votes to proceed. All Senate Democrats voted against it except three who are considered pro-life: Casey (PA), Donnelly (IN), and Manchin (WV).

This almost certainly means that Biden could not have maintained his marginally pro-life stance. Hillary Clinton, who called a state 20-week ban “extreme and unacceptable,” would have destroyed Biden’s ability to woo Democrat women’s groups if he supported the ban.

But if he opposed banning 20-week abortions, he would have departed from the only three senators in his party with a plausible claim to being a pro-life moderate.

Biden would have also been cornered by the issue of Planned Parenthood funding. The vice president has touted himself as an opponent of federal funding of abortion in general, and no one performs more abortions than Planned Parenthood.

It’s true that Democrats claim Planned Parenthood’s federal funding does not go to abortions directly (ignoring the fungibility of money). But there are almost 20 times as many federally qualified community health centers that offer actual comprehensive women’s health care without Planned Parenthood’s abortions or baby harvesting.

Biden would have had a hard time refusing to redirect Planned Parenthood’s money to centers that offer women’s health without the baggage of Big Abortion.

Meanwhile, Clinton, who after initially reacting negatively to Planned Parenthood’s baby harvesting enterprise, quickly repented of her discomfort. She would not have let Democrat voters forget it if Biden said he would remove Planned Parenthood from the public teat.

Had Biden run, he might have simply tried to dodge the specifics of his pro-life marginalism, and the mainstream media might have allowed that for a while. They have grilled Carly Fiorina on abortion, while refusing to bring it up at all during the first Democratic debate and Clinton’s most recent CNN interview.

Nevertheless, Biden would not have been able to avoid taking a position on these three Republican bills for an entire primary campaign. All three measures hit the abortion lobby and Biden’s pro-life label at their weakest: late-term abortions, public funding of abortion organizations, and babies born alive.

Biden’s exit from the national scene finalizes the Democratic Party’s extermination campaign against pro-lifers in their national ranks. That campaign eliminated fully pro-life Democrats from national aspirations in 1992.

In 2015, President Obama and Secretary Clinton finished the job. Even the most marginally pro-life Democrat who would allow abortion full-scale except at its late stages and with taxpayer money cannot seek national influence.

Sure, a pro-life Democrat might win a senate race locally, say in Indiana or West Virginia. But with Vice President Biden’s departure, no Democrat can support even the slightest restriction on abortion. National Democrats require abortion on demand, without apology, and paid for and facilitated by every citizen.