You Blew It, Kasich, Move Aside

Matt Barber
|
Posted: Feb 28, 2016 12:01 AM
Share   Tweet
The opinions expressed by columnists are their own and do not necessarily represent the views of Townhall.com. 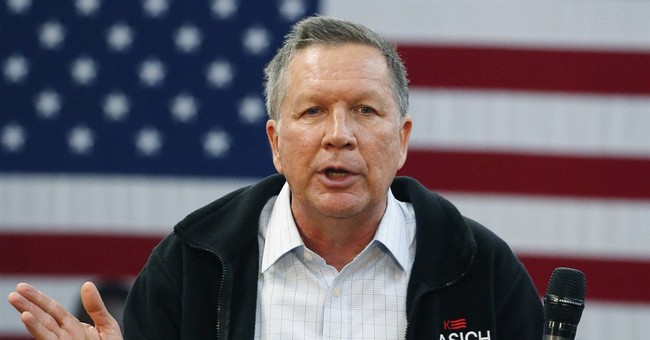 Much will be written about the utter thrashing GOP presidential front-runner Donald Trump took at the hands of the far-more prepared, knowledgeable, qualified and otherwise principled Sens. Ted Cruz and Marco Rubio during Thursday night’s Republican presidential debate on CNN. I will, therefore, focus, instead, on another Republican candidate who’s absolutely got to go: Ohio Gov. John Kasich.

Many thanks to Hugh Hewitt for asking the question. In a campaign where the noise of myriad, and in many cases less critical, issues has drowned out the single greatest threat to God-fearing Americans’ individual liberties – the secular left’s tireless efforts to end our constitutional religious free exercise and freedom of conscience – Hewitt exposed John Kasich as an avowed enemy to the First Amendment and a devoted ally of Democratic sexual change agents.

In one exchange, Hewitt said, “Senator Cruz mentioned the issue that keeps me up at night, which is religious liberty.” He later added, “Governor Kasich, back to religious liberty. You’ve been a little bit less emphatic. You’ve said, same-sex couple approaches a cupcake maker, sell them a cupcake. Can we trust you as much on religious liberty as the rest of these people?”

Kasich went off the rails. The New York Times summarized his response thusly: “Mr. Kasich went further than any of his rivals in dismissing – even belittling – the idea that businesses should be able to claim religious freedom and allow them not to cater to gay and lesbian couples.”

“Religious institutions should be able to practice the religion that they believe in …” he said, “but, look, the court has ruled and I’ve moved on. And what I’ve said, Hugh, is that, look, where does it end? …

“I mean, if you’re in the business of commerce, conduct commerce. That’s my view. And if you don’t agree with their lifestyle, say a prayer for them when they leave and hope they change their behavior.

What a cop out. What a straw man. What a maroon.

Kasich lacks even a rudimentary understanding of the First Amendment and freedom of conscience. He’s a threat to our first freedoms. No less so, in fact, than Oligarchy Obama, High-handed Hillary or Bolshevik Bernie. His evasive twaddle about, “Religious institutions should be able to practice the religion that they believe in,” betrays his utter ignorance of the U.S. Constitution and our nation’s founding. Not because it’s untrue, but because it’s intentionally incomplete.

The First Amendment follows, not only the religious institution, but the individual American citizen – be he a butcher, a baker or a candlestick maker. The Constitution secures both religious free exercise and liberty of conscience. It protects individual rights first, and institutional rights thereafter.

“Americans are guaranteed the freedom to live and work consistent with their faith,” notes Alliance Defending Freedom (ADF) attorney Jeremy Tedesco. “Government has a duty to protect people’s freedom to follow their beliefs personally and professionally rather than force them to adopt the government’s views.”

Indeed, religious liberty is non-negotiable. Freedom of conscience is the bedrock of American society. Today’s anti-Christian lynch mob, which evidently includes John Kasich, indignantly imagines that some newfangled “gay right” to not be offended trumps the First Amendment. Those who believe so are not only on the wrong side of the U.S. Constitution and history, they’re on the wrong side of public opinion.

Consider, for instance, a 2015 Marist poll which established that, by a 2-to-1 margin, Americans reject the very kind of anti-Christian penalties and fines Kasich supports. Christians “in the business of commerce,” as he flippantly calls them, are, even now, being persecuted by left-wing “human rights” Star Chambers with increasing frequency and intensity.

Christian clerks, judges, bakers, florists, innkeepers, caterers, photographers and a litany of other small-business owners from coast to coast are being summarily harassed, sued and even jailed, not because these Christian individuals won’t “serve gays” (they will and do without hesitation), but, rather, because they politely decline to spend their time and talent contributing to, and thereby endorsing, the message behind specific events that run counter to biblical principles and otherwise infringe their deeply held religious convictions.

Let us be direct. According to the unequivocal moral precepts of biblical Christianity, explicit throughout both the Old and New Testaments, homosexual behavior is sin. Sin is evil. Homosexual behavior is the central, defining characteristic of counterfeit “gay marriage.” Therefore, “gay marriage” is evil. Christians are obligated to avoid sin – to “do no evil.” “Or do you not know that the unrighteous will not inherit the kingdom of God? Do not be deceived: neither the sexually immoral, nor idolaters, nor adulterers, nor men who practice homosexuality … will inherit the kingdom of God” (1 Corinthians 6:9-10).

It’s really that simple. This is why, dear homosexual, as faithful Christians (apostate “Christians” notwithstanding), we will never have anything whatsoever to do with your pagan, sin-based “same-sex wedding” rituals.

We will not bake your fake wedding cake.

We will not arrange your fake wedding flowers.

We will not take your fake wedding pictures.

We will not host your fake wedding reception.

(And we will, most certainly, not be voting for you, Gov. Kasich.)

To be sure, we will not do these things because to do these things is to disobey God. It is to aid you in your sin – to cause you to stumble, which, in and of itself, is to layer sin upon sin. “It would be better for him if a millstone were hung around his neck and he were thrown into the sea, than that he would cause one of these little ones to stumble” (Luke 17:2).

While we all fall short of His glory, the history of God’s people has shown that no unjust law or arbitrary court ruling presuming to force us to do otherwise, will ever make us disobey God in this or any other regard. I realize, my “LGBT” friends, that forcing others to affirm that which offends God makes you feel better about your sin for a time. I also realize that it infuriates you when we refuse to join in as you attempt, ineffectively, to justify your wickedness by calling it “marriage.”

This is nothing new. We Christians have been infuriating pagans by refusing to bend on truth for over 2,000 years.

And we will continue to do so until Christ returns.

So, it’s time for John Kasich, the sole remaining liberal RINO in this race (aside from Trump), to drop out. He was never going to be president of the United States anyway, but on Thursday, he found the one free spot in his political coffin to hammer home the last nail.

You blew it, governor. Move aside.