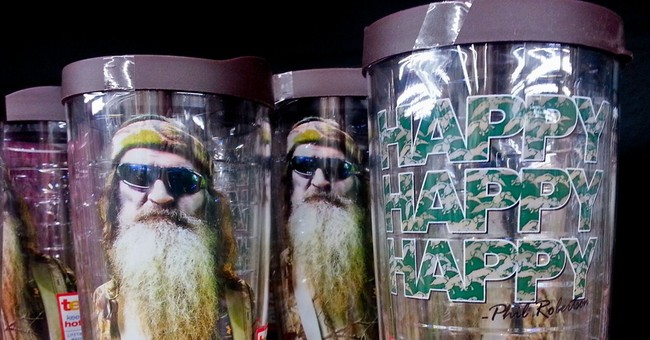 In clear violation of op-ed protocol, this week I’m suspending prose and having a little good, clean, limericky fun at liberals’ expense because – well, because they just make it so darn easy. (Warning: Some are bad and others worse. Side effects may include groaning, nausea, vomiting and involuntary eye-rolling.)

Here they are in no particular order. Happy New Year, and may God bless you in 2014! (Yes, you too, my liberal friends.)

Duck Flap
There once was a fella named Phil,
With truisms liberals found shrill,
Though they cried for his head,
They got duck-slapped instead,
As old Phil just continues to chill.

GLAAD Tidings
There once was an outfit called GLAAD,
That when faced with the Truth gets real mad,
Though they pout and they fuss,
And they stomp and they cuss,
They alter the Truth not a tad.

Low Ratings
M – S – N – B – C is on cable,
Spinning news, weaving yarns and tall fables,
With an agenda from Sodom,
And ratings rock bottom,
They have hosts that are questionably stable.

Occupy This
Occupy Wall Street did sizzle,
But in 2013 it did fizzle,
As we all remained patient,
They returned to mom’s basement,
With outrage that proved artificial.

Healthcare.gov
The Obamacare roll-out disaster,
Made media question their master,
But doubt was short-lived,
As the suck up revived,
To the din of conservative laughter.

Fore!
There once was a man from Chicago,
A golf aficionado,
Who teed off on our freedom,
And caused speech induced tedium,
Empty suit with a hopey-change motto.

Thanks, Michelle
There once was a chain-smoking POTUS,
Who gave children a lunch lady FLOTUS,
She swapped meat, sweets and bread,
With beansprouts instead,
Adding tofu and seaweed for bonus.

New Constitution
Of Obama’s Amendments least favored,
He finds First, Fourth and Second ill-flavored,
If you’d just shut your mouth,
And disarm there, Deep South,
He could kick in your door most unlabored.

“Gay Marriage”
The Supreme Court did redefine marriage,
And defenders of marriage disparage,
Newfound “right” they pretend,
Has Stephan to wed Sven,
Yet no Sally means no baby carriage.

Cruz Control
There once was a leader from Texas,
Whom RINOs did label as reckless,
Spoke a day without resting,
All his critics thus besting,
With a smack-down on federal excesses.