Obama's Agenda is So "Gay" 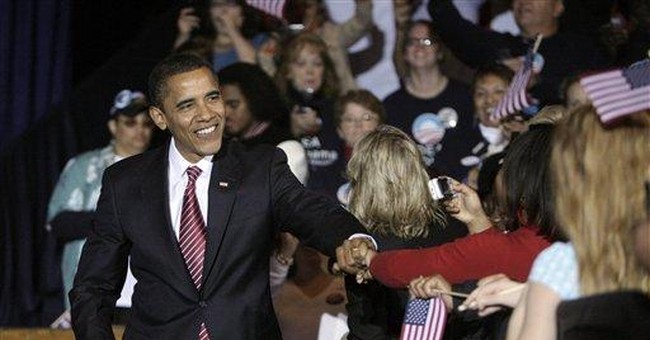 If Bill Clinton was the first black president, Barack Obama, if elected, will be the first "gay" president. No, I don't mean he'll personally decorate the West Wing, open a bathhouse in the Rose Garden or take up with Barney Frank. I mean he'll be the most radically pro-homosexual, anti-family president in history. He's very quietly pledged as much to the homosexual "Human Rights Campaign" and other fawning members of his homofascist fan club.

In the wake of the current economic crisis, neither presidential candidate is talking much about social issues. But in the months and years preceding this election cycle, Obama did plenty of talking. Unfortunately, most people have no idea what he's said. If the mainstream media would do its job, quit shilling for their ideological messiah and objectively report on Obama's unwavering fidelity to extremist homosexual pressure groups, many of his unsuspecting supporters might kick him to the curb. Hence – radio silence.

You may have heard the term "San Francisco values" bandied about from time to time. These values do not so much derive from a geographical locale as they do from a shared, deeply engrained "progressive" worldview – a worldview marbled throughout in murky tones of secular humanism and moral relativism. Central to San Francisco values is the notion that the only thing immoral is to reckon there are things immoral.

Still, don't take my word for it. Obama's own words betray his veiled extremism. Despite a series of utterly hollow and politically expedient platitudes to the contrary, the overwhelming weight of the evidence indicates that Barack Obama fully endorses the postmodern concept of "same-sex marriage." He's promised homosexual activists – in hushed tones – that if elected, he'll do everything possible to make it happen.

The only thing keeping counterfeit "gay marriage" from spreading state-to-state is the federal Defense of Marriage Act. Due to the U.S. Constitution's Full Faith and Credit Clause – which requires that states respect the "public acts, records, and judicial rulings" of other states – "gay marriage," without DOMA, becomes a communicable social malady. DOMA is a boost of penicillin in America's arm. It inoculates states from being forced to recognize counterfeit marriages from other states like California, Massachusetts or Connecticut.

In 2004, Obama called DOMA an "abhorrent law" and said, "The repeal of DOMA is essential. … For the record," he continued, "I opposed DOMA in 1996. It should be repealed and I will vote for its repeal on the Senate floor. I will also oppose any proposal to amend the U.S. Constitution to ban gays and lesbians from marrying." Obama also came out earlier this year in favor of the May 15 California Supreme Court decision that unilaterally redefined natural marriage in that state to include same-sex duos. "I want to congratulate all of you who have shown your love for each other by getting married these last few weeks," Obama gushed. Despite assurances otherwise, these are not the words or policies of a man who opposes "same-sex marriage."

But Obama's contempt for the sanctity of natural marriage is only the beginning. As a candidate for the highest office in the land, his hostility toward the tens of millions of Americans who respect traditional sexual morality is unprecedented. He has enthusiastically signed off on every demand of militant homosexual pressure groups. Said Obama, "We must be careful to keep our eyes on the prize – equal rights for every American. We must continue to fight for the Employment Non-Discrimination Act (ENDA). We must vigorously expand hate-crime legislation and be vigilant about how these laws are enforced. We must continue to expand adoption rights to make them consistent and seamless throughout all 50 states, and we must repeal the 'Don't Ask, Don't Tell' military policy."

So, let's break it down. If elected, Obama has promised to sign radical thought-crimes legislation into law, effectively criminalizing respect for biblical morality. These laws would punish those who oppose sexual behaviors that every major world religion, thousands of years of history and uncompromising human biology have coldly rejected.

ENDA and "hate-crimes" legislation will unconstitutionally compel Christians and other people with traditional values to abandon those beliefs and adopt – under penalty of law – the postmodern "anything goes" view of human sexuality. Such "sexual orientation" laws have been the precursor to even more oppressive "hate-speech" laws in Canada, Great Britain and throughout Europe. But as Obama has signaled, these laws will not remain confined to his beloved Europe. There is little doubt that such laws will be similarly enforced here in the U.S under his administration. If you happen to believe that God created human sexuality to be shared between husband and wife within the bonds of marriage, you'd better not say so or you'll suffer very real consequences.

Still, Obama's loyalty to America's sexual anarchists doesn't stop there. He's additionally sworn to turn the U.S. military into a cultural petri dish. Having no military experience of his own, he would nonetheless arrogantly disregard the vast majority of our military leaders and allow open homosexuals and cross-dressers to infiltrate the ranks of the armed forces – during a time of war – thereby disrupting military readiness and unit cohesion. To use the armed forces for such radical social experimentation is both dangerous and gravely irresponsible.

Finally, Obama's promise to require "gay" adoption in all 50 states is particularly troubling. Here, his blind arrogance billows over. Once again he and his homosexual activist cohorts presume to know better than both God and science. As if common sense weren't enough, studies have firmly established that children are best served with both a mother and a father. Although it's not always possible, mom and dad each provide unique qualities vital in healthy child development. To selfishly place untold thousands of children in intentionally motherless or fatherless homes so that Chad and Thad can dress up and play house represents the height of narcissism.

So yes, if elected, Barack Obama – the "change candidate" – will undoubtedly live up to his name. He will certainly institute sweeping change over the next four to eight years. But as you walk into that voting booth on Nov. 4, consider whether Obama's brand of change is change America can afford. Because isn't change – for the mere sake of change – really just chump change?