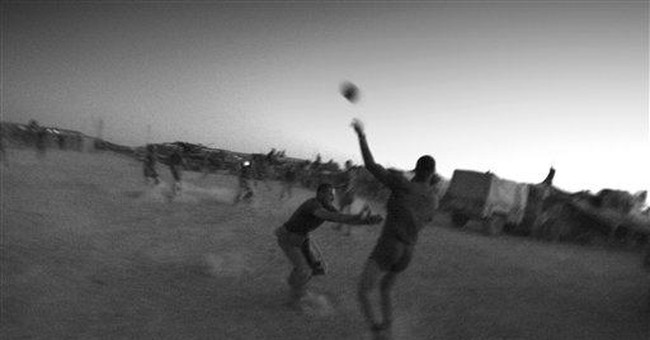 When the champions of the comeback season of “American Gladiators” won their titles, there were no touchdown dances, trash talkers, or T.O. temper tantrums in the Gladiator Arena—the strobe-lit home of the muscled, tanned forbears of today’s reality TV.

Instead, 32-year-old Monica Carlson hugged her twin daughters while her husband beamed, “I couldn’t be more proud,” said Chad. “It’s a great, special moment for her and for our family.”

Evan Dollard, the 25-year-old male champion, dedicated the win to his mom. “I wanted this to be a special moment for my family, my friends, everybody watching at home—Especially for my mom,” who died of cancer before he started the competition. “I love her. I was doing that for her,” he said.

The runners-up—one a teacher and coach, the other a fitness trainer, both of whom work with teenagers—congratulated the winners and thanked their families for support.

NBC’s re-launch of the cult classic competition show (original run: 1989-1996) may have been an attempt to wring a dribble of new entertainment from the writers’ strike drought, but the success of the show and those who competed is refreshing.

These days, the beauty of tough, fair, red-white-and-occasionally-black-and blue competition is easily lost on all the societal hand-wringing about its side-effects.

Children are either taught that competition should be avoided at all costs (Anyone for non-competitive Field Day or Cooperative Self-Esteem Raising?), or trounced at all costs (What’s the line on the little-league sideline fight between Jimmy’s and Tommy’s dads this weekend?).

They’re taught, by turns, to fight for nothing (Violence is never the answer.) and to fight over everything (Did you just scuff my Pumas?).

But beyond the cartoonish growls of the show’s body-builders-turned-Gladiators with equally cartoonish personas—Wolf, Titan and Crush, to name a few—the whole affair is aggressive but not arrogant, the competitors intense, but not inflated.

After eight weeks of single-elimination competition for each sex, and steroid tests for all involved, the process is more meritocratic than the Bowl Championship Series and possibly cleaner than a couple of World Series. And, watching 130-lb Monica go up against the Gladiators, whose passion for Spandex is exceeded only by their passion for weightlifting, has a pleasing Eli Manning vs. Tom Brady emotional pay-out.

The winners and runners-up could not have been more gracious, scrubbed, apple-cheeked and all-American, throwing into grotesque relief the Tila Tequilas and Kim Kardashians of today’s oversexed, indulgent reality TV culture, where the only competition that matters is the hotly contested sprint to the bottom of the barrel.

Here’s hoping that the show’s ratings romp—it garnered the best numbers in the valuable 18-49 demographic of any new show this season and an average of about 12 million viewers, beating out, among others, the gratuitous and indulgent “Sex and the City” copy, “Cashmere Mafia”—reflect an affinity for clean-andsimple competition that’s big enough to bring it back for a couple more years.

The same principles have made “American Idol” one of the most watched shows on television. TV producers lend a glitzy stage and some slickly produced glamour to the underdog stories of normal, talented Americans, stand back, and watch them succeed.

It’s no secret why it works. If I may, for perhaps the first time in history and to the dismay of generations of economists, turn Adam Smith into a TV critic: “Where competition is free, the rivalship of competitors, who are all endeavoring to justle one another out of employment, obliges every man to endeavor to execute his work with a certain degree of exactness... Rivalship and emulation render excellency.”

Were he alive today, he would likely have added a footnote for Sanjaya as a “market distortion,” but if we had such men writing for TV Guide, we’d never lay it aside to watch TV.

Monica and Evan are already slotted to come back next season as Gladiators themselves, though their squeakyclean images don’t lend themselves to conventional Gladiator names. Scooter and Cutey-Pie just don’t have that edge, but I’m sure with a host named Hulk Hogan, the show will think of monikers foreboding enough for the new kids.

This year, the contestants of “American Gladiators” succeeded in bringing a clean, meritocratic celebration of both the martial spirit and the individual to primetime TV. I dare say any conservative could be proud to watch.

The Day of Reckoning For Woke CEO’s is at Hand.
Townhall
Christina Pushaw ready to fight fire WITH FIRE when it comes to Democrats pushing to tax churches and BOOM
Twitchy
Biden's Confusion Hits Absurd Peak in South Korea
Redstate
Happy News Weekend Roundup: Hillary Getting Spanked in Court and More!
PJ Media