The Atheists Who Try to Steal Christmas 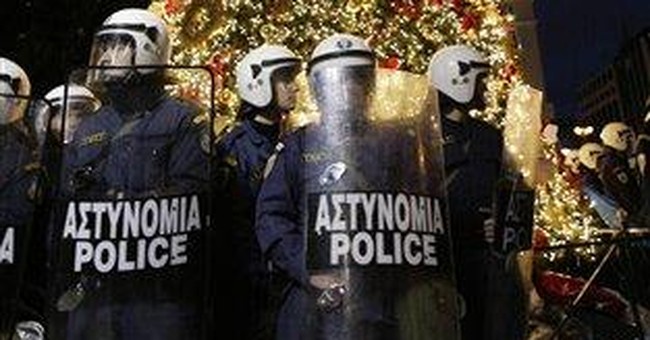 Tis the season. . .  for atheist Grinches to display their hatred of Christmas by trying to stomp out one of the most visible displays of Christianity in a country founded, and still operating on, Judeo-Christian principles.

A group called Freedom From Religion began in the state of Washington, where they posted their anti-Christmas sign next to a manger display in the Capitol.  They have since continued on cross country to Wisconsin and Illinois, with their sign that reads in part, “At this season of the winter solstice, may reason prevail . . .  . There is only our natural world.  “Religion,” the sign says, is nothing but “myth” and “superstition.”

Abetting such efforts are preemptive capitulations like that of the library staff of the University of North Carolina at Chapel Hill that decided to forgo a Christmas tree.

While the Freedom From Religion Foundation (FFRF) aims its legal and propaganda guns at Christianity, some like CNN’s Mike Galanos call their attacks as directed on “people of faith.”   On their website, FFRF titled this CNN segment “FFRF vs. Christian Crybabies.” Although a menorah had been placed next to the Christmas display, it is Christians who are called “Crybabies.”

FFRF likes to use other occasions for their attacks.  For the seventh anniversary of 9/11, FFRF placed an ad  in the New York Times with the Twin Towers skyline, headlined “Imagine a World Free From Religion.”  They warned, “American liberty is menaced not only by religious terrorism from abroad.  Consider the growing threat of religious fanaticism here at home: The relentless war against secular values, gay rights, abortion rights, stem cell research and the teaching of evolution in public schools.”  No mention was made of “the growing threat” of Islam, like separate Islamic public schools and various efforts to teach Islam in schools.  Instead, the group goes after Christians who object to the teaching of an atheistic Darwinian doctrine to the exclusion of other scientific theories like intelligent design.  In their ad the group bragged, “FFRF has stopped public funding of pervasively sectarian social agencies and schools, halted a state chaplaincy to proselytize government workers, ended unlawful bible instruction in public schools, persuaded a Top Ten university to drop commencement prayers, and won a court victory overturning a law declaring Good Friday a state holiday.”  While the group aims their sights at Bible instruction in schools, director Annie Laurie Gaylor told me that she had not even “heard of the controversy” regarding the establishment of a PUBLIC MUSLIM SCHOOL in New York City.

Their attempt to subvert Christmas with a claim that it is simply a superstitious appropriation of the solstice resembles other attempts to diminish and ultimately wipe out Christianity.  Contrary to the claims of college campus atheist debaters who like to throw out the falsehood about “Christian Nazis,” the literature of the Nazi regime reveals a deliberate attempt to transform Christmas into a pagan holiday in line with the pagan ideological goals of the Nazi regime.  While the other socialists, the communists, presented a full frontal assault on religion (meaning Christianity) by dismissing it and denigrating it as the “opiate of the masses,” the Nazi socialists were a bit more clever.

For example, in a Nazi journal article, “New Meanings for ‘Inherited’ Customs?” archived by Calvin College’s Randall Bytwerk, author Hannes Kremer calls for creating “new ideas and new customs,” while also adjusting “those customs which have grown out of the people to the new ‘community of the Germans.’”  These customs would be given new “content,” i.e., that which would advance the goals of national socialism over traditional Christian beliefs.

Similarly, Nazi Wilhelm Beilstein, in a 1939 brief titled “How We Celebrate Christmas,” advises taking the Christmas traditions back to their pagan roots, thus using them to promote the national socialist ideal of the “eternal life force of our nature”—a nature predicated on the belief in the biological superiority of the race.  To “deepen and enrich” Christmas traditions, Beilstein recommends celebrating the winter solstice with “community fires.”  In language similar to that being bandied about today by “change” enthusiasts, Beilstein suggests that such a new/old tradition would promote “unity”; it “signifies the being and growth of our people’s community from the spark of the worldview that the Fuhrer lit in our hearts.”  (Need we mention commemorative plates, collections of wise sayings, or the declaration of a Barack Obama holiday in at least one county?)

On Fox News a bearded and bedraggled self-described “progressive” from Massachusetts opined that he was too sophisticated for such a silly superstitious holiday as Christmas: He was going to celebrate the winter solstice.  Drumming around the bonfire, now that is based so much more on reason than are Christian traditions!

The educationists have maligned Christianity, but even secularists, if they are intellectually honest, have to acknowledge that our form of democracy has its roots in Christianity.  Alexis de Tocqueville in Democracy in America wrote, “there is no country in the world where the Christian religion retains a greater influence over the souls of men than in America; and there can be no greater proof of its utility and of its conformity to human nature than that its influence is powerfully felt over the most enlightened and free nation of the earth.”

The usual suspects will complain that Tocqueville was writing about a “free nation” that hypocritically practiced slavery.  The atheists will point to the stories of rape, pillage, and murder in the Old Testament.  What about Abraham’s willingness to sacrifice his son Isaac at God’s command? they predictably retort.

What they forget, or don’t know (thanks, public schools), is that child-sacrifice was common among polytheistic, “pagan” religions.  (Think about that as you worship magical Nature during the solstice.)  The Old Testament story serves as illustration of God’s mercy and a foretelling of the coming of the Savior.  And, one more time, the American abolitionist movement was a fundamentally Christian movement, as are many movements today to end slavery still being practiced in non-Western countries.

One needs to ask then why a group that claims to advocate “Freedom From Religion” selectively attacks the Christian religion.  If they’re so proud of eliminating commencement prayers, why haven’t they questioned calls to prayer during Ramadan and footbaths for Muslims on campuses?  Or what about prayer rooms in one our nation’s airports?  What about this Stealth Jihad?

What about it, brave free-thinkers?  Come on: I want to see a debate with a Muslim advocacy group.  I want to see it linked on Freedom from Religion’s website with the title, “FFRF vs. Muslim Crybabies.”