A Health Risk We Parents Can Eliminate 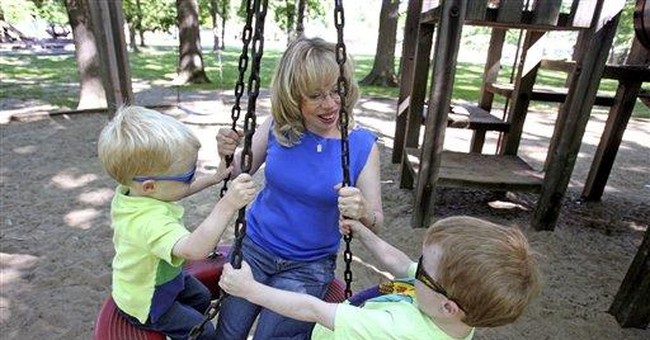 It’s time to pull out the blood pressure cuff, and I’m not suggesting this as a do-it-yourself health care solution, though by the looks of things, it could come to that. Given the reforms suggested so far, DIY may be a viable alternative.

As if there isn’t enough political news to elevate our national blood pressure, a new study released this week in the Archives of Pediatric and Adolescent Medicine says blood pressure levels of America’s children are elevated thanks to… drum roll because you’re going to be shocked by this… TV and screen time.

Just when you thought it was safe to park your child in front of a television set for six or eight hours on end to watch every manner of questionable – even depraved – human behavior (MTV’s “Real World: Cancun” anyone?), it turns out it’s not just media content that endangers child health but the very act of consuming media.

Experts from several Midwestern research universities studied children ages three to eight who spent five hours per day in various modes of inactivity. They controlled for physical composition and other health factors, and what they found is that 1.5 hours a day in front of the TV and/or playing video games actually elevates kids’ blood pressure, regardless of whether children are overweight.

Proving, perhaps, that children instinctively know bad media when they see it, though the research didn’t confirm this as fact.

Bottom line: excessive amounts of TV and screen exposure are unhealthy. Thanks, researchers, for spending the time and money to publish this conclusion because sadly, parents in our culture lack the common sense to figure this out on their own.

Unfortunately, all the research in the world isn’t enough to compel parents to pull the plug and send children outside to play. In fact, while playing outdoors is still the healthiest and safest way to recreate, parents – propelled into fear thanks to the time they themselves spend on 24/7 news sites – believe that even the end of the driveway is too far from home to be considered a safe distance.

Lenore Skenazy, author of Free Range Kids, says it’s not only the fear of creepy strangers that keeps kids indoors, but also the fear of parental shame and blame. Parents know that the likelihood of a random kidnapping is low, but the likelihood that Nancy Grace would chronicle your child’s abduction on CNN and make you look like a lousy parent is 100 percent. Those odds strike fear into the heart of every mom or dad.

Consequently, parents succumb to the irrational fear that playing outside is unsafe, while watching TV in the family room or zoning out in front of a video game in a dark basement are things you can do to avoid imminent danger.

Once again, our parenting compass is pointing to “due wacky.”

In truth, it’s not the blood pressure research that is causing me to lament the change in the way our children recreate. It’s the fact that on any given sunny summer day, you can shoot a cannon through my neighborhood and not hit a living creature.

We’ve reached August and my 11-year-old daughter has created so many imaginary friends with whom to spend her summer that I may need to have her evaluated for dissociative identity disorder.

We already had enough reasons to limit the time our children spend in front of an electronic screen before this evidence about the impact on blood pressure. How about we parents step up to the plate and do what’s right for children. All it takes is the push of a button and a simple command: “Go outside and play.”