Marvin Olasky
|
Posted: Feb 15, 2021 12:01 AM
Share   Tweet
The opinions expressed by columnists are their own and do not necessarily represent the views of Townhall.com. 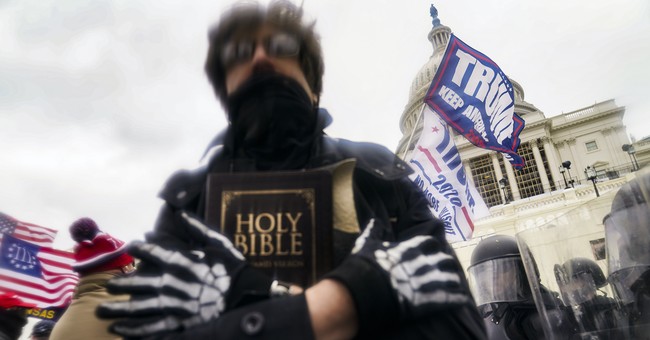 In one sense, the Sack of the Capitol on Jan. 6 was the farce that launched 1,000 snips.

Snip: “From years of covering white nationalists and the alt-right, I already knew that the right contained violent and anti-democratic elements,” Buzzfeed reporter Rosie Gray wrote. “What Jan. 6 showed was how deeply even the nice church ladies and retired grandpas who have nothing to do with those groups have descended into an alternate universe.”

Snip: You could have replaced Gray’s byline with that of Violet Blue, New York Chimes, or Scarlet Green, Chicago Baboon, and the words would have been almost the same. One message has been standard for years among liberals: The right is fascist. The new twist is extreme: Everybody run. The retired grandpa’s got a gun.

The D.C. insurrection would have been tragic rather than symbolic if Vladimir Lenin rather than Jacob Chansley—the farcical horn-wearing QAnon man—had been a leader of the pack. And yet, it’s concerning that some churchgoing chanters joined Chansley in fantasy land.

We should be careful with our critiques. It was rational to vote for Donald Trump in 2016 or 2020, given the Democratic opposition. It was also rational to say NO by writing in Ben Sasse or voting for the American Solidarity Party. But it wasn’t rational to believe in January 2021 that Trump would have a second term—yet millions thought it would happen.

Why? Much to my shame—but Christ’s fame for His ability to change lives—I lived in an alternate universe during 1972 and 1973, so I know ideological addiction. Four years of anti-war agitation had pounded me. I joined the Communist Party USA after media consumption that ranged only from The New Yorker (liberal) to The Daily World (Communist). In my bubble, I believed for a time that revolution would come if only I and others were bold and courageous.

Four decades of disparagement-by-media have pounded evangelicals. Many stopped reading and watching what mocked them. Many entered a right-wing news bubble. After the election, One America News and The Epoch Times became all the rage.

In 1972, one month after Richard Nixon’s landslide reelection, New Yorker film critic Pauline Kael said, “I live in a rather special world. I know only one person who voted for Nixon.” Some recent Trump voters know no one who voted for Joe Biden, so when I or other Worldlings described his victory factually, it’s not surprising that some said, Stop my WORLD subscription. I want to get off.

My Communist Party addiction lasted only 16 months, but even then I needed God’s merciful intervention to leave that drug behind. Others, though, may be able to regain a grip on reality by popping their right-wing-media-only or left-wing-media-only bubbles. One way to do this is by deliberately developing a Twitter stream that includes both liberals and conservatives.

This January I regularly received letters from media addicts asking about my own habits. These days I rarely consume television news or radio talk shows. But since I’m a conservative, I follow on Twitter liberals including Conor Friedersdorf, Emma Green, Michael Wear, Sarah Posner, Michelle Boorstein, Michael King, and Megan McArdle. I also follow conservatives, including unconventional ones like David French, Ross Douthat, Andrew Sullivan, and Rod Dreher.

After last year’s racial tension I wanted especially to read some Christians who are black, so among those I follow on Twitter are George Yancey, Esau McCaulley, Derwin Gray, Jemar Tisby, Glenn Loury, Mika Edmondson, Justin Giboney, and Trillia Newbell.

What else to do? Pray that Joe Biden will be more patriotic than partisan. He’s now the president of all of us. Pray that Christians won’t be fooled by Q or other gnostic heresies that pretend to have secret wisdom. Remember that our deeper problems are theological, not political. Elephant-riding Republicans eventually get stomped. Democrats who worship worldly wise-men are betting on the wrong donkey. Biblical objectivity exists. God is sovereign. Praise His plan, not mine or yours.